Formula 1 is finally moving into the ultra high definition arena following a conclusive trial at the Singapore Grand Prix and ahead of broadcasting the entire 2017 season in UHD.

Production and broadcasting last weekend was handled by F1 technical partner Tata in association with Sky, and included several state-of-the-art UHD cameras whose images were blended with those supplied by FOM's Broadcast Centre.

"The success of this proof of concept in Singapore shows that we're on track to show every race live in UHD next season using our next-generation Sky Q home entertainment service, and to continue to give our customers the action-packed F1 experiences that they crave."

UHD requires superfast network connectivity, the backbone of which could also be used for Formula 1's plans involving a Virtual Reality experience.

"Other game-changing technologies like Virtual Reality will rely on ubiquitous, superfast connectivity too," explained Mehul Kapadia, the managing director of F1 business at Tata Communications.

"As the break-neck speed of technology innovation continues, we'll work with Formula One Management to enable fans to experience the exhilarating world of F1 in new ways." 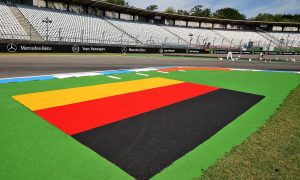