Sebastian Vettel believes his Turn 1 collision with Nico Rosberg in Malaysia has been over-analysed after he received a penalty for the Japanese Grand Prix.

The four-time world champion will take a three-place grid penalty at Suzuka this weekend as a result of causing a collision, having hit Rosberg at the start of the race in Malaysia. The incident - and resulting retirement - led to Vettel being heavily criticised by the Italian media but when asked if he was overdriving to try and make up for the qualifying deficit to Red Bull, Vettel replied: “No not at all.

"I went to the inside and obviously was able to go side-by-side with Max. As it turned out, I was probably a little bit too late in comparison to the first two cars but I make the corner, it’s not a problem, I’m not shooting straight like crazy so of course it is a risk and in that case it didn’t get rewarded.

"For sure it was quite bad for Nico because he had nothing to do with it. I phoned him up straight after and explained to him my point of view but sometimes these things happen.

"I think I’ve attacked quite a lot of cars in all the starts that I did in my life into Turn 1, and most of the time got away with it, sometimes I didn’t and I guess last time was one of the occasions where it just didn’t work.”

Asked if he is perhaps driving outside his comfort zone as a result of the close battle with Red Bull over second in the constructors' championship, Vettel replied: "No.

"Well I see where you might come from, obviously like I explained before what happened last week, I don’t think there is so much to analyse or so much to go through and other than that you try to squeeze everything you can from the car at any time.

"Sometimes you find yourself overdriving, I mean it’s not particular this year, last year or the year before, or whatever, I think you obviously try to achieve the best, sometimes you push too hard. It’s normal, it’s human, and sometimes you don’t push enough, so it’s about finding the sweet spot in the middle.

“I think usually we get there pretty well, we make quite big steps from Friday to Saturday with the setup, which of course is not a driving effort, it’s an engineering effort to get together with the team. In general we try to nail every part of the weekend, but, as I said, for sure we didn’t have the success, which for most people is the measure of if you nail everything or not.

"In that regard we haven’t been so successful but I think still, as a team, we have very good races, it’s been a very good team effort and I would say the spirit within the team is very high.”

Racing Max was on the edge but great fun - Ricciardo

Verstappen expects to be allowed to race Ricciardo in future 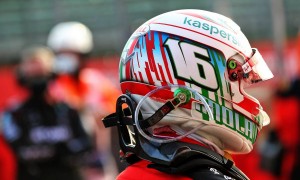 Leclerc: 'We expected something better' from Imola quali