There may be once again, sometime in the future, an Austrian driver on the Formula 1 grid if Lucas Auer proves his mettle.

The 22-year-old nephew of former Ferrari and McLaren driver Gerhard Berger is affiliated with Mercedes for which he races in the German DTM series, and his famous uncle has said that if he performs on a good enough level, he may be offered an F1 opportunity.

"If Lucas is to come into Formula 1 he needs consistent performances in DTM and an influential personality to help him," Berger told Speed Week.

"If one has the possibility to drive in F1, naturally you would have to look at it."

Auer's days of becoming Austria's next F1 exponent may be a bit off in the future, but Mercedes

"Before you run, first you have to learn to walk," Wolff told Krone newspaper.

"Should he make the next step, then I trust him to make the leap into Formula 1 as well."

Austria has produced two of Grand Prix racing's most iconic figures of course, with Jochen Rindt, who clinched the title posthumously in 1970, and Niki Lauda who collected three world crowns in 1975, 1977 and 1984. 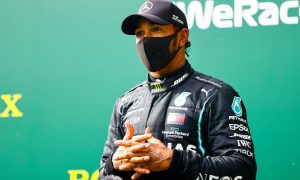