Toro Rosso has revealed the spectacular Formula One circuit its fans have brought to life following a year-long series of polls.

For each venue that hosted F1 in 2016, the Faenza-based outfit asked its supporters to select the turns, or sections of corners they like most.

“I must say it’s quite spectacular,” commented Toro Rosso ace Daniil Kvyat. “For sure, I’d like to drive this track, there are a lot of cool corners, all the best parts of each track.

“It would not be easy to find the perfect setup for this circuit but racing would be quite exciting. Drivers would like it a lot, though it’d naturally be very hard to have it in real life but it’s always good to dream, isn’t it?” 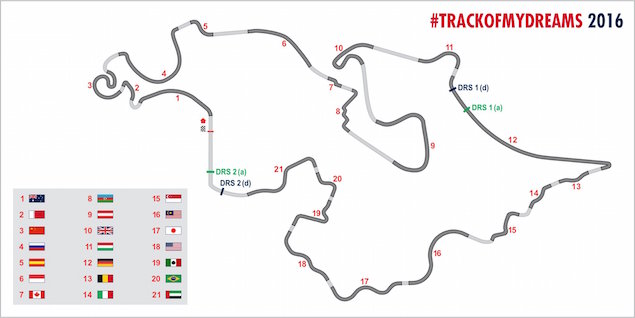 Talking about his favourite part of the circuit, the Russian added: “It would be the fastest corners, the sequence of Suzuka Esses combining with the Austin Esses. It would be hard for the tyres, but a great sector to drive with its high-speed turns.

“After the Hockenheim straight, there would an interesting overtaking spot, that’s why there is the first DRS zone. There would be other overtaking opportunities elsewhere and the track would be quite spectacular to drive in qualifying.”