Ever since he started his F1 career in 2007, Sebastian Vettel has always held in high regard two of his fiercest rivals.

Asked by French daily L'Equipe who the German considered the best driver he has raced against since his F1 debut, Vettel clearly set apart the man he replaced at Ferrari.

"The driver who gave me the most trouble in the championship was undoubtedly Fernando [Alonso]. In 2010 and 2012, it was really close. We also enjoyed a few great battles these past two years, like at Monza."

But Vettel was also quick to single out Lewis Hamilton. "I had a heard lot about Lewis when he was in karting but I had never competed against him before reaching F1. And it's a pleasure to race against him today."

Questioned about his ongoing season and any odd chance of winning the world championship, Vettel made it clear that the latter would remain out of reach this year. After the first three races, the Ferrari driver is currently 13 points adrift of Lewis Hamilton.

"One victory won't get you the crown. We'll have to win many more races in order to achieve that. Look at Mercedes performance level, in a normal race they get a one-two finish. So let's be realistic, our win in Malaysia was quite satisfying and fully deserved, but let's not forget where we were last year. But on the off chance that we are offered an opportunity to fight for the title, then you can be sure I'll take it." 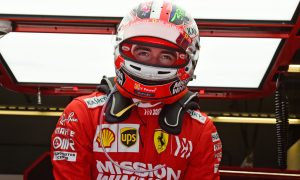