The 2008 Canadian Grand Prix stands out as Robert Kubica and the BMW Sauber team's single victory in Formula 1, and is a painful reminder that the Polish driver's potential will forever remain unfulfilled. 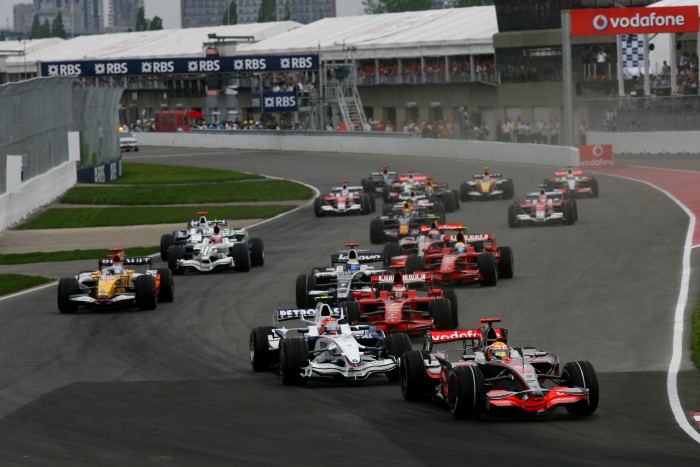 Lewis Hamilton leads Robert Kubica at the start of the 2008 Canadian Grand Prix.

The scene of his horrific crash a year before, the Circuit Gilles Villeneuve in Montreal definitely owed something to Robert Kubica in 2008. Perhaps even a watershed moment so fortunate and astonishing had been his dodging of mortality when his Sauber BMW careered off the track and slammed into a retaining wall with car-disintegrating force.

From the outset in 2008, Montreal was viewed as an opportunity for championship leader Lewis Hamilton to extend his petty point advantage over Ferrari drivers Kimi Raikkonen and Felipe Massa, each man having secured two wins since the start of the season. Proceedings got off to a rocky start thanks to a deteriorating track surface which the race organisers did their best to treat and patch up. But the contretemps didn't prevent Hamilton from securing pole.

Oblivious of the 'traffic signal', and with insufficient time to react, Lewis ploughed into the back of the Ferrari, putting both cars out on the spot !

When the lights went green the McLaren driver stormed off the grid and progressively knitted himself a comfortable cushion over Kubica, but then the safety car was deployed so the marshals could tend to the stranded Force India of Adrian Sutil. Most of the front-runners headed for the pits, but as a result of quicker stops, both Kubica and Raikkonen reached the exit of the pitlane before Hamilton and lined up alongside each other as they waited for the red light to go green. Oblivious of the 'traffic signal', and with insufficient time to react, Lewis ploughed into the back of the Ferrari, putting both cars out on the spot ! 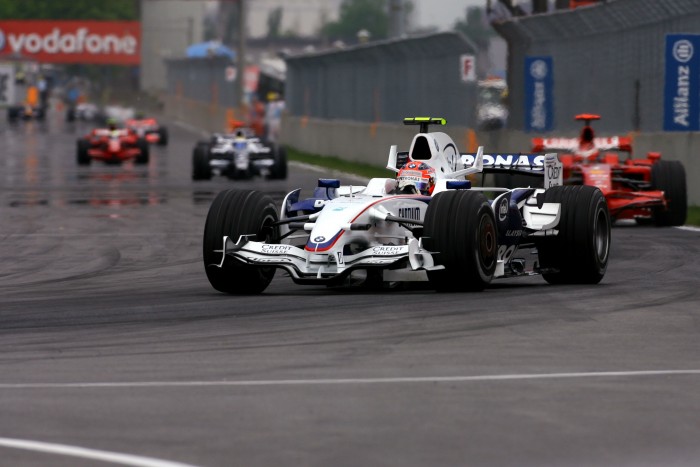 Kubica overtook team mate Heidfeld to take command of the race a little over the halfway mark.

As the lead rotated from one driver to the other, gradually following the string of pit stops, the Sauber BMWs of Heidfeld and Kubica eventually took command, but with the former on a one-stop strategy and the latter going for two, it was just a matter of time before Robert went ahead. The Pole pulled out all the stops and made a stirring run before his second pit stop to reduce the gap with his team mate, ultimately overtaking the German and leading the BMW duo home for a resounding 1-2 triumph.

In spite of his impeccable drive, after the race the Pole was quick to thank Hamilton for contributing to his maiden F1 win: "I have to thank Lewis for choosing Kimi rather than me, but it's also very fantastic to win my first race for BMW Sauber, which I joined from the beginning. We grew up together." 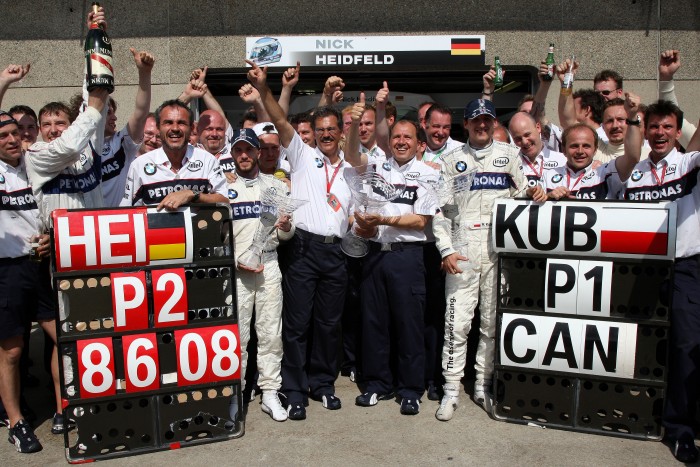 Indeed, a Grand Prix victory for both BMW and Robert Kubica was long overdue and while a new win in F1 is always popular, this one was particularly appreciated by all up and down the paddock. Today, it revives the memory of Kubica's great talent, unfortunately cut short in February 2011 when Robert was seriously injured in a crash at the Ronde di Andora rally.

After enduring multiple surgeries and a prolonged - and most certainly painful - rehabilitation process, Kubica did recover enough to drive again, although he focused his attention exclusively on rallying as persistent physical limitations would hinder his ability to drive in the cramped cockpit of an F1 car as a test in Mercedes' F1 simulator confirmed.

The fact that the Pole was able to race again at all, regardless of the category, was in itself a remarkable feat given the severity of his injuries. But a return to Grand Prix racing would seem one miracle too many, and an elusive prospect which Robert himself has finally come to terms with.