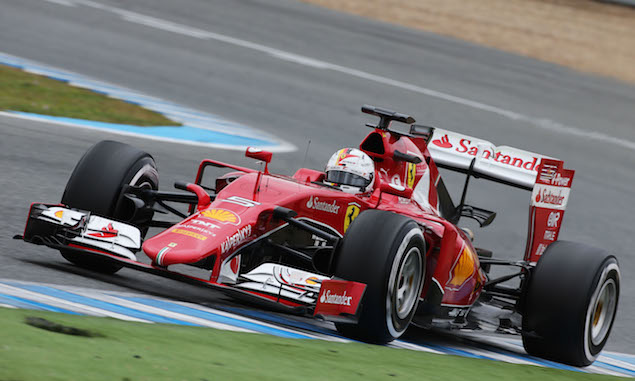 Ferrari’s Sebastian Vettel finished with the fastest time for the second consecutive day of testing at Jerez as McLaren struggled again.

Vettel improved on his time from the opening day to set the pace with a 1:20.984, leaving him almost 0.9s clear of the rest of the field. It continued the encouraging start for Ferrari, with 89 laps completed also being the second-highest total of the second day.

Ferrari announced it was focusing on set-up work and tyre testing throughout the day, with Vettel’s best time coming on the medium compound tyre. Once again Ferrari engines were first and second as Felipe Nasr was next on the timing screens for Sauber. Driving for the team for the first time after Marcus Ericsson was in the car on Sunday, Nasr completed 88 laps and also carried out some exploratory running in the wet during the final hour.

Honda was confident that it had fixed its power unit problems overnight after Fernando Alonso was only able to complete six laps on the opening day, but Jenson Button fared no better as he too was restricted to the same amount of mileage. McLaren said it was a “recurring issue” which was proving troublesome, with only one lap being completed in the afternoon.

Following Nico Rosberg’s impressive mileage on Sunday, day two wasn’t the smoothest day for Mercedes either. Lewis Hamilton had managed to reach 91 laps by the early afternoon and looked set for another large total but a water leak - which the team originally thought was a minor issue - caused him to stop in the pit lane and it transpired that a failed component had ended the defending champion’s day early.

Hamilton still ended up fourth ahead of Max Verstappen in the Toro Rosso and behind Williams’ Valtteri Bottas, with the Mercedes 1.5s slower than Vettel, while Bottas enjoyed a smooth day compared to both Mercedes and Red Bull -  the two teams to finish above Williams in the constructors’ championship last season - and ended his running early when a downpour hit the circuit with an hour to go.

Daniil Kvyat was getting his first taste of the RB11 but went off in the first sector and damaged the front wing, which was the only one available to Red Bull. As a result, Kyat was forced to complete a number of laps without a front wing as the team flew a new one out to Spain, failing to set a time.

It was a more positive day for Lotus, who surprisingly managed to get out on track within 90 minutes of the green flag on day two despite saying the E23 was unlikely to be ready to run until Tuesday. Pastor Maldonado had completed 41 laps and was 4.8s off the pace when he came to a stop approaching the final corner, causing the only red flag of the day.

Haas: “We’ll be ready in time”