In the build-up to next weekend's US Grand Prix, F1i revives the memory of the great Jim Clark's win at Watkins Glen in 1966. A unique milestone in the history of motor racing, the achievement was the first and only victory of a 16-cylinder engine in Grand Prix racing. They say the greatest ideas are the simplest. If you're going to build a 3-litre 16-cylinder racing engine then the most obvious way is to simply fold two 1.5-litre engines flat and stack them to create an H-16 configuration. And that is exactly what BRM engineers Tony Rudd and Geoff Johnson chose to do in 1966.

The highly unorthodox power unit was born out of an extensive rule change which came into effect that year and which doubled the displacement limit from 1.5 to 3 liters.

In order to reduce resources and development time, components like camshafts, valves and pistons were carried over. But as simple as the concept appeared, its design was anything but. So in a sense, the BRM H-16's simplicity was also its ultimate sophistication. Always the maverick, Lotus' Colin Chapman cast a curious eye over the strange and complex power unit, and decided to' give it a go' alongside BRM's factory entries in the second half of the 1966 season.

Newly signed Maurice Philippe was tasked to design a new Type 43 chassis which would host the compact but large engine which, due to its strength, would serve for the very first time as a structural member of the chassis. When Lotus took delivery of their first H16, the fact that it took six men to carry it from the van to the workshop was perhaps a foreboding warning!

Jim Clark first stepped into the BRM-powered Lotus at Monza where weight issues were relatively well masked by the formidable 400 horse power unleashed on the high speed track. The Scot even placed the car on the front row but after a poor start and a good run up the field, he retired altogether with a jammed gearbox. 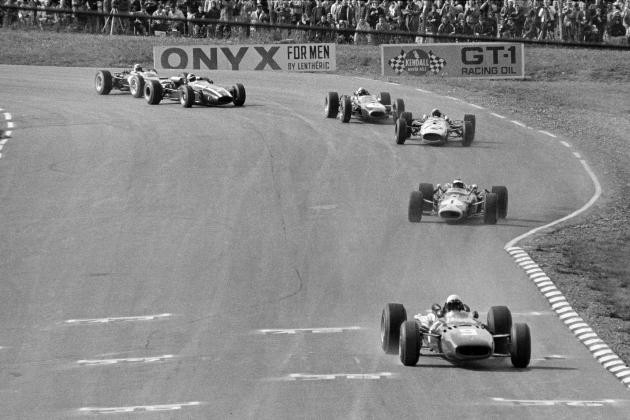 At Watkins Glen, Clark again secured a spot on the front row but drama ensued when his H16 engine failed in the final minutes of qualifying. Luckily, the BRM works team offered a tired but available spare to bolt onto the back of the Lotus for Sunday's race.

The World Championship had been settled in favor of Jack Brabham in Italy a month earlier so only honor, glory and a hefty purse were on hand to energize drivers' spirits.

Ferrari's Lorenzo Bandini got off the line to lead the field but was soon under threat from Clark, Brabham and John Surtees' Copper-Maserati. When Bandini retired with engine failure on lap 35, Brabham took command only for his own engine to expire 20 laps later.

Clark was left with a lead of over 30 seconds over Jochen Rindt's Cooper, and cruised to his first win of the season, albeit a fortuitous one, and the first for the H16 BRM engine. Tony Rudd's H16 engine was gorgeous looking and sounding but ultimately an unsuccessful challenger for the new 3-litre Formula 1 era. As a very big and heavy white elephant, It eventually faded into oblivion.

"I have no fond memories of the whole H16 dilemma," remembers its leading driver Jackie Stewart. "Tony wanted to prove the concept was right and Tony was a good man but it was very clear it wouldn't work, and that's in the end why I left BRM. The H16 would have been better used as a ship's anchor than as a power plant."