In part five of our regular series, Eric Silbermann visits the Force India factory at Silverstone to find out how long it takes the car build to be completed ahead of the first test 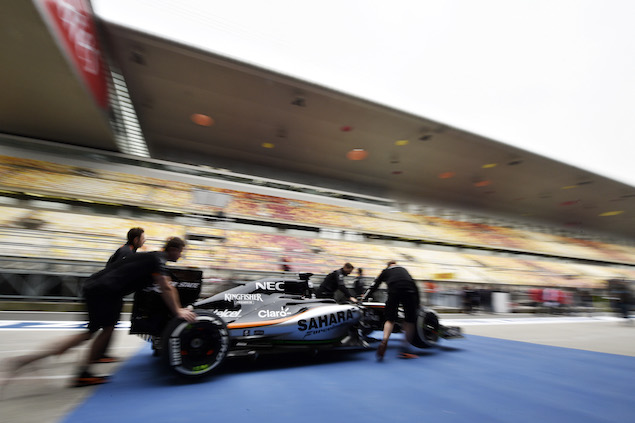 You know the feeling, you’ve got to the pub early and nearly broken your nose when the door didn’t swing inwards because it’s not open yet. You’re impatient, you look at the time and you listen to your watch to make sure it’s still ticking. When I was up at the Force India factory a week or so ago, that was very much the situation for the team’s Operations Manager, Mark Gray and his crew, poised and ready to start building the first car of 2016.

“We’re waiting for the parts to materialise so that we can actually do something with them,” says Gray, who has been working here since the Jordan name hung over the front door. “I started out as a road car mechanic many moons ago and was a weekend warrior with teams in the smaller formulas and I just worked up from there really, including British F3 and sports car stuff, then there was an opening here in 2001 or 2002 as a mechanic on the test team.”

If you’ve ever met an F1 designer, you will know they inhabit their own fluffy little universe where the car just builds itself and if the process does require a helping hand, then it comes from a hand with fingers as long as ET’s fitted with a wrist that can swivel through 360 degrees. To avoid problems with unbuildable cars, the Force India mechanics are heavily involved with the drawing office and other departments as the new car is designed. 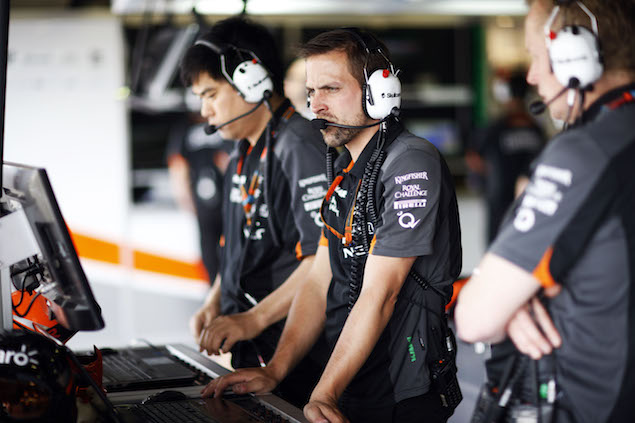 “We feel it’s very good for the mechanics to have an input,” explains Gray. “Hopefully, it makes their lives a bit easier because at the end of the day, they’re the ones working on it. Equally, it’s very good for the guys in the drawing office to have feedback from the guys that are taking the car apart and using the bits that they’ve drawn, so it’s a great interaction. We’ve got a good bond between the two departments and it works well. We haven’t got big funds where we can make lots of parts and hope that they work. We need to get it right first time and I feel this process does assist with that.”

At times, the engineers win, so the mechanics have to make special tools to work on a particular component.

“They’ll see something and say, ‘We won’t be able to get on that.’ It might not necessarily be easy to change and there’s a reason for it, maybe from a strength or performance point of view and that takes precedence over ease of working but the mechanics can have ideas of what sort of tool could get on it and whether that’s something we need to purchase or we need to make. That way when you turn up at the first test, there should be no surprises, you know what does what and how things go together and what tools you need. We’re using this time now to do things like that.” 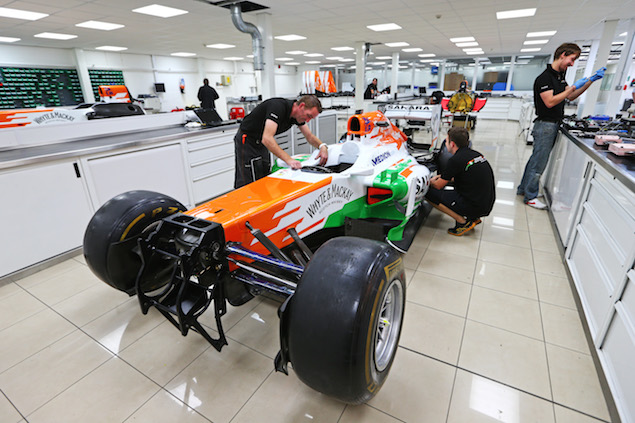 The conventional view of the modern F1 mechanic is of someone who doesn’t even get his hands dirty, simply fitting pre-assembled component groups onto the car and there’s an element of truth to that, given how complex the cars are and how little time there is to do anything over a race weekend.

“Some say that you don’t need to be as qualified to bolt a car together now because everything’s done for you but I disagree,” affirms Gray. “The job’s changed completely from how it used to be, especially over the last six or seven years, and looking ahead to next season, 2017, I think it’s going to change again so it’s going to be another new challenge for everybody.

“The cars are more complex to work on. There’s a lot more stuff on them that you need to deal with from electronics, hydraulics to physical parts. The space that the parts fit in is smaller and the parts themselves are smaller. There are new materials now that we’re using, that makes things smaller, lighter and harder to fit or harder to use, but it’s all in the name of performance so we have to develop with that. So you rely more on your factory staff to be able to do some of those jobs. 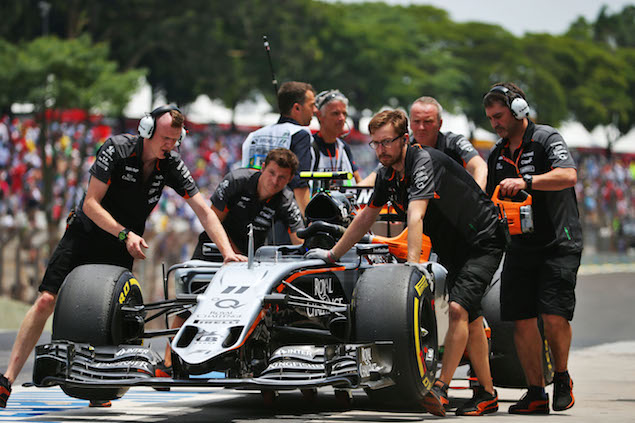 “A lot of the mechanics and our garage operatives have specialised skills in other departments. Some are very good at welding, some are good at electronics and electrical and when they’re working on the car, they don’t really get the chance to practise those skills, so we can ensure they get to use those skills and to keep that knowledge going. Obviously, from a trackside point of view, especially at testing - if, for whatever reason, you need somebody to do something like that, you know you can call on them, so it’s in everybody’s best interests to muck in and get the jobs done.”

While everyone knows teams practice their pit stops incessantly over the winter, were you aware they also practice dismantling and assembling the new car?

“As we’re building the new car, we’re testing stuff, we’re assembling it, taking it apart, assembling it again, checking as we go,” reveals Gray. “It’s not a simple build and send it to the track. We see if we can create problems by assembling it, disassembling it and seeing what might happen, as well as working on more technical aspects, such as bleeding procedures for the hydraulics, for brake systems, even for electronics. You try and operate the systems off the car on a rig or on the bench before you actually put it on the car and hopefully, by the time it actually goes on the car, you’ve ironed out all the problems and it’s a straightforward fire up and away you go.” 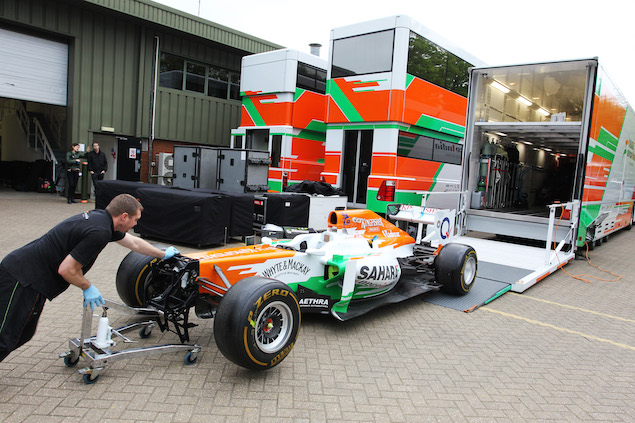 Parkinson’s Law, the old adage that work expands to fill the time available, could have been written to describe the way a Formula 1 team operates. Mark’s answer to my enquiry as to how long before leaving for the first pre-season test would the first car be actually sitting on its wheels on the workshop floor, was short and to the point:

“You’re probably down to hours,” he said. “I think 24 hours before the car leaves, it will look like a car. It’s the same for the races when the cars leave the UK. The only time the car looks like a car is the few seconds before it’s pushed into the truck when the bodywork is on and the wings and things are on so there’s always still a huge amount of work to do when we get to the track.”

Let’s not forget one particularly important component, the one car designers refer to as a gearbox-spacer, namely the power unit. In the case of Force India, that means Mercedes and their technicians will be on hand for the first engine fire-up in the factory. 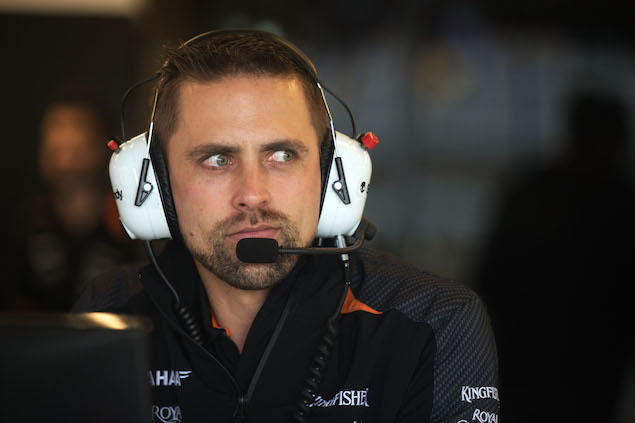 “We do all our full systems checks here so hopefully at the track it’s fairly straightforward,” says Gray. “We’ve got a team of engine guys that work with us throughout the year. They’re obviously employed by Mercedes but they work for us and they’re basically at our beck and call. They travel with us as well and they spend all the time at the track with us as part of our team.”

With the first Barcelona test starting on Monday 22nd February, Mark and his crew hope to take delivery of the first chassis one week before, working to a Thursday evening to have packed onto the truck and ready to head for Spain.

“So we’re looking at a four day period to assemble the first car. Once we get used to the car in-season, it’s pretty much two days to strip and rebuild it completely, obviously barring any issues because that can take a lot of time. We normally allow around two to three days for a build.” 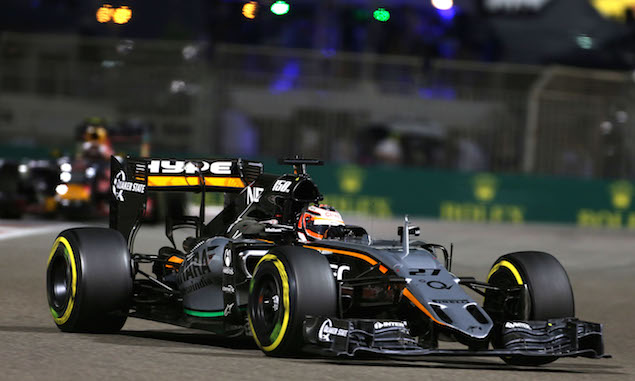 It all sounds perfectly mapped out and very calm and next week we hear from the man who has to convince the media and the wider world that everything is always going to plan, Force India’s media head, Will Hings.

Christian Horner – Race of my life