In part seven of our regular series, Eric Silbermann visits the Force India factory to see the final preparations with the drivers before the team heads to testing 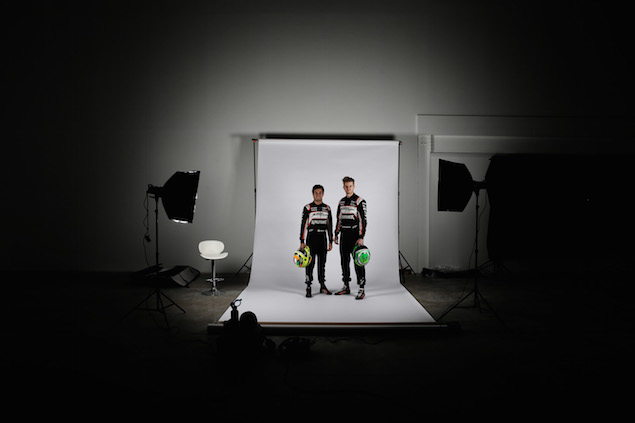 Here I am again at the Sahara Force India factory. See how much of a regular I’ve become over the winter? I even used the “Sahara” word in the team’s name, something that’s never been done by a journalist since the day the team name was announced. I have my own coffee mug and the receptionist knows my name.

But there’s still the problem with the Guest Parking. No no, there are plenty of spaces, but instead of being the front-in back-out sort of thing, they involve parallel parking. And unlike a regular road, there is no street furniture to clue you in as to where are the dividing marks on the tarmac. My car even has one of those systems that does the parallel parking for you while your hands are free to do whatever hands do while a car parks itself. Except that I’ve never read the handbook and haven’t got a clue how to operate it. Handbooks don’t do it for me. It’s the same reason why on my other car, an Audi I’ve owned for two years, I can’t operate the built-in Sat-Nav and wherever I go, I have to sucker my trusty motorcycle Sat-Nav to the windscreen. Being waterproof, it’s handy in the event of an emergency stop showering it with coffee or fizzy pop.

So there I am, faced with the embarrassment of getting out to check the lines front and back, shuffle the car forward or back a few inches and try again. I now know I can be seen through the tinted windows, because the time I turned up on my easy-to-park motorbike, the boss Otmar Szafnauer himself opened his office window and shouted out to talk to me about it, so I am painfully aware that the whole factory is probably laughing as they watch a Formula 1 journalist unable to park a reasonably-priced Estate car. 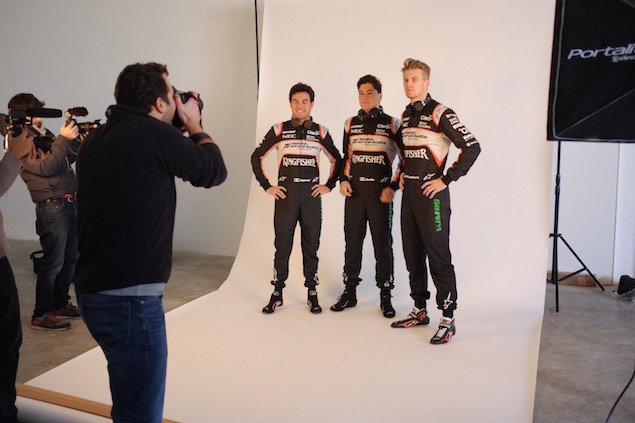 This is my last visit of the winter, coming as it does a few days before everyone flies off to Barcelona for testing. I head over to the building that is serving as a studio for the day, because I’m here as a fly on-the-wall to watch a driver photo shoot, featuring Nico Hulkenberg, Sergio Perez and his fellow countryman and brand spanking new third driver Alfonso Celis. It might well be the middle of winter in the UK, but I am by no means the only fly that’s hatched early and is buzzing around today. I’m watching various Hispanic TV station film crews and a man from FOM all busy filming a photographer take photos of the drivers and we’re all watching one another watching….

Before the photos are shot, a replica F1 car is wheeled into the building, pushed by a couple of Force India staff. There are plenty of other people in attendance but I watch, as they watch the two people huff and puff on their own to push the car past some workers who are digging up the road. I am also watching the road diggers watch the camera crews watching the people pushing the car.

So we’re ready and bang on time, Nico Hulkenberg walks in to be shot. He looks whippet-thin and fit as a butcher’s dog; a butcher’s Whippet if you will. He’s cold and, inevitably, the warehouse heater isn’t working because it’s run out of diesel. At this point, I choose to break the fourth wall and take an active part in proceedings. I fix the problem by moving the no-heater outside and closing the door. I look round for admiring glances and a round of applause, but none is forthcoming so I grab a quick word with the photographer. James Moy clearly puts all his creative talent into his work, but not naming his company, as it goes by the snappy moniker of James Moy Photography Ltd. 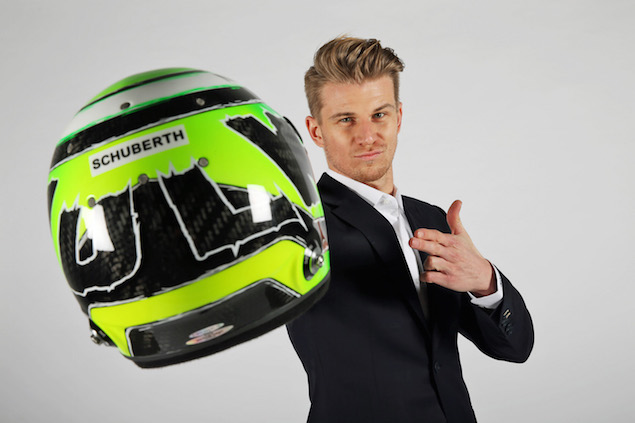 “The photography is very similar every year in that we’re trying to get a stock of images that can be used by the team, its sponsors and the media for the coming season,” explains James, while expertly fiddling with spotlights and other photographic appurtenances. “The planning of the shoot is straightforward enough even if it involves lots of lights and equipment. The management of the drivers is a bit more complicated, as is remembering which sponsor needs a particular bit of product placement.

“It’s not a tricky photo shoot. The job list gets longer, even as the day goes on – you come thinking you’re doing some photos of drivers and pretty soon, you’re photographing, headphones, cans, bottles and suits.”

The aforementioned suits come courtesy of Apsley Tailors, bespoke tailor to the team. As the new boy, Celis has to be measured up for his. Asked by the tailor if he’s had a bespoke suit before, Alfonso, or “The Fonz” as he is known, answers in the affirmative, with a look that implies he would never dream of going off-the-peg. Did I mention he is clearly more loaded than a pump action shotgun? Don’t believe me? Well, what else does it take to jump the queue ahead of the race drivers and give the new car its Barcelona shakedown on Monday? 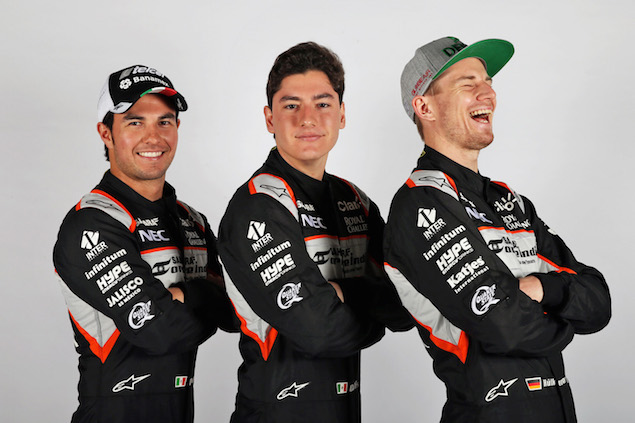 Back to Mr. Moy: “Everything we shoot today will go out on Monday (first day of testing) at the launch of the car and the speed with which images now go round the world, its incredible. When we used to do it on film, we’d shoot it, go back home, process it, send it to Japan for example and about two weeks later you’d see it published in a magazine over there.

“Now, I guarantee that at five minutes past nine on Monday morning, my phone will ring with someone saying ‘I need a photo.’ But we can do that now, sending photos from trackside with wireless transmitters. The demand for speed is such that, I hate to say it, but speed of delivery is almost more important than the quality of the image. That’s not the way I want to see it go.”

By now, Perez has turned up for his modelling assignment and straight away the mood changes. Not in a bad way, but Latin drivers always seem to need a few of their people in attendance, they have that one last phone call to make and there’s a bit more of a hubbub around them. However, Sergio shows no Naomi Campbellisms when it comes to the posing, doing everything with a cheery smile and a willing disposition. 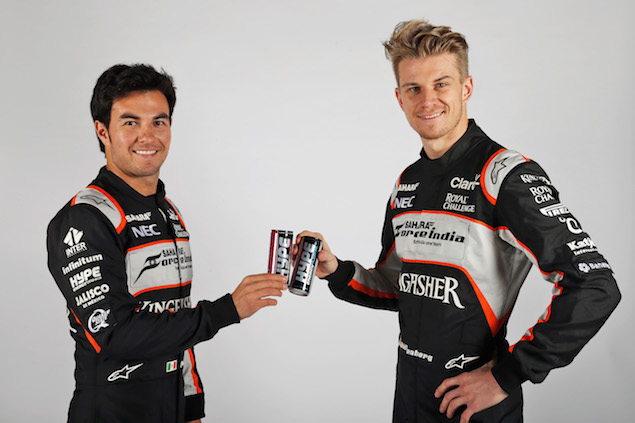 “These two drivers are fine, they both understand it, they understand the need to do it and we fire through it fairly quickly. They’re both very relaxed, they pose well, they are comfortable in front of the camera, they both smile well, they look professional. They try and push it a bit and try to speed you up, but they are very good. I have worked with others not quite as good but I’m not naming them…”

The shoot has gathered its own momentum now, although it’s steered in the right direction by Sahara Force India Partner Manager, Victoria Helyar, pronounced “Hell Yeah!” which is appropriate enough, as it tends to be the reaction of most red-blooded young males when they meet her.

What does a Partner Manager do? In this particular context she shows amazing skills including the ability to carry three crash helmets, four cans of Hype, a box of Skullcandy headphones and a clipboard. She clearly has Driver Whispering skills too, because after giving them each a pair of headphones to play with she instructs them to “look as though you are having social fun.” Social fun? Who knows? But Sergio and Nico duly lark about, clearly getting the message perfectly, while Moy snaps away. 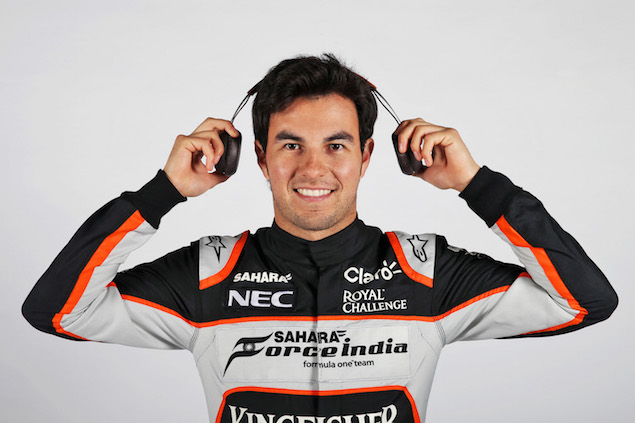 It’s time for a buffet lunch in the boardroom and then a host of TV interviews for our trio of drivers. That’s my cue to leave at the end of an enjoyable winter following Sahara Force India’s preparations for the coming season. I’d happily come back next year, but maybe I need to brush up on my parallel parking skills first.

A closer look at the Renault R.S.16

Eric Silbermann: Someone call for a doctor