F1i technical expert Nicolas Carpentiers provides you with some exclusive images and explanations of the main technical upgrades spotted at the Bahrain Grand Prix in Sakhir. 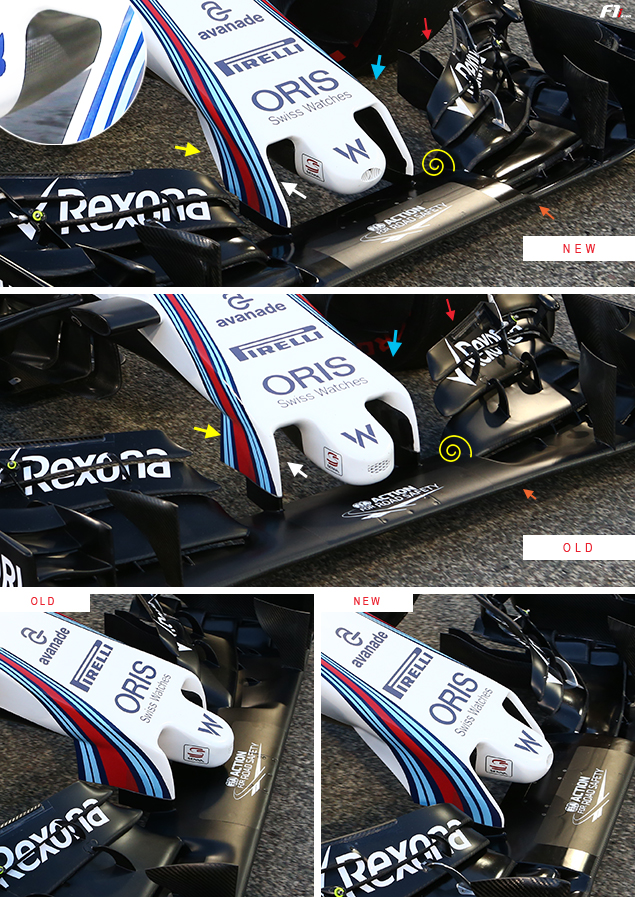 BEING NOSEY AT WILLIAMS

It was pretty touch-and-go but Williams eventually managed to ship its new nosecone to Bahrain International Circuit and have it fitted on Felipe Massa’s FW38 (the Brazilian was granted priority over team-mate Valtteri Bottas based on current championship positions). Featuring revised mounting pillars that have been elongated in order to improve the airflow under nose, the updated Williams design is narrower and 5cm shorter than its predecessor (use the “FIA Action for Road Safety” mention as a visual reference to compare both setups). The thumb-tip is also slightly more compact with a W-shaped hole used for driver aeration at its very end.

The overall aim of the new Williams nosecone, which bears similarities with the Ferrari and McLaren concepts, is to better channel the airflow with a wider opening. This has been achieved with the nose being shortened and raised while the thumb-tip ensures the design meets the technical regulations.

The new nosecone comes with a radically revised front wing. As is already the case on the McLaren, Red Bull, and Mercedes, the main plane splits into two elements on each side of the wing’s 500mm neutral section (see orange arrows). As a reminder, the Y250 vortex (see blue arrows) is generated in the area where the mandated neutral section and plane meet. In other words, the all-important vortex is created 250mm away from the car’s centreline, hence its appellation.