Catch up with what all the teams had to say following Sunday's Russian Grand Prix - the fourth race of the season. 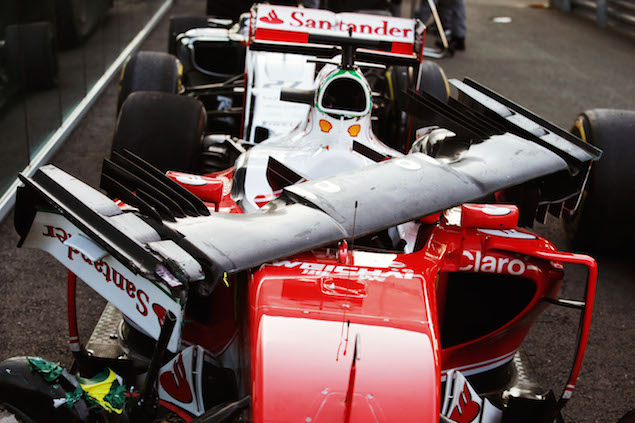 Sebastian Vettel
“I think it’s a shame because today we had done everything right. I had a really good start, I was a bit stuck at the first turn, but then I was able to go. Of course there’s always a bit more risk in starting behind, but P7 is not P15. I was going into second corner, I was already attacking and approaching fifth place, but it doesn’t help when people behind don’t brake. What Kvyat did was completely unnecessary. I had a massive hit from behind, then another big hit in turn 3 and that finished my race. As far as I know, the race is 53 laps, but not everybody seems to remember. I don’t think I need to say much, I think if you look at the footage you’ll have the answers to your questions. Today it was not my fault, there was nothing I could have done differently, nothing I would change. I don’t dislike him (Kvyat), but I think he did a mistake two weeks ago, he made a mistake today but it doesn’t help me now. Obviously I would have loved to drive the car today to feel if we could keep the same balance into the race, but for the future nothing has changed. Of course I’m disappointed but we’re already focused on the next race.”

Kimi Raikkonen
“Overall it hasn’t been a very easy weekend, but today we tried to make the best out of it. I had a good start and managed to get second position but then, like last year, after the Safety Car I could not hold up the Williams behind me on the straight. After that I was trying to fight them back, but I lost one place to Hamilton. So we decided to run longer to gain positions and we did quite a pretty good job. The car was handling very well through the whole race, even if we were forced to do some fuel saving and this affected our laptimes. The third place we managed today is what we were able to achieve, but is not ideal, because we want to be at the front with both cars. It’s a pity not to be fighting for the win, but we take this result and keep on working to put ourselves in a better position.”