F1i looks back at the 1994 Spanish Grand Prix in which Michael Schumacher pulled off the stunning feat of racing his Benetton to second place despite a severe gearbox failure. 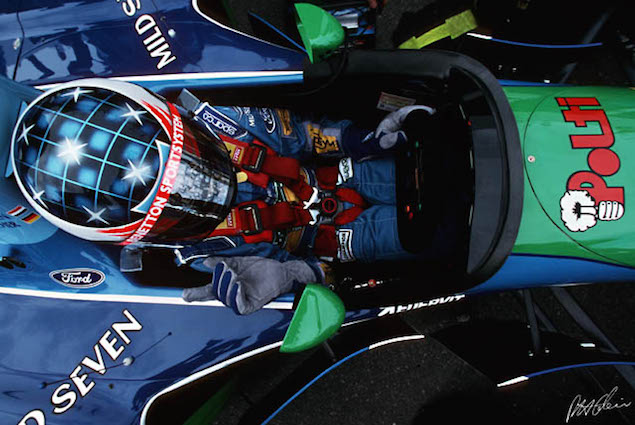 By any measure, the 1994 Grand Prix season was as dramatic as it was consequential for Formula 1. A massive turning point for the sport, the turbulent year endured a 'weekend in hell' when the lives of Ayrton Senna and Roland Ratzenberger were lost at Imola. Two weeks later, Karl Wendlinger slammed sideways into the barriers at Monaco, sending the Sauber driver into a coma from which he would emerge weeks later. FIA President Max Mosley demanded drastic changes on the safety front to slow cars down, initiating for starters a full-blown sterilisation process of many race tracks, cutting lap times by installing makeshift chicanes wherever possible.

The season was also littered with controversy, much of it involving Michael Schumacher and a Benetton team suspected of operating beyond the fringe of legality by exploiting an illegal traction control system hidden in the car's electronics. Incapable of proving the roguery, the FIA applied a zero tolerance policy towards Benetton, belatedly disqualifying Schumacher at Silverstone for ignoring a black flag that he was given after passing Damon Hill on the formation lap. Another disqualification, and two-race ban, hit the German in Belgium, where excessive wear of the Benetton's under-body plank only reinforced the dirt and gossip surrounding the Flavio Briatore managed outfit.

But nevertheless, there were some hard-fought battles and superb races as Damon Hill, who wonderfully took up Williams' cause after Senna's death, progressively closed in on his Benetton rival, beating him in a straight fight in the pouring Suzuka rain. Unfortunately, it would all end in acrimony in Adelaide but that's a tale for another day. 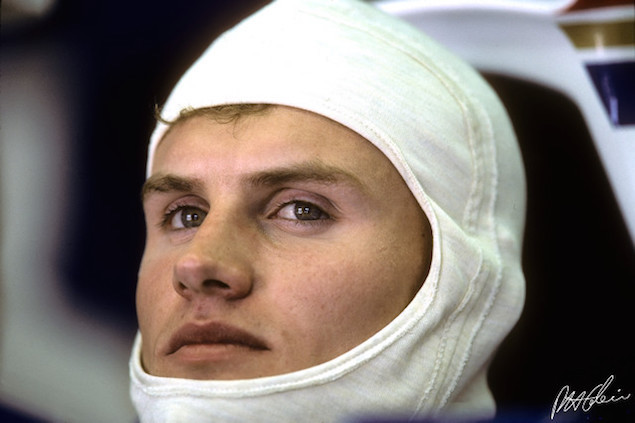 Damon Hill's title challenge in 1994 began in earnest in Barcelona. The new leader of a still grieving Williams squad was joined at the Spanish Grand Prix for his F1 debut by test driver David Coulthard. The Circuit de Catalunya was the first 'victim' of President Mosley's safety cleanup when a temporary chicane was installed before the fast Caixa corner to cut speeds. Actually, it had been the newly-formed, or rather reformed, Grand Prix Drivers’ Association which had instigated the decision to set up the ridiculous tyre-wall lined artefact.

Schumacher placed his Benetton on pole by over half a second over Hill, McLaren's Mika Hakkinen lining up third on the grid while rookie Coulthard qualified a respectable ninth. At the start, the Benetton led the field away, quickly generating for itself a comfortable lead, leaving Hill and Hakkinen to fight over a distant second place. Coulthard, who had moved up to an impressive fifth unfortunately disappeared after 15 laps with electrical problems.

In the midst of the first round of pit stops, Schumacher’s Benetton developed a gear-selection problem which progressively stripped its transmission of all gears but fifth. Somehow, Schumacher succeeded to pit and rejoin in the lead without stalling. For the following 20 laps, a three-way rotation up front ensued between Hakkinen, Hill and Schumacher as pit stop strategies unfolded. 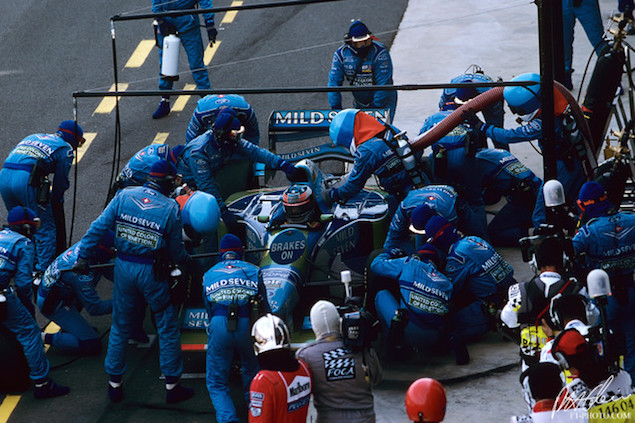 Despite the near-impossibility of driving the remainder of the race in fifth gear, Schumacher was still setting more-than-respectable lap times, managing a second incredible visit to the pits without stalling or exploding the Benetton's overworked clutch. The German simply worked miracles with his crippled gearbox, taking full advantage of the Zetec-R engine's wide torque band, modifying his line through the corners, backing off on the straight, not only keeping the car going throughout the circuit, but actually posting lap times competitive with his rivals.

With 20 laps to go, Hakkinen's Peugeot engine expired, delivering to both Hill and Schumacher comfortable first and second positions. In the end, Williams secured its first victory since Monza the year before, Hill dedicating his win to his team and to all those who had been through terrible times with the loss of the great Ayrton Senna.

At the post-race press conference Hill, who was under the impression that he had beaten his opponent fair and square, gazed over at Schumacher with incredulity as the German explained his tormented race.

"At the beginning it was a bit difficult to take all the corners in 5th gear, but then I managed to find a good line and keep up lap times that were more or less good enough to compete against the others behind me." 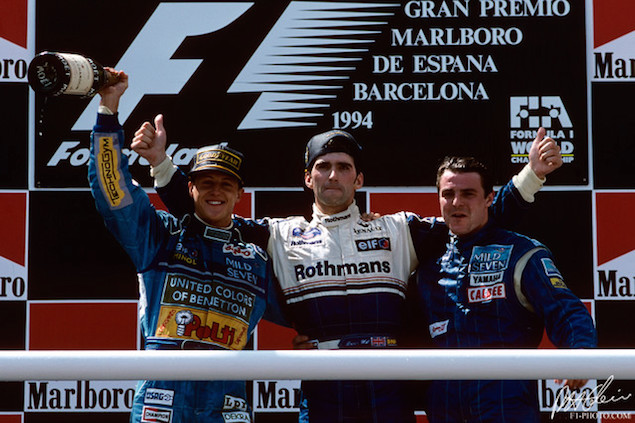