FORCE INDIA IN THE ORBIT OF THE THREE-POINTED STAR

With little change brought to the technical regulations since 2014, it’s hardly surprising to see teams converging on the same solutions.

Introduced by Mercedes at the 2015 Chinese Grand Prix, the design above was subsequently adopted by Ferrari and Williams. It compartmentalises more clearly the two functions of the front wing: the blue-coloured inner section creates downforce, and the yellow-coloured arches help divert the dirty wake coming off the rotating front wheels.

On the Brackley-designed layout, the outer section comprises a series of arches of increasing size, which form a sort of reverted funnel that widens right ahead of the front tyre. The new VJM09 front wing introduced in Spain clearly draws some inspiration from the Mercedes philosophy and breaks away from the previous installation, which shared similarities with the Red Bull solution as noticed by Autosport’s Craig Scarborough.

A FLURRY OF UPGRADES AT THE REAR TOO

Furthermore, the rear of the car has been radically revised. The engine cover is tighter (see white arrows), while the carbon vane at the end (in green) has been lowered. One of the suspension elements has been re-positioned (see yellow and orange arrows), and one can also notice that the brake ducts sport a new design (see the close-up). 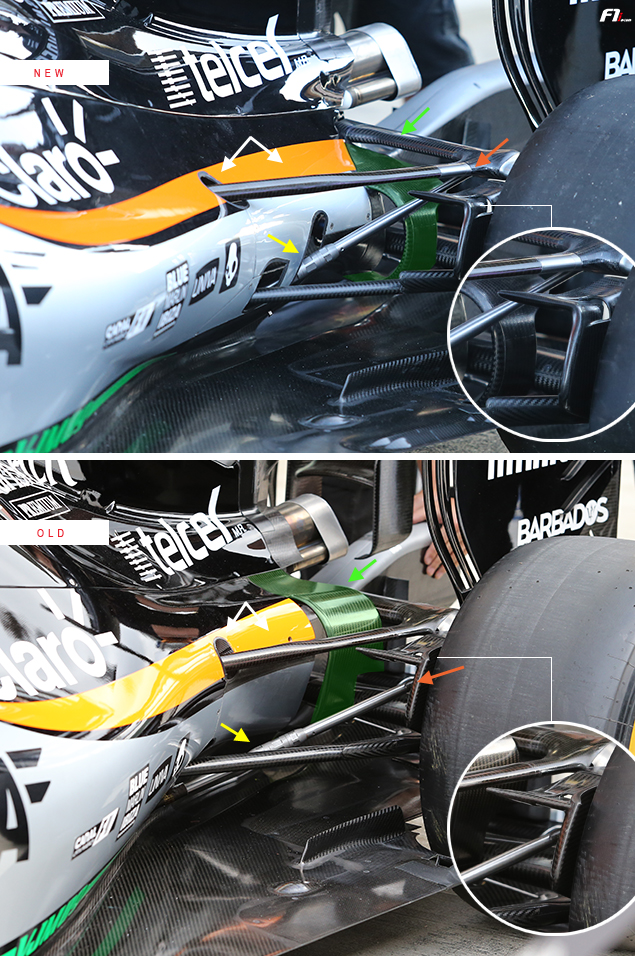