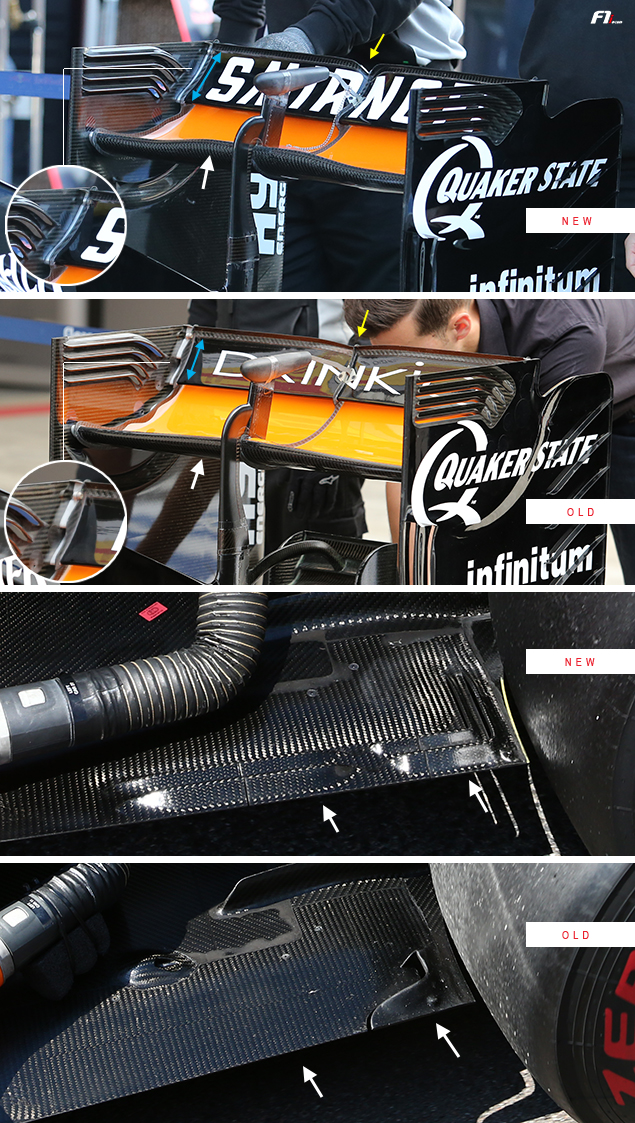 Like other teams (Ferrari, McLaren, and Renault among others), Force India mounted a high-downforce rear wing on the VJM09 for Barcelona. The upper flap had been increased (see blue arrows), while the leading edge of the main board is thicker in the middle (see white arrows). The aerofoils located between the flap and endplate have also been re-designed (compare the close-ups). Basically, these help maintain the upwash wake when the Drag Reduction System (DRS) is open, which makes it easier to reattach the airflow when the DRS closes.

Finally, new slots have been pierced into the floor, with the installation almost a copycat of the design McLaren introduced last year in Austria (before dropping it later on). This includes two longitudinal and parallel slits plus a couple of long, L-shaped, and still parallel, apertures closer to the wheels. The idea is to channel the high-pressure airflow coming from above the floor towards the zone located between the tyre and the diffuser. Thus, the Force India engineers aim to re-energise the air flowing along the diffuser’s edges and divert the air turbulence produced by the rotating rear wheels. As also noted by Craig Scarborough, this area is critical on the VJM09 because Force India runs a very high ‘rake’ angle on the car with the front end much lower than the back. By comparison, the VJM09’s rake angle is 1.9° (same as the McLaren and Red Bull) when it’s only 1° on the Mercedes.