Catch up with what all the teams had to say following the tenth race of the 2016 season - the British Grand Prix at Silverstone. 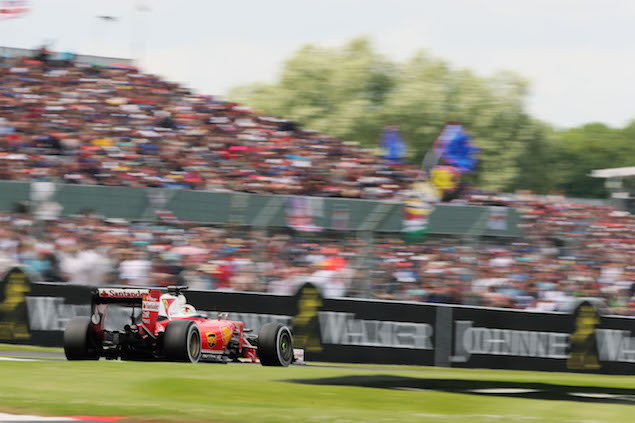 Sebastian Vettel
“Today it was a tough day, but we trust our team and trust our car, so there is no reason to panic and to turn the world upside down. The call to come into the pits was absolutely right, but then the spin didn't help, and all my advantage was gone again. The penalty in the end didn't make a difference, it was not on purpose that I was trying to squeeze Felipe. Actually I was going out myself, and I was surprised how little grip there was, going side by side with him. In the end it was a racing incident. Now we need to understand where we lost something. We have a lot of things to learn from a weekend like this. Clearly today we weren't as competitive as in other races, but at least we recovered some points. And this was the only race of the year where we weren't able to beat the Red Bulls in terms of race pace. Things may look different in two weeks' time, but that shouldn't be an excuse. We need to go forward and understand why we made a step back this time around.”

Kimi Raikkonen
“In the first part of the race the conditions were quite tricky, the visibility in some places was very poor and I had very low grip on the Wet tires, but I tried to go as fast as I could and I went wide a few times. Once we got the Medium tires the situation improved a little bit, but it was not easy. Since the beginning of the weekend we had realized that this would have been a difficult weekend. Today we tried to do our maximum but we had not enough speed to fight against the guys in front. In these kind of conditions we need more downforce and more grip, I'm sure in Hungary it will be much easier for us. Next races it will be a different story, I don't expect us to have similar issues, obviously you never know, but I expect that we go back to normal.”

Maurizio Arrivabene, team principal
“We knew, coming here, that it would not be an easy track for us-but if you want to be on top, there must be no 'difficult' ones. This is a circuit which, power unit aside, puts a premium on other factors which we were lacking here. It's not the first time it happens, but perhaps it was much more apparent this weekend. In these conditions, we opted for a very aggressive strategy, pitting in for Intermediates after the initial Safety Car stint. Unfortunately, this choice did not pay off because of the Virtual Safety Car which came out immediately afterwards. But to be honest, the best we could have done was to gain one position in the race. Our drivers did a solid job, despite being hampered and somewhat frustrated by the technical issues we are aware of. Now we must turn the page, look ahead to Hungary and capitalize on the hard lesson we learned here.”