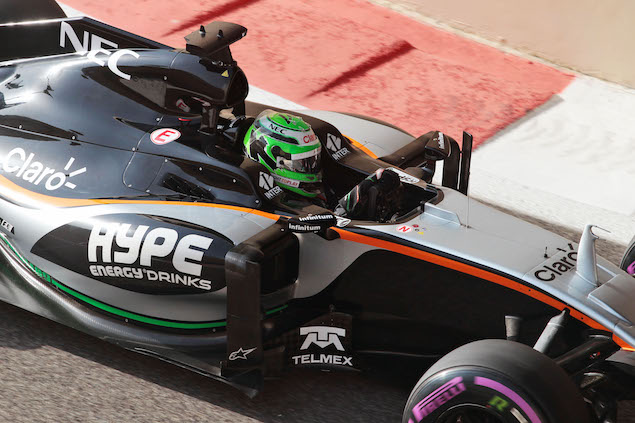 Nico Hulkenberg
“I’m very happy and I think seventh place was probably the maximum result for us today. I’m pleased with my laps, especially considering the lack of running I have had this weekend, sitting out FP1 and missing half of final practice. Going into qualifying I thought it was going to be quite difficult, but we made good progress with the car during the session and I had the confidence to really push on all of my laps. Hopefully we can deliver more of the same tomorrow to end the season and my time with Force India in style. The cars ahead in the top six may be just out of reach, but we will give it a go and see where we end up.”

Sergio Perez
“I am pleased with the result for the team, locking down the fourth row of the grid, but I am not very happy with my performance because I know I could have done better. I had a bit of understeer on my last lap so I tried to change my lines to counter it, but it didn’t really work. I could have been in P7 with a perfect lap, but with Nico just ahead it’s still a great result for the team. I am looking forward to our last race as teammates and beating the cars around us to finish the season on a high note. I want to outscore our rivals because finishing fourth in the championship is a really important objective for us.”

Robert Fernley, Deputy Team Principal
“To end the final qualifying session of the year with both cars inside the top eight is an excellent effort by the entire team. The car has been competitive in all the sessions, but it’s been a challenging day with Nico losing quite a lot of track time in final practice. Despite this, he was able to secure seventh place on the grid. Sergio was matching him lap for lap and ended the session just one hundredth shy to lock out the fourth row of the grid. Looking ahead to the race, we’re well placed to bring home a strong result to sign off what has been the most successful season in the team’s history.”