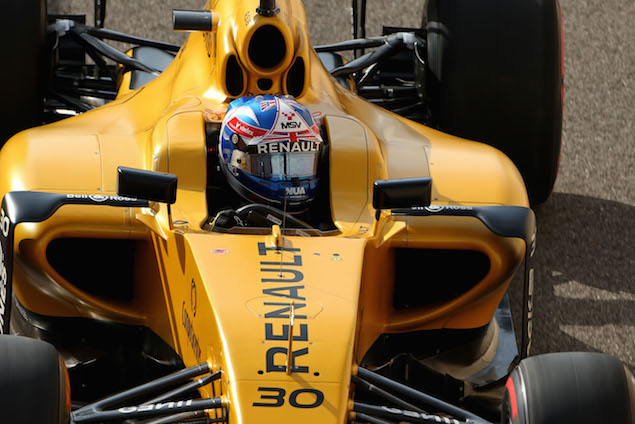 Kevin Magnussen
“We’ve been lacking pace so far here in Abu Dhabi and that was the same for qualifying today; it just hasn’t been my weekend. We had three runs planned but I was called into the weighbridge so that didn’t help. Hopefully we can have a good race, as a lot more can happen and we’ll be looking for every opportunity to fight our way forward”

Jolyon Palmer
“I’m really happy with how we’ve been going; I’ve been in Q2 at every race I’ve qualified for after the Malaysia GP now so it’s been a strong run for us including today. Yas Marina isn’t the easiest of tracks for us but I did a really good lap in Q1 and managed to beat Wehrlein in Q2, so fifteenth is probably as good as it can get. I think our race pace is a bit stronger, so we should be able to move forward. If something kicks off at the start and we make up some places then we have the pace to stay up there.”

Alan Permane, Trackside Operations Director
“Today was a similar story to what we’ve seen at a number of recent races; we didn’t quite get the optimum out of the car however this didn’t impact greatly on our grid position. Jolyon made a small mistake on his second Q2 run, however a perfect lap would only have put him nearer to the car ahead, not in front of it. Kevin struggled to unlock the pace when needed and grappled with some front wheel lock-ups on his second Q1 run so missed out on Q2.

“The data points to a two-stop strategy as the norm with the majority of racing taking place on Pirelli’s soft compound. There’s still a bit of movement around those two aspects and we have seen in the past that track position can be important here as the car in front can be difficult to pass.”