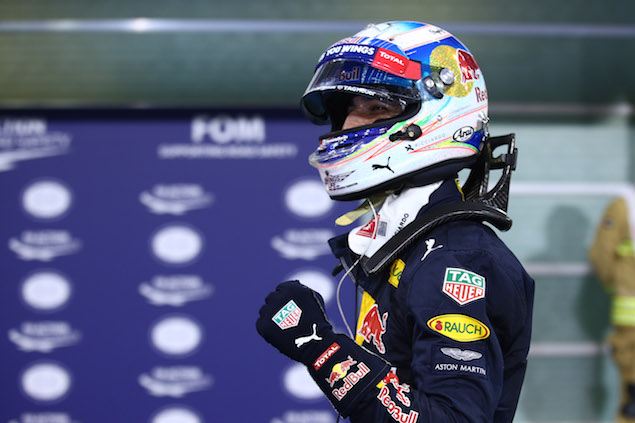 Daniel Ricciardo
“I’m definitely pleased I got the third place I was after. It feels really good. This morning was hard, I did a run quite early and I was nearly a second off Max so it didn’t look good on paper but the track warmed up so much that we didn’t really know what to expect coming into quali. Q1 was a little bit slow but then I picked it up and Q3 was solid enough so I was happy. We’ll see about the strategy. It’s just nice to do something different to Mercedes. We know on the same equipment they’re probably going to be quicker so we feel it should make us go a little bit longer at the start and then perhaps we can bring the race back to us towards the end when our tyres might be a bit different. For tomorrow of course I wish I was in their position, obviously they’ve both got a little bit more pressure than us this weekend, which I’m kind of envious about. But if the win is there for me tomorrow then I’ll go for it and there will be no holding back. You always have this level of respect as they’re fighting for the title, but if they leave the door open and I think I can pass, then I won’t make it easy for them and let them sail into the sunset.”

Max Verstappen
“I’m pretty disappointed with sixth today. Qualifying up until Q3 went very well, we had no issues and didn’t touch the car. In my last run I was pushing hard and a few tenths up but I locked up into turn 11, if not for that I feel I would have been around P3. It was a bit unfortunate as my pace was there and the car felt good. It would have been great to be a bit higher on the grid as the tyre strategy means that by starting on the supersoft we need a really strong start and to be careful with the cars behind. We should be able to stay out a bit longer, the tyre seems to work well in the higher temperatures so this suits the start of the race. The pace has been there all weekend so I am definitely aiming to go forward tomorrow and work my way to the guys up front. I will put today behind me and focus on having a strong race and closing the season with another successful result.”

Christian Horner, team principal
“A great final lap by Daniel to find that half a tenth to move himself ahead of Kimi to get the best seat for tomorrow’s start. It was a shame for Max because he was up on his lap but when he arrived at turn 11 he just lost the front axle and therefore the time that he had found was gone. Nonetheless starting third and sixth on the grid here for what’s bound to be an exciting start tomorrow is not a bad place to be. Strategically we’ve chosen to start on the supersoft tyre believing it to be a little bit more robust than the ultrasoft which again brings another dimension to the race. Hopefully if we can get a good start then we should be in good shape with those tyres.”