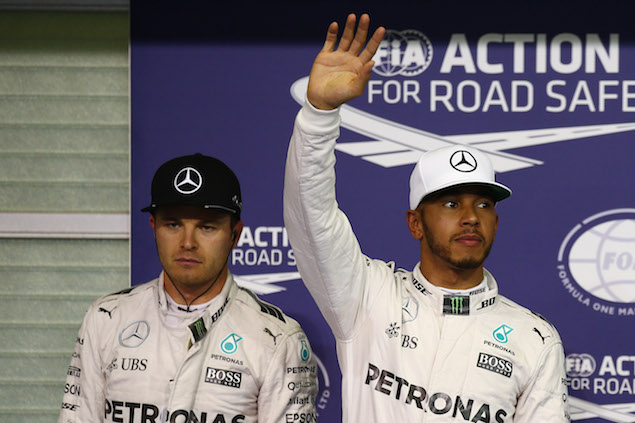 Lewis Hamilton
“It's been an awesome weekend so far. It's rare that you end almost every session on top, so I'm very, very happy, with that. It's down to the hard work done by the mechanics and the engineers to get the car where I need it, so I'm grateful to them for that, as always. I felt so great out there tonight. It's really sad that this is the last Qualifying session we're going to do in this car! It's a dream for any driver to have something this good to drive. I've been doing my practice starts from the pole slot all weekend as I wasn't planning on being anywhere else for tomorrow. I came here knowing that was a big part of what I needed this weekend and, now I've got that, I can focus on the race. Getting away in front will be the next important step. You need a big pace delta to overtake here, so the start will be crucial. Tonight, though, I need to look at strategy and how things need to work for me to get the win. At the moment, my pace is that little bit better. But I can't control what happens behind me. All I can do is focus on my own race. You never know what might get thrown into the mix, so I'm just hoping my car is as beautiful as it has been so far this weekend and aiming for the win.”

Nico Rosberg
“I came here to be on pole, so I'm not ecstatic today. I was feeling good in the car today and put in some good laps at the end. But Lewis did a great job and was just a few tenths quicker. I'm still in a good position to win the race and I want to end the season on a high. There are a few opportunities tomorrow, so I look forward to an exciting battle. The Yas Marina Circuit is a great track and I'm feeling very good before the last race of the year. I am proud and happy about how this season has gone for me until now. Tonight I will relax a bit with Vivian and some friends and come back tomorrow in top shape.”

Toto Wolff, head of Mercedes-Benz motorsport
“No matter what it looks like from the outside, a 1-2 lockout in qualifying is never easy to achieve. So it's a great result for the team to see this car take the front row in its final ever race weekend before it heads to the museum. It was also a great driving demonstration from our boys this evening. Lewis was on his own level all the way through, setting the benchmark in Q1 and never headed after that. As for Nico, he did exactly what he needed to do tonight, and could perhaps have been a little bit closer without a couple of errors on his lap. But it sets up the perfect scenario for tomorrow's race - and we have Red Bull running the alternative tyre strategy, too, which could add a little bit of spice to the race. They will be looking to put us under pressure with that move and we'll see how things play out. As for us, we will be going racing just the same way as we have done all year. The boys are free to race, like they always have been, and we will stay true to our values and principles that have served us so well in the past three seasons. It's going to be a thrilling showdown to a fantastic season.”

Paddy Lowe, executive director (technical)
“A terrifically exciting session! We're very conscious that the whole world is watching the duel between Nico and Lewis and we are delighted to have given them both the platform they needed to put on a great spectacle this evening. Qualifying is hugely important at this circuit and, for the race tomorrow, it could even make the difference between winning a Championship and just missing out. Fortunately, from a team perspective, everything went according to plan, with both drivers able to complete their laps without any issues. We saw incredible pace from both of them at the end to secure a front row lockout. Round one of the battle this weekend has gone to Lewis, so congratulations to him for putting his car in the best possible position with an extraordinary lap. He didn't put a foot wrong all evening. For Nico, Q1 didn't go according to plan - but he pulled it back and was right on the pace when it mattered. We look forward to seeing how their battle unfolds tomorrow. Of course, this was the final Qualifying session of the year, so we must be extremely proud to come away with such a result. Qualifying is the ultimate measure of the pace of a car, so congratulations to the team at Brackley, Brixworth and Stuttgart for ending the season with such a large performance margin to the rest of the field.”