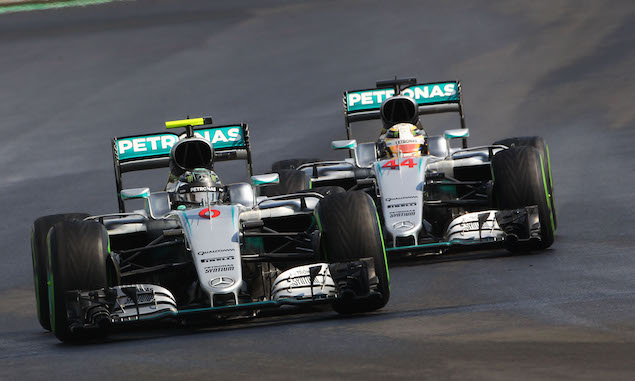 Mercedes had the most dominant car once again, for which it rarely receives enough praise, but 2016 was a far from flawless year for the champions.

Reliability proved to be the Achilles Heel for Mercedes this season, especially so when it comes to Hamilton’s car. The defending champion was hit by MGU-H problems in two of the first four qualifying sessions, with China seeing him start from the back of the grid and only finish seventh. However, the car was still good enough to ensure he rose from tenth to second in Russia as Rosberg won the first four races in a row.

An unhappy Hamilton’s mood was worsened after the two Mercedes drivers collided at the start of the Spanish Grand Prix, a moment the Briton described as his low point of the year. Fortunately, he won next time out in Monaco as Rosberg moved aside when struggling early on and then Red Bull handed Mercedes victory with a pit stop error.

The relationship between the drivers became even more difficult to handle after further contact at the start in Canada and then on the last lap in Austria, where Rosberg lost the lead to his team-mate. The German was not without his own reliability concerns at times, while starts also proved problematic for both drivers - more so Hamilton - and the end result was just four one-two finishes from the opening 17 races.

With Rosberg by then in position to win the title after Hamilton retired from the lead in Malaysia in the most high-profile failure of them all, the championship leader played it safe and finished second to his team-mate in the next three races to ensure a podium was all he needed in Abu Dhabi to win the title.

Rosberg duly did so despite Hamilton trying to back the sister Mercedes into the chasing pack in order to give himself a chance of defending his crown, but the team took exception and tried to use team orders to get the Briton to speed up. As the constructors’ was comfortably won long before, it was an error in judgement which definitely hurt the relationship with Hamilton, and leaves Mercedes having to rebuild some bridges over the winter as it also searches for a replacement for the retired Rosberg.