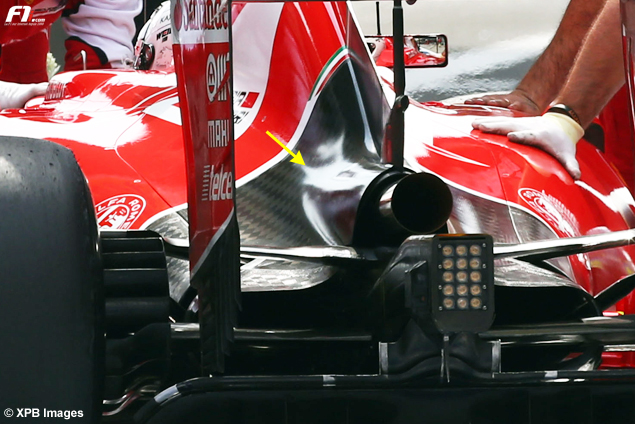 Although Ferrari was quantitatively less productive on the development front than Mercedes in China, the Maranello-based team did bring some updates in the form of lower and tighter bodywork at the rear. By reducing drag, the new design unlocked more straightline speed, always a key performance factor around Shanghai International Circuit.

Last Sunday, Sebastian Vettel (338.1kph) and Kimi Raikkonen (336.9kph) were extremely quick, and actually faster through the speed traps than the two Mercedes W06 Hybrids of Rosberg (331.4kph) and Lewis Hamilton (324.7kph). Fresher temperatures in Shanghai also led to the SFT15-T’s cooling gills being scaled down.

Ever since he joined Ferrari in mid-2013, James Allison has been changing the team’s overall approach to development. Instead of cramming as many parts as possible over a short period of time, regardless of whether or not these were actually efficient, the new technical director has been setting top priorities, targeting key areas, and brushing unrealistic deadlines aside.

“The pressure has been taken off people to deliver things for next week,” Allison told Autosport. “They can instead work with with a slightly longer timescale in mind, which frees up your hand to do a good job.

“It’s hard to do anything in a two to three-month timescale. You need to build a programme over months and years rather than weeks.” 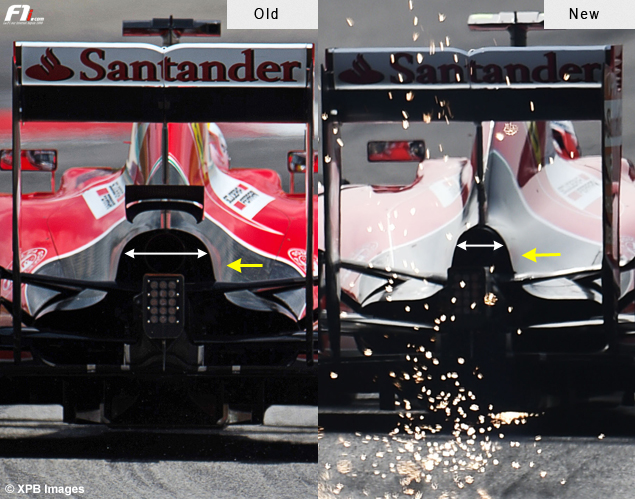 As witnessed over the first three races, the field’s best two cars rely on different strengths. Basically, the Mercedes W06 Hybrid is all about maximum downforce while the high-degradation Pirelli tyres somehow rein in its raw performance (a situation similar to Red Bull’s in 2012-13). On the other hand, the SF15-T is very gentle on its tyres, which to a certain extent puts Ferrari at a disadvantage in qualifying where bringing sufficient heat to the rubber is paramount.

The Mercedes/Ferrari showdown will thus unfold on track as well as on the development battleground. F1 teams’ aero departments usually reckon that one week of windtunnel and computational fluid dynamics (CFD) work results in 1% more downforce. Roughly speaking, a 3% increase equates to a lap time gain of one tenth. Therefore, it’s theoretically possible to go one tenth faster in three weeks, provided that right technical calls are made. If not, teams can end up tumbling down the pecking order pretty fast.

In the end, Formula One remains a constant quest for more performance, while also managing the risk of reaching dead-ends and going backwards. But catching Mercedes’ shooting stars definitely comes at this price.