Red Bull Racing's Daniel Ricciardo emerged as the victor in the 2017 Azerbaijan Grand Prix, which turned out to be one of the wildest, most incident-packed races of recent years.

Ricciardo had dropped to 16th place early in the race after being forced into an earlier than expected pit stop on lap 6. But with incidents taking place up and down the running order, a mature drive enabled him to work his way forward by keeping his nose clean to clinch his fifth career win.

An early accident saw Mercedes' Valtteri Bottas go a lap down at the start of the race. However, he was able to recover and narrowly take second place at the line from Williams rookie Lance Stroll.

Lewis Hamilton and Sebastian Vettel had been in charge of the first 32 laps of the race. A loose headrest then forced Hamilton into an unscheduled pit stop while Vettel was handed a ten-second stop-go penalty for intentionally driving into Hamilton behind a safety car. Vettel ultimately finished in fourth place, just ahead of Hamilton.

In a topsy-turvy result, Force India's Esteban Ocon picked up sixth place despite a costly clash with his team mate Sergio Perez that put the Mexican out of the race. Haas' Kevin Magnussen held on to seventh place ahead of Toro Rosso's Carlos Sainz. Fernando Alonso picked up McLaren's first two points of the season in ninth, with the final place in the top ten taken by Sauber's Pascal Wehrlein.

Bottas and Raikkonen tangle at the start

When the lights went out at the start, Hamilton got a solid launch from pole position. He quickly moved to shut the door on his team mate, which put Bottas into the clutches of Ferrari's Kimi Raikkonen. There was heavy contact between the two cars in turn 2 with Bottas going a lap down after being forced to pit for repairs.

Hamilton emerged with a clear lead, with Vettel promoted to second place ahead of a fast-starting Sergio Perez in the Force India. Max Verstappen was able to move up to fourth place ahead of Raikkonen despite hitting some bodywork debris during the second lap. Ricciardo also had problems with debris sending his brake temperatures soaring, forcing him to make an early pit stop on lap 6.

The first retirement of the race came on lap 8 when the perennially luckless Jolyon Palmer suffered an apparent engine failure on his Renault. Three laps further it was Kvyat's turn to have to park by the side of the track, and moments later Verstappen also suddenly lost power while vying with Perez for third place. Verstappen was able to limp back to the pits, but a safety car was scrambled to allow track workers to recover Kvyat's Toro Rosso.

Hamilton took the opportunity to pit for soft compound tyres, as did the majority of the field. The Briton resumed at the front with Vettel and Perez maintaining second and third. Raikkonen held on to fourth despite damage to the Ferrari, followed by Felipe Massa and Esteban Ocon. Williams kept Stroll out an extra lap to avoid stacking him behind Massa, and he came back out in seventh ahead of Renault's Nico Hulkenberg. Bottas was allowed to go past the safety car to make up his lost lap. Also benefiting from the caution was McLaren's Fernando Alonso who found himself in 11th place.

When the race resumed, Hamilton leapt away at the front while Vettel narrowly held off a challenge from Perez. Raikkonen was not so lucky, debris dropping off his damaged Ferrari as he was passed by both Massa and Ocon into turn 1. The debris forced race control to immediately redeploy the safety car while marshalls scrambled to clean up.

Race red-flagged after series of incidents

The next attempt to get the race back underway on lap 20 was even less successful. Hamilton slowed the field before the line, which caught out Vettel who ran into the back of the Mercedes. Furious at feeling he had been brake-tested, Vettel pulled alongside the race leader and deliberately banged wheels with a startled Hamilton. Even so, the restart went ahead and a rattled Vettel found himself under heavy attack from Massa.

Behind them, a charging Ocon ended up running his team mate Perez into the wall in turn 2. Ocon suffered a puncture and Perez was eventually out of the race with damaged front left suspension. To add to the drama, Raikkonen had cut his right-rear tyre on debris. The flailing rubber from the blow-out did massive damage to the Ferrari on its way back to the pits. In the end, the amount of debris left behind forced race control to throw a 22-minute red flag for a clean-up.

As the cars headed to the restart, Massa radioed that he thought there was a problem with the Williams. A rear damper failure was confirmed, and Massa haemorrhaged positions when the race went back to green. It allowed Daniel Ricciardo to pull off a brilliant move into turn 1 to pick up third place. Ricciardo was now ahead of Stroll, Magnussen and Alonso in sixth and the recovering trio of Sainz, Ocon and Bottas. Massa was soon obliged to retire, and Hulkenberg was also forced out after hitting the wall in turn 7 and wrecking his right front suspension.

The race was thrown into further turmoil when the headrest on Hamilton's W08 worked loose. Hamilton was unable to resecure it, and the team was ordered to bring him in on safety grounds. Simultaneously, Vettel was penalised for his earlier spat with Hamilton behind the safety car. Ricciardo was left in control of the race with Stroll and Magnussen now in podium contention. Once the unscheduled stops had worked through, Vettel was in seventh place just ahead of Hamilton.

The pair made short work of passing Alonso, Magnussen and Ocon. Bottas had preceded them and was up to third, but was ten seconds behind Stroll with 12 laps remaining. He soon reeled in the Williams but still looked too far back going into the final lap. However, the Finn made a mighty lunge and took the position from the teenager by a slender margin at the line. 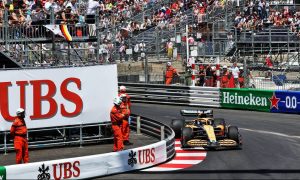 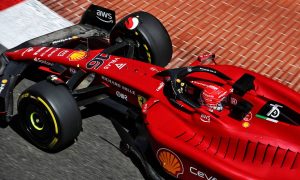