Snow which fell overnight in the Barcelona area and persistent low temperatures are likely to wreak havoc on teams' plans for Day 3 of pre-season testing at the Circuit de Catalunya.

Today's session has been postponed indefinitely, or at least until the medical helicopter is able to operate, an FIA pre-requisite to any running taking place at an official F1 event.

Since testing kicked off on Monday teams have been forced to compose with near sub-zero C° temperatures in Barcelona, conditions which saw many teams limit their running yesterday.

The inability for drivers to bring tyres up to optimum working temperatures impacted testing and performance runs.

As teams evaluate their options, Haas team boss Guenther Steiner believed the prospects for Wednesday looked bleak, according to comments relayed by Racefans.net.

"I think it's cold again and raining all day," said Steiner.

"I checked this morning and snowing again until nine, 10 o'clock. It's not really snow but it will be cold.

"I think if we're going to have a day like this, wet the whole day and if it is wet and only four or five degrees there is no point to go out there.

"You don't learn anything, you will never run in this circumstances and anything you do you risk the car. Being the first test of the season we are lean on spares and we can't risk it.

"And at the moment it doesn't look better on Thursday. It's getting warmer but still wet." 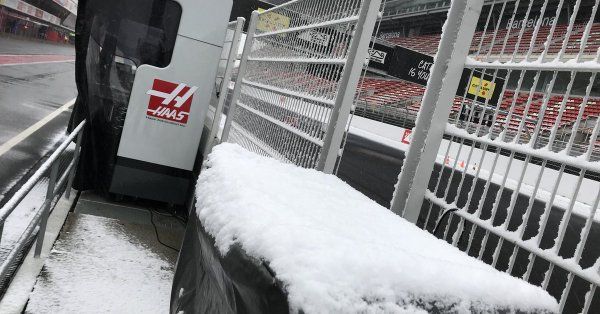 Extending the week into Friday was one option under consideration by teams, but Williams have booked the track for filming purposes which implies that any change would require a unanimous agreement from the teams, a rare occurrence in F1.

"We rented the track and this is an important day for us," said Claire Williams.

"Having said that I don't think everyone else supports the extension of the test. If there is an unanimous decision, perhaps we can find a compromise and do an extra day next week. So far no decision has been taken.

"I suppose it's one of the risks we take by testing in Barcelona. This isn't Bahrain!

"If it's a concern, then we need to discuss at the strategy group where we should hold the tests next year."

F1i will be live from Barcelona this morning from 8:45am CET to keep you abreast on conditions and how the day shall unfold.