Red Bull's Daniel Ricciardo shot to the top of the timesheets on day 6 of pre-season testing on Wednesday. He did so by breaking the unofficial lap record for this configuration of the Circuit de Barcelona-Catalunya. Along the way Ricciardo completed a total of 165 laps, the most of any of the runners.

The Australian's best time of the day was 1:18.047s, bettering the previous record set by Felipe Massa a decade ago in 2008. It was over a second quicker than Lewis Hamilton’s 2017 Spanish Grand Prix pole position of 1:19.149s for Mercedes. The lap was also quicker than any lap in last year’s winter testing, although the track has been resurfaced in the interim.

However there was more bad news for McLaren. Fernando Alonso laid down an impressive marker of 1:19.856s in the morning, only for the MCL33 to suffer an oil leak. It forced the team to swap out the engine. Alonso ended up missing all but the last 15 minutes of the day's running, a big setback for the already struggling team.

Teams opted to run without a lunch break on Wednesday, to make up for some of the track time lost to the weather last week. After a chilly start, warmer and sunnier conditions soon helped the action to heat up nicely.

Midway through the day's proceedings, Ricciardo had already set the best time of the day and the year so far with 1:18.357s as he finally got to try out the hypersoft tyres. Lewis Hamilton was less than half a tenth back in the Mercedes on the more familiar ultrasofts.

Ricciardo soon improved on that flying lap to pull almost four tenths away from Hamilton. The reigning world champion then handed over the W09 to team mate Valtteri Bottas for the afternoon. The Finn ended up third fastest for the day, a tenth and a half off Hamilton who'd had the better of the conditions.

Sebastian Vettel had been in action for Ferrari in the morning and was fourth fastest, albeit a second back on 1:19.541s. He had sat in at short notice for his unwell team mate. However, Kimi Raikkonen felt better by lunchtime and took over in the afternoon for 46 laps the best of which was 1:20.242s. 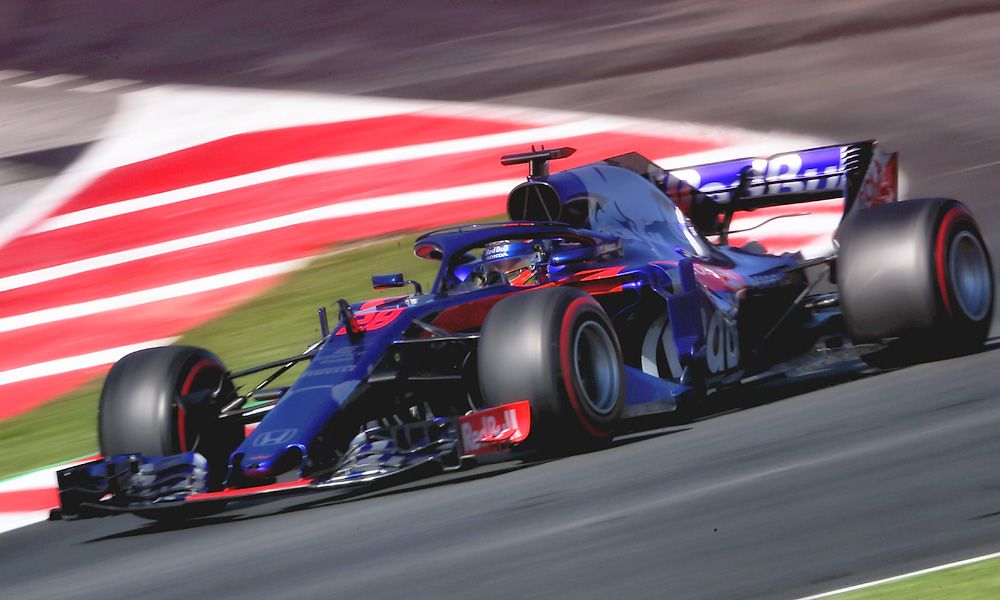 A late afternoon lap on ultrasofts from Brendon Hartley meant the Toro Rosso displaced Alonso from fifth with a time of 1:19.823s. The Kiwi had earlier suffered a spin and a stoppage at the pit lane exit, but still completed 118 laps.

Carlos Sainz had been unable to dip below the 80-second mark in his 88 laps behind the wheel in the morning. His Renault team mate Nico Hulkenberg worked on distance runs and was three quarters of a second slower in his spell after lunch, but put in 102 laps.

Romain Grosjean continued a solid midfield showing from Haas in this week's testing. He was eighth fastest for the day and just five thousandths of a second faster than Raikkonen.

Williams once again divided driving duties between Lance Stroll and Sergey Sirotkin. Stroll was the fastest of the pair with a lap of 1:20.349s on soft tyres in the morning. The FW41 stopped in the pit lane mid-afternoon, robbing Sirotkin of track time. He ended up the slowest man on track on Wednesday, some two and a half seconds off the rest of the runners.

Esteban Ocon continued what's been a muted test for Force India. He ran 130 laps but was only 12th fastest with a best time of 1:20.805s.

Sauber's Charles Leclerc completed and impressive 160 laps - twice Grand Prix distance - but ended the day in the gravel at turn 12. That mishap triggered a red flag with four minutes left in the session. Quantity didn't mean quality however, and Leclerc's best time of 1:20.918s was only the the 13th fastest of the 14 drivers in action.

Does Tommy Hilfiger deal mean Hamilton has re-upped at Mercedes?