Lewis Hamilton claimed pole position for the first French Grand Prix in a decade, with an impressive Q3 run clocking in at 1:30.029s

He will be joined on the front row of the grid by his Mercedes team mate Valtteri Bottas who was just 0.118s off Hamilton's pace. Sebastian Vettel could only manage third fastest, putting the Ferrari on the second row alongside Red Bull's Max Verstappen.

Both Haas cars made it through to Q3, only for home hero Romain Grosjean to spin out on his flying lap causing the session to be briefly red flagged.

Charles Leclerc also made it through to the final round in an impressive showing for the Sauber. However there was gloom for McLaren and Williams, with all four cars falling at the first hurdle.

After the shock of the downpour that had all but wiped out final practice earlier in the day, the weather was back to its south of France summer best in time for qualifying with blue skies, sunshine and puffy white clouds overhead. However, the forecasts said there were possible further light showers in store.

In the meantime, the Circuit Paul Ricard itself had rapidly dried off after its morning soaking. Air and track temperatures were also recovering as the hour approached for the start of qualifying, and fans were filling the grandstands after a better commute in to Le Castellet than the unfortunate gridlock that they had experienced on Friday.

First into action for the 18-minute Q1 round was Lance Stroll, quickly followed by his Williams team mate Sergey Sirotkin, the Toro Rossos of Pierre Gasly and Brendon Hartley, and Le Mans winner Fernando Alonso and his McLaren team mate Stoffel Vandoorne. Everyone was straight onto ultrasofts, and the initial pace was set by Stroll who clocked in with a 1:34.725s.

Haas' Romain Grosjean and Kevin Magnussen soon went some two seconds faster, but the top teams had held back before venturing out on track. When Red Bull finally got down to business, Max Verstappen found another six tenths to go top with a time of 1:31.823s which was immediately pipped by Mercedes' Valtteri Bottas and then by the Finn's team mate Lewis Hamilton, who was complaining of a problem with the padding in the cockpit.

Kimi Raikkonen then went quicker still to go top by 0.022s, while Sebastian Vettel was only fifth fastest in the second Ferrari. Meanwhile Daniel Ricciardo had a mediocre first run that was only good enough for seventh, slotting him behind Grosjean.

Having lost running time in FP3, no one needed to be worried about tyres in this session and so everyone was soon back to work. Hamilton went top this time with an improved lap of 1:31.271s with Verstappen also going faster to move ahead of Raikkonen, Bottas and Vettel. Ricciardo's latest flier was good enough to move him to sixth ahead of Grosjean and Magnussen.

All these fast laps had left Stroll at the bottom of the pile and at serious risk of elimination along with Sirotkin, with Force India's Sergio Perez and Sauber's Marcus Ericsson also in danger along with the two McLarens. Stroll's attempt to avoid the cut saw the Williams run wide, sealing his fate, but both Perez and Ericsson found the pace needed to jump to safety.

Alonso also improved, only for others to go faster and squeeze him back down into the elimination zone along with Vandoorne. Ending up joining the McLaren and Williams cars on the sidelines was Brendon Hartley. 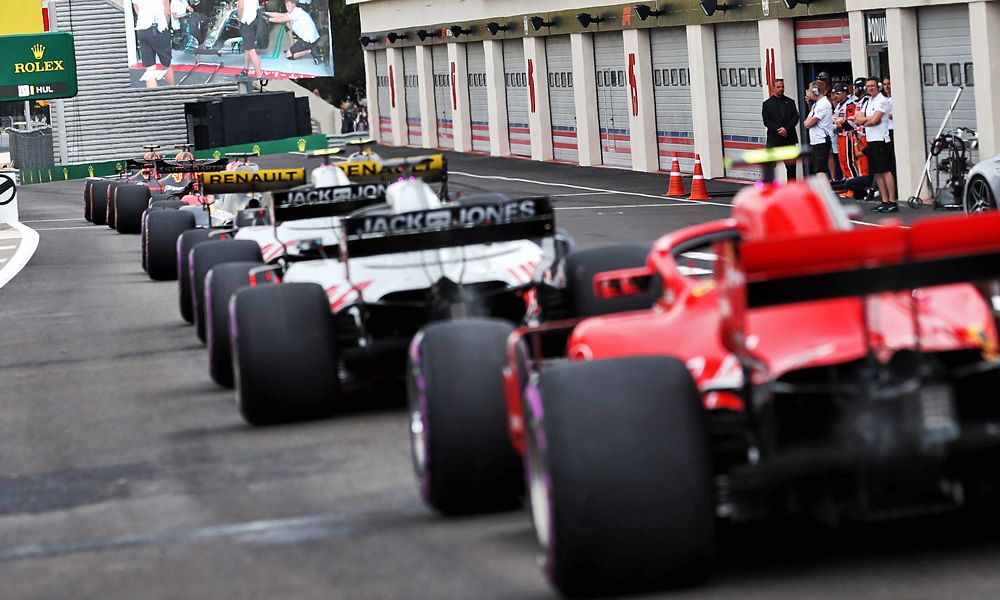 Q2: Leclerc puts Sauber through to final round

Drivers had reported drops of rain falling in the final seconds of Q1, so cars were lined up on pit lane to get out on track as soon as possible in case the drizzle picked up and became more serious. Ferrari was sticking with ultrasofts, while Mercedes and Red Bull both had an eye on Sunday strategy and were sporting supersofts for their runs.

Grosjean once again put in an impressive run to briefly go top with a 1:32.075s ahead of Renault's Carlos Sainz before Raikkonen went to the top with a 1:32 dead. Bottas found another seven tenths on that, and Hamilton's effort trumped even that by over half a second. The Red Bulls couldn't match that and Verstappen was sixth fastest ahead of Ricciardo. Vettel was still struggling to find the raw pace from his Ferrari and was only eighth fastest after the first run.

The weather continued to hold at 'light drizzle', which allowed drivers to make further runs. Vettel in particular had a much better run to leap into second place behind Hamilton and just ahead of the latest effort from his team mate, demoting Bottas to fourth. The Red Bulls were also improving, Ricciardo up to fifth in front of Verstappen while Magnussen had similarly moved ahead of Grosjean for seventh. Sainz and Perez were the final two cars in the top ten, leaving Gasly on the wrong side of the cut line along with Ocon, Leclerc, Ericsson and Hulkenberg.

The rain finally abated, suggesting that the track would start to get quicker - meaning that everyone had to be out on track in the final minutes of Q2 in case their rivals made rapid improvement in the dying seconds. Verstappen moved to fourth, while Grosjean and Magnussen improved to sixth and seventh to push Ricciardo down to a slightly precarious eight. However the biggest gainer from the situation was Leclerc, who jumped into the top ten at the expense of Perez. It's the first time Sauber has made it through to the final pole shoot-out round since the 2015 Italian Grand Prix. 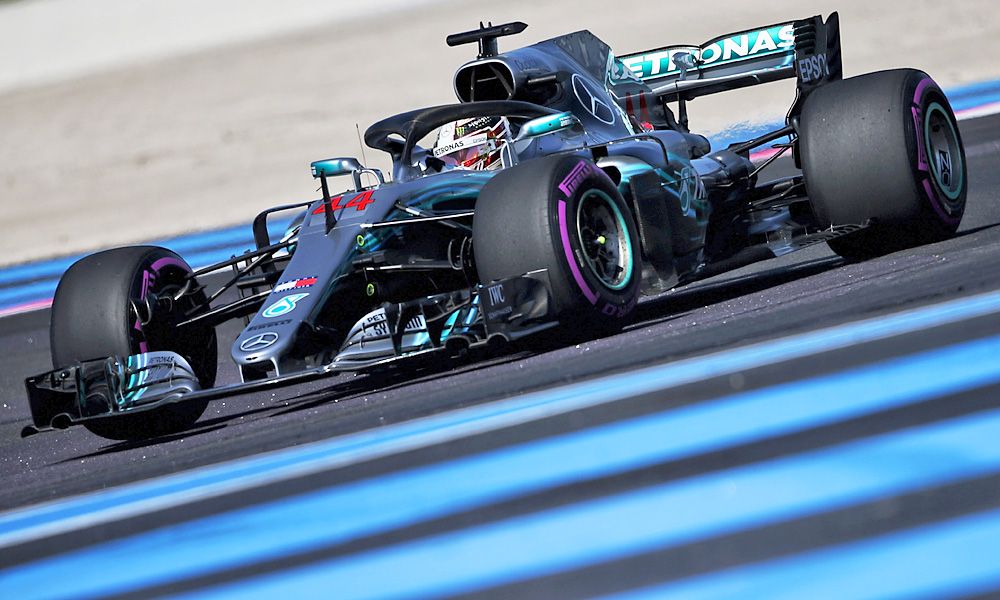 Rain remained a threat as the top teams all headed straight out in Q3, but the times continued to improve. Hamilton put himself on provisional pole with an impressive 1:30.222s, just under a tenth faster than Bottas.

Vettel remained in touching distance of the Silver Arrows in third ahead of Verstappen and Ricciardo, while Raikkonen was once again suffering from his Q3 drop-off and was only sixth fastest ahead of Sainz thanks to a touch of oversteer on his run.

The Haas pair came out later than the others, and Grosjean was in the process of setting his first flying lap time when the car suddenly snapped right in turn 4, sending him into the tyre barriers and causing the session to be red flagged while the VF-18 was retrieved. It also meant that Magnussen's own qualifying run had to be aborted.

When the session resumed, Bottas briefly succeeded in going fastest, but his hopes of pipping pole were immediately swept aside by an even better lap from Hamilton. Vettel by contrast had a scrappy final run and had to settle for third ahead of Verstappen, while Ricciardo maintained fifth after a slow final run from Raikkonen putting the Finn in sixth ahead of Sainz.

Having done more than could have been expected from him in Q2, Leclerc opted to wait until the end of Q3 before making an appearance. He will start from eighth place on the grid for Sunday's race ahead of Magnussen, with Grosjean set to start from tenth place.

What went wrong at McLaren? 'Nothing' says Alonso!