Lewis Hamilton claimed his 65th race win in Formula 1 with an untroubled run in the French Grand Prix in Le Castellet to regain the lead in the 2018 world championship.

The Mercedes led virtually the whole race from lights out to chequered flag, finishing seven seconds ahead of second-place man Max Verstappen in the Red Bull.

Ferrari's Kimi Raikkonen successfully caught and passed Daniel Ricciardo in the closing laps to take the final place on the podium at the Circuit Paul Ricard.

Sebastian Vettel's race had been compromised at the first corner when he shattered his front wing tagging the rear of Valtteri Bottas' car. Vettel was able to recover to fifth place, while Bottas finished the race in seventh.

Having locked out the front row of the grid in Saturday's qualifying session, Mercedes were in control when the lights went out. Pole sitter Lewis Hamilton pulled away smoothly at the front, but Valtteri Bottas found it harder to stay ahead of Sebastian Vettel's Ferrari, which was on the faster ultrasoft tyres for its first stint compared to supersofts on the Mercedes and Red Bull cars.

Bottas was able to late-brake and went into the first corner ahead, but Vettel locked up and tagged the back of the Mercedes. The contact wrecked his front wing, and punctured Bottas' left rear tyre. Both were limping back to pit lane when a safety car was scrambled for a separate incident that had occurred two corners later between French drivers Pierre Gasly and Esteban Ocon. A collision had left debris strewn over the chicane, and both the Toro Rosso and Force India were out of the race.

Vettel and Bottas were able to rejoin after being serviced on pit lane, but they were now at the back of the field. They had both taken soft tyres with a view to running to the finish, and the same idea had occurred to a number of other drivers including McLaren's Fernando Alonso.

The race resumed on lap 6 with Hamilton leading from Max Verstappen and Carlos Sainz, and Daniel Ricciardo up to fourth ahead of Kevin Magnussen. Sauber's Charles Leclerc had used the opening chaos to leap up to sixth ahead of Kimi Raikkonen, but the Ferrari quickly corrected that state of affairs when the race went back to green flag racing. Ricciardo likewise soon took care of Sainz for third. 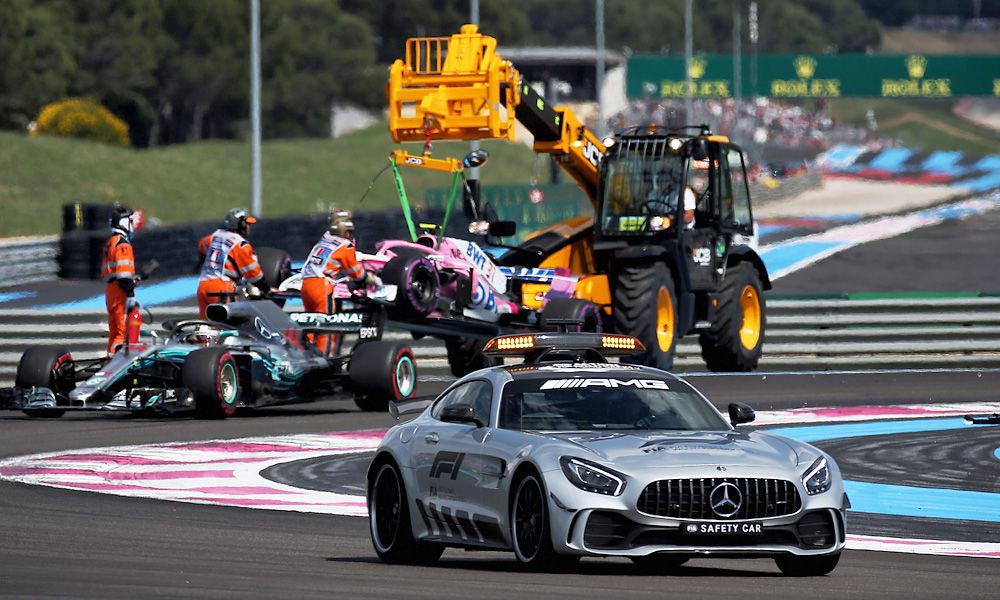 At the back, Vettel was soon marching his way back up the order. He made quick work of Alonso, who was startled by the Ferrari's move into a spin at turn 4. The two Williams cars also presented no obstacle to Vettel's progress, and he then swiftly dispatched Brendon Hartley in the remaining Toro Rosso before lining up Marcus Ericsson and Stoffel Vandoorne for similar treatment. That put him knocking at the door of the top ten, but there was also confirmation that race stewards had handed him a five second penalty for spinning Bottas at the start.

Just as Raikkonen was passing Sainz for fourth place on lap 12, Vettel took care of Nico Hulkenberg in the second Renault for tenth. Two laps later he was also past Sergio Perez for ninth. Bottas was having a slightly harder time following Vettel through the traffic, his Mercedes compromised by floor damage from the original incident. Even so, he was only three seconds off the back of the Ferrari as both drivers succeeded in making themselves factors in the race again.

At the front, Hamilton had pulled out a four-second lead at the front over Red Bull pair Verstappen and Ricciardo. He then put in a new fastest lap of the race after being told that Vettel was already back up to sixth having put Grosjean, Leclerc and now Magnussen in the Ferrari's rear view mirror. On lap 20 it was time for Vettel to take care of Sainz, which meant that he was fifth albeit over 15 seconds behind his team mate. Although he technically had a pit stop in hand over the cars ahead, any further progress for Vettel would now be hard to come by.

A dramatic change in the weather would certainly have turned the situation on its head, and black clouds were indeed starting to crowd into the skies overhead. However the threat of rain did not deter Red Bull from calling Verstappen in on lap 26 for his tyre change to the soft compound, the pit crew getting him back out on track just in front of Vettel.

Ricciardo stayed out for another three laps, but he was unable to find the gap he needed over the Ferrari. When he filtered back out it was in fifth place right behind Vettel, but he had the advantage of a fresh set of soft tyres. Sure enough, five laps later Ricciardo was able to out-brake Vettel into turn 11 to make a point, and moreover to retake fourth

With major traffic heaving into view ahead of him, Hamilton made his pit stop on lap 33, handing the lead to Raikkonen who was yet to stop. If the idea was to use the Finn to back Hamilton into the clutches of Vettel then Raikkonen was in no mood to play, and he pitted on lap 35 which dropped him back to fifth behind his team mate.

Ferrari had opted for a tyre gamble by putting Raikkonen out on supersofts. It gave him a performance advantage over those ahead of him - and in particular his team mate, who was now starting to struggle on the ageing softs he had taken on at the end of lap 1. Vettel finally yielded to the inevitable and allowed Raikkonen past on lap 40 before pitting next time by for fresh ultras.

Mercedes likewise pitted Bottas for a new set of tyres, but a problem at the right rear meant it was a slow stop which dropped Bottas behind Sainz and Magnussen. He returned to the track in eighth place, ahead of Hulkenberg and Leclerc who rounded out the top ten.

Just when it appeared as though the top positions were set fair to the finish, Ricciardo's pace waned dramatically having suffered front wing damage from a piece of debris. He was soon caught by Raikkonen who blasted past him on the run into Mistral on lap 47 to snatch the remaining podium place away before the finish.

There was also a late retirement for Lance Stroll, who stopped at the high-speed Signes when a tyre that had been on the car since the second lap dramatically blew out. It resulted in a Virtual Safety Car which persisted almost to the chequered flag, making for a muted finish to what had been a generally engrossing race - albeit not one where the win was ever in doubt.

Carlos Sainz narrowly survived a late scare with a loss of power, although he dropped to eighth place behind Bottas as a consequence. It meant that other than Stroll, Gasly and Ocon, the other other retirement of the day was Sergio Perez who exited on lap 30 with a suspected engine issue. Given that he had been one of the recipients of Mercedes' new 'phase 2.1' upgrade this weekend, it could potentially signal a major reliability concern for the Silver Arrows.

Silverstone and F1 all set to kick off British GP talks

Lauda unhappy with 'too little' penalty handed out to Vettel