Lewis Hamilton seemingly lacked the pace to challenge and had to settle for second, meaning that the Mercedes driver's championship lead over Vettel has been trimmed back by seven points.

The race had started with a dramatic multi-car accident triggered by Renault's Nico Hulkenberg running into the back of Fernando Alonso. The impact launched the McLaren over the top of the unfortunate Charles Leclerc in the Sauber and brought out a first lap safety car. 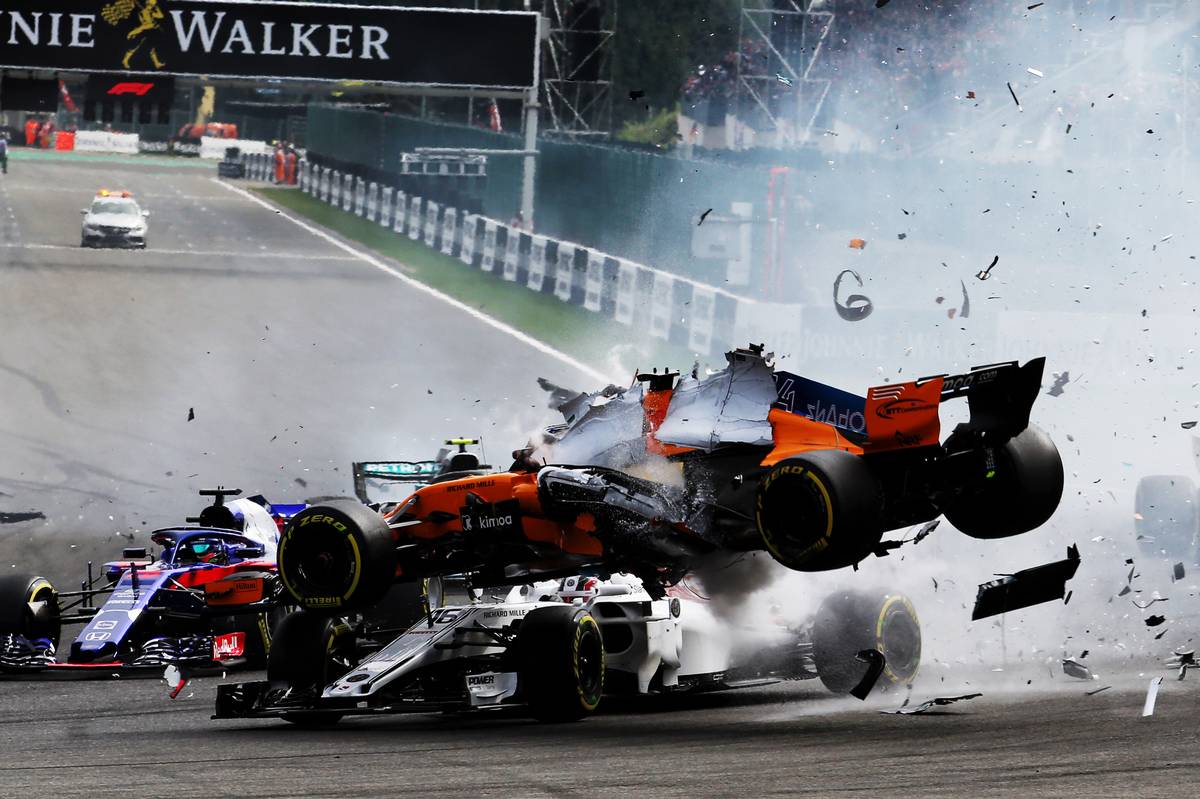 The blue skies over Spa were pleasingly benign for the start of the race, suggesting little in the way of showers that had caused such mayhem 24 hours ago in qualifying. While the front row had a familiar look with Lewis Hamilton on pole alongside Sebastian Vettel, after that the grid was distinctly topsy-turvy with Force India's Esteban Ocon and Sergio Perez painting row two a pleasing pink.

When the lights went out, this jumbled line-up piled down to La Source. The top four made it through the first corner cleanly, Vettel then getting the better run up to Eau Rouge which allowed him to blast past Hamilton on the Kemmel Straight. Right behind them, Perez used the opportunity to get the better of his young team mate for third.

The passes were all completed before the safety car was scrambled: further back on the grid, things had got predictably messy. Nico Hulkenberg found himself caught out and missed his braking point into the hairpin, the Renault ploughing into the rear of Fernando Alonso's McLaren. The crumpled MCL33 was sent flying into the back and over the top of Charles Leclerc's Sauber, all three cars heavily damaged and out on the spot.

That carnage alone was enough to trigger the safety car, but there had been further casualties of the jostling into the first corner. Daniel Ricciardo had suffered major damage to his rear wing in the incident, and collided in turn with Kimi Raikkonen. Both cars were forced to pit for repairs with the Red Bull going two laps down in the process. Raikkonen's damage initially appeared to be limited to a puncture, but more serious structural issues were soon apparent and he was eventually forced to retire on lap 9.

When the race resumed on lap 5, Vettel held on to the lead ahead of Hamilton, Perez and Ocon with Max Verstappen up to fifth ahead of the two Haas cars of Romain Grosjean and Kevin Magnussen. They were followed by Gasly and by Marcus Ericsson in the sole surviving Sauber, with Sergey Sirotkin rounding out the top ten ahead of his Williams team mate Lance Stroll.

Vettel was soon pulling away from Hamilton at the front. Ocon tried but failed to get past Perez, only to fall victim a lap later to a lovely attack from Verstappen at Les Combes, who then set his sights on catching and passing Perez for third on lap 10. That move was greeted by a huge roar of approval from the hoards of delighted Dutch fans watching along the Kemmel Straight. 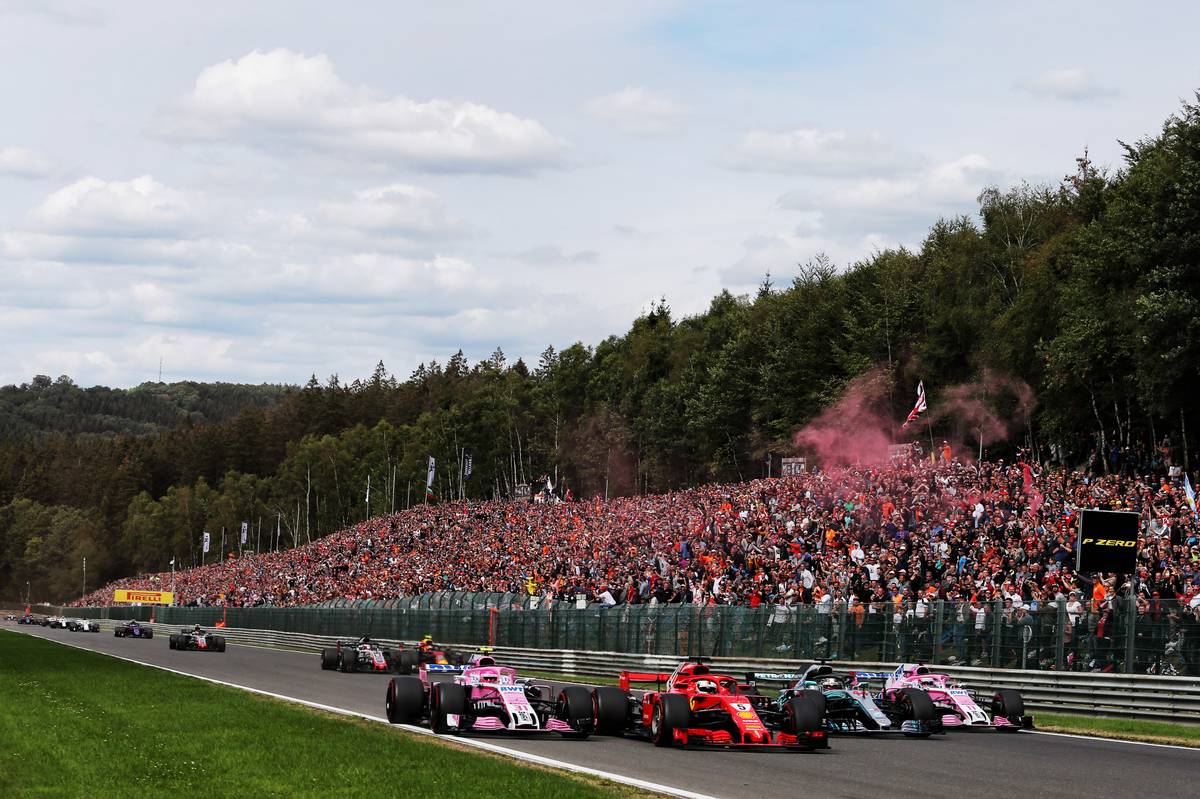 Having started from the penultimate row of the grid due to grid penalties for new power unit components, Valtteri Bottas had also been forced into an early stop for precautionary checks after hitting the back of a Williams in the first lap mêlée. Fortunately the Mercedes was unharmed and he took the opportunity to switch to a new set of supersoft tyres which allowed him to start blasting its way back through the field.

He was into the top ten on lap 12 after a succession of brisk overtakes on the slower cars at the back, and up to eighth on lap 17 with a pass on Ericsson. However all that effort was taking its toll on Bottas' tyres which were showing a line of blisters at the rear. He wasn't alone, Hamilton showing similar signs of wear and tear and even Vettel starting to struggle for rear grip.

Mercedes jumped first, calling in Hamilton for soft tyres on lap 22. Ferrari reacted as quickly as possible next time around to ward off the undercut and getting their man back out on track still in the lead. Although the gap over Hamilton had been slashed it wasn't enough to put the Briton into DRS reach, and Vettel was soon busy rebuilding his advantage.

The pit stops had briefly brought Verstappen into the mix, but the Red Bull was still on old tyres and soon dropping away from the lead pair. He was called in for his pit stop on lap 27, just after Force India had pitted both Perez and Ocon, meaning that he came back out still in third place with little prospect of making further progress. "Any chance of rain maybe?" he asked plaintively over the team radio. The answer was that there wasn't.

Ericsson had also made his stop, coming back out just behind Toro Rosso's Brendon Hartley but soon making quick work of the yet-to-pit Kiwi at La Source to restore him to tenth place on lap 29. That kept him ahead of Renault's Carlos Sainz, who had succeeded in passing Sirotkin around the outside under braking for Les Combes. Meanwhile Bottas had made his way all the way up to fourth before finally pitting on lap 30, which dropped him back to sixth place between the two Force Indias ahead and the pair of Haas cars behind.

Bottas' day wasn't done and he used DRS to take fifth from Ocon on lap 33. He then set a new fastest lap of the race as he hunted down Perez, the Mexican telling his race engineer "I'm giving it everything, man!" as he exhausted himself trying to hold on to fourth. Despite his best efforts, eventually he was forced to yield the position to Bottas with four laps remaining. 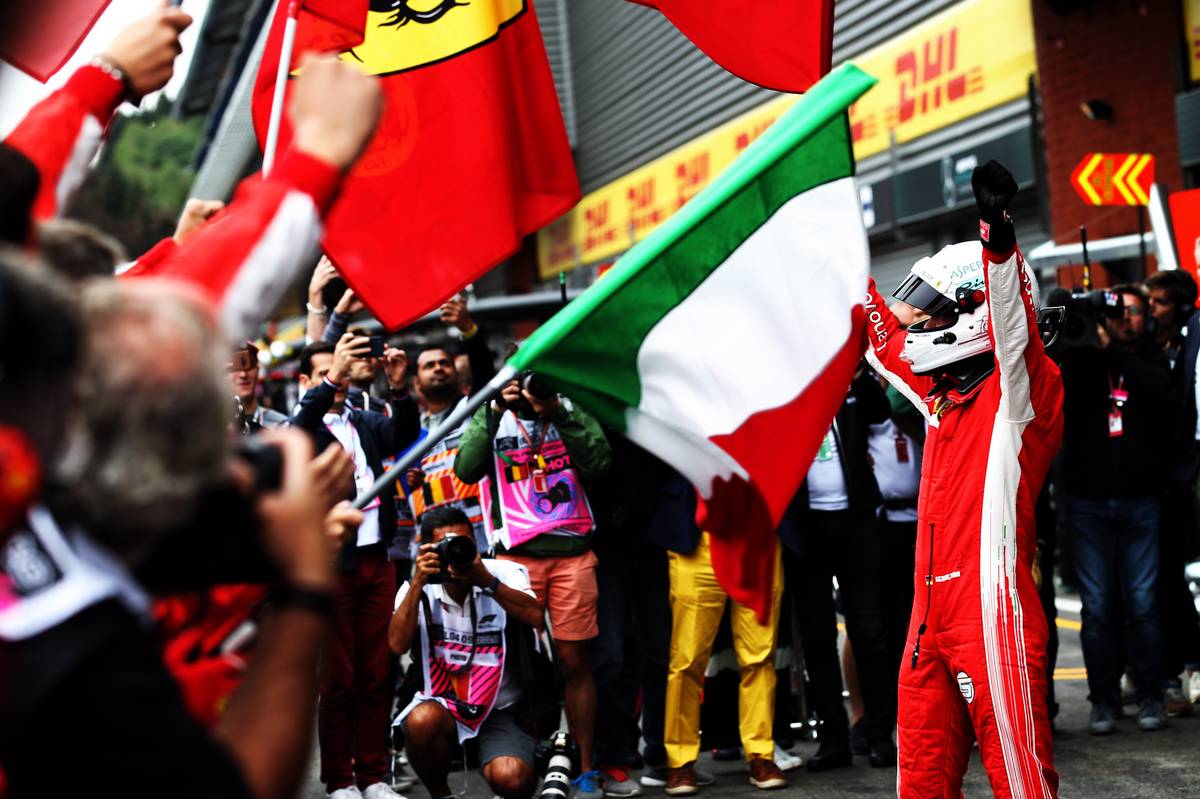 Vettel's now-ten second lead was unassailed to the chequered flag. His 52nd career F1 victory means that he has reduced the gap in the drivers championship between himself and Hamilton to just 17 points heading to Ferrari's home race at Monza next weekend. However points from both Hamilton and Bottas mean that Mercedes' advantage over the scuderia in the constructors championship has actually slightly increased by five points.

In its first outing, the 'new' Force India team succeeded in moving off the bottom of the team standings. That was thanks to the impressive qualifying and race performance of Perez and Ocon delivering a double points success which picked up a total of 18 points putting them just one point behind Sauber for eighth place.

Both Haas cars had finished in the points, meaning that they have cut the gap to Renault to just six points in the fight for fourth place in the championship.

Gasly and Ericsson rounded out the top ten meaning that Sainz failed to score for the French works team, while Hartley and Stoffel Vandoorne finished the race in last place behind Sirotkin and Stroll, Williams suffering another pointless outing.

Hulkenberg owns up to first lap mistake, but gets big penalty