Just a few weeks ago the very survival of Force India in Formula 1 was in doubt after it was plunged into administration. But since the takeover by the Racing Point consortium, everything has once again been looking a lot rosier for the pink panther team.

That recovery continued on Saturday with another strong qualifying performance by Sergio Perez and Esteban Ocon, who managed to put both cars into the top ten on the grid for tomorrow's Singapore Grand Prix.

"Throughout qualifying Sergio and Esteban delivered the laps we needed to progress to Q3," said team principal Otmar Szafnauer. "Seventh and ninth places are a great return for the team’s hard work so far.

"The team did an excellent job tonight and we start tomorrow’s race with a great opportunity to score well with both cars."

The team was stripped of its championship points following the takeover, but has already recouped 32 points since the summer break. That's moved it back into seventh place in the standings with hopes of catching McLaren, Haas and Renault before the end of the season.

With that objective in mind, the team has rolled out a major aero upgrade to the 2018 car this weekend. After being tried out in Friday's free practice sessions, it got the thumbs up from the drivers.

"[Seventh place in qualifying] goes to show that our upgrade package is already making a difference," said Perez. "This is a track that normally doesn't play to our strengths, so I was pleased at the pace we have shown.

"I produced a nearly perfect lap on a track where it is hard to achieve it. We're ahead of our direct rivals and just behind the leaders. We had an advantage of four tenths on the Haas and six tenths on the Renault." 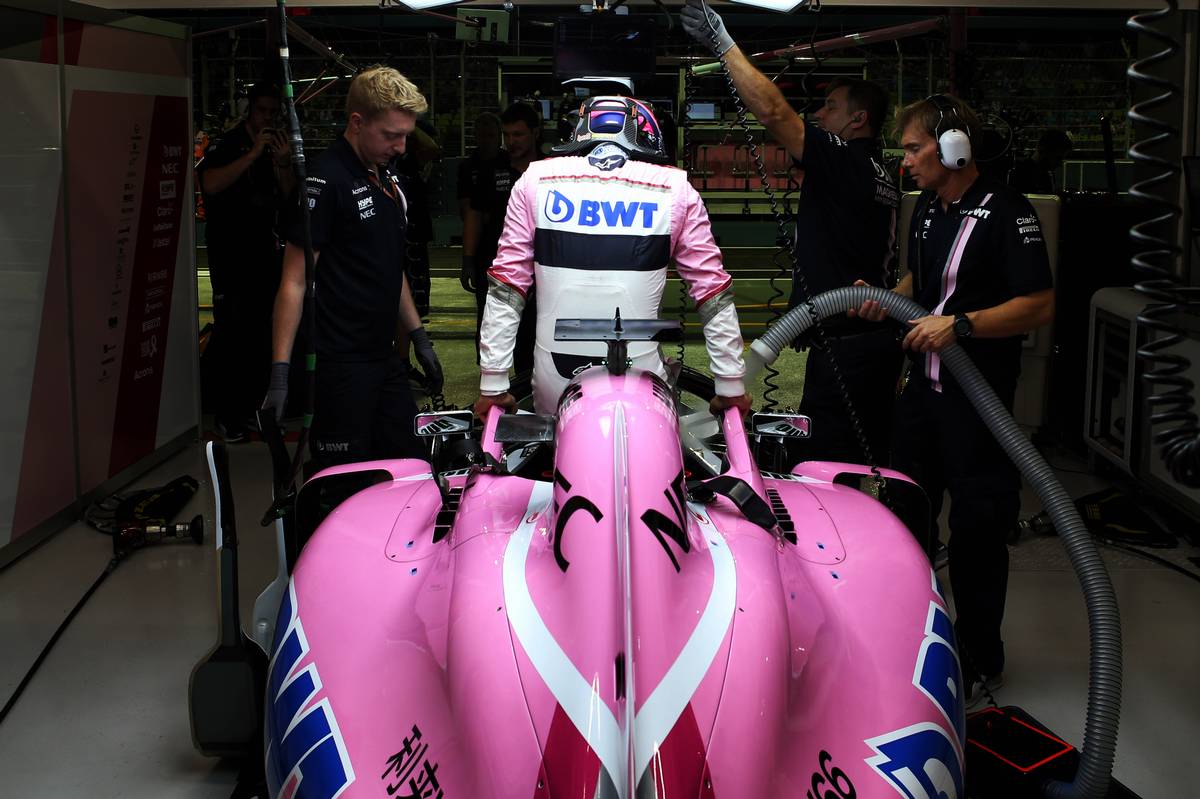 Ocon also said he was "quite pleased" with the outcome of Saturday's session, despite brushing the wall in his final run which cost him vital tenths.

"We had a great car and the upgrades worked really well, so we can be happy with what we achieved," he said. "I think we will have the race pace to score good points.”

"I want to recognise the efforts back at base to get the new parts to the track," added Szafnauer. "And the long hours worked by the mechanics on Thursday and Friday nights to get us to this point.

"Of course, it’s only Saturday and the main challenge is yet to come, but we have put ourselves in a strong position to have a good Sunday and we can be satisfied with our performance today.”

The team did have one setback during the day after being given a 5,000 euro fine for an unsafe release on pit lane.

Ocon had a near-miss with Kevin Magnussen's Haas as he performed a burn-out to lay down some rubber outside the team garage in order to improve grip during pit stops in tomorrow's race.

Grosjean on song in Singapore as Magnussen struggles