New Ferrari driver Charles Leclerc took over from veteran Sebastian Vettel at the wheel of the SF90 on the second day of official F1 pre-season testing, but that didn't mean there was any change at the top of the timesheets.

The 21-year-old headed the standings for most of Tuesday morning, ending up with a best lap of 1:18.247s on the medium C3 compound after 73 laps at the Circuit de Barcelona-Catalunya.

The time put him almost a second faster than the best of the rest at lunchtime. That proved to be Kevin Magnussen, after the Haas driver punched out a series of flying laps just before the chequered flag.

It put the Dane narrowly ahead of Antonio Giovinazzi in the Alfa Romeo, who was the only driver to set his fastest lap of the morning on the soft C4 tyres.

McLaren new boy Lando Norris was fourth fastest by the time the morning session concluded, after a flurry of late improved times as track temperatures climbed in the midday sun.

Red Bull's Pierre Gasly was fifth quickest. That was just ahead of Daniel Ricciardo, who completed only 28 laps after being sidelined due to a problem with his Renault which saw him spin at turn 1.

Pieces of the rear wing had come apart shortly after he left the pits mid-way through the morning. It left the team scrambling to retrieve the pieces and get to work effecting repairs.

Despite losing time on track, Ricciardo still ended the first half of the day's running faster than Mercedes' Lewis Hamilton, who put in the most of laps anyone (74) before handing over the keys to Valtteri Bottas in the afternoon.

Also in action this morning in Spain was Alexander Albon at Toro Rosso, who triggered the first red flag of the day just four minutes into the session when he spun into the gravel at the exit of turn 4.

"It was a steering issue," team boss Franz Tost told the official F1 broadcast. "We changed something from yesterday to today but it didn’t work out as we expected. Therefore we changed once more to yesterday’s version."

Tost added that the team was stepping back its programme today to allow the rookie driver to focus on getting a feel for the car.

"There are not so many test topics today," he said. "For him it’s important to drive to get experience, to learn the car to get familiar with the car." 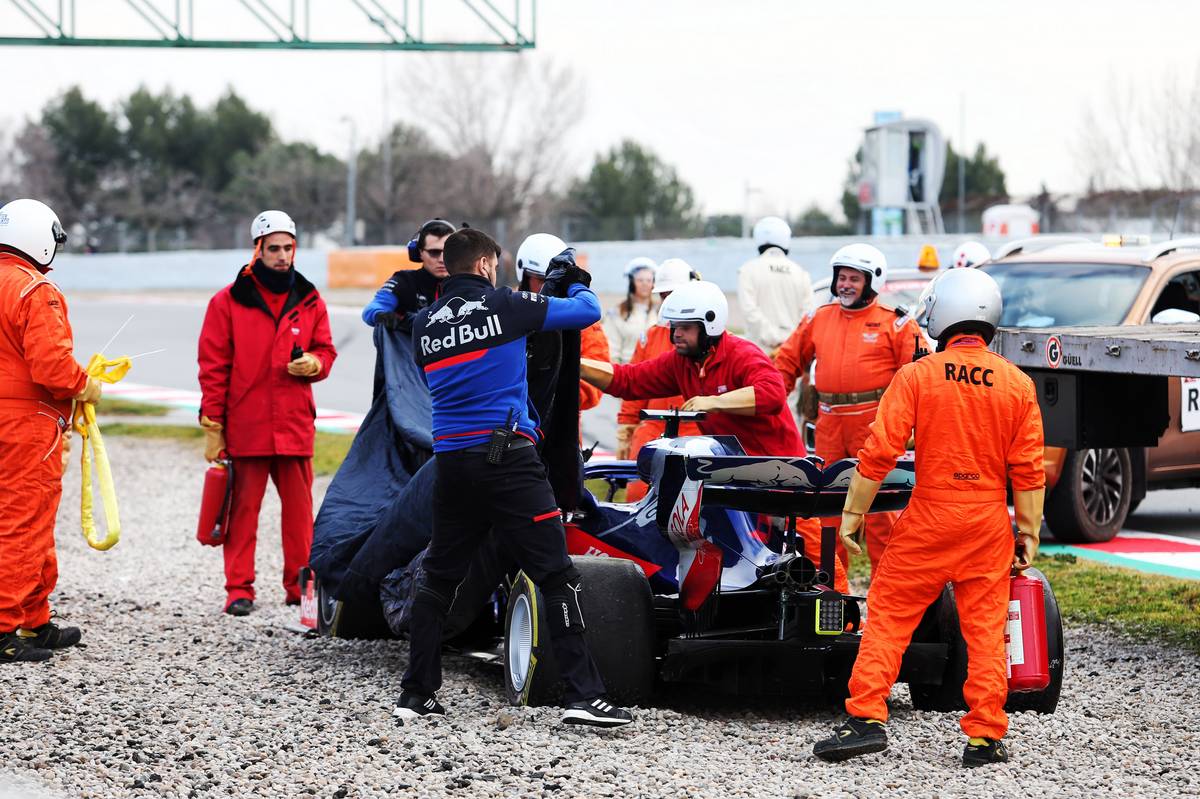 Albon was soon back out and went on to complete 57 laps, proving faster than Lance Stroll who is still getting to grips with his new Racing Point car.

Missing from the session altogether today was the Williams FW42. George Russell and Nicholas Latifi had originally been scheduled to take part, but the car is still not ready. As a result, Latifi will now no longer play any part in this week's testing, with priority given instead to Russell and his team mate Robert Kubica.