As expected, Mercedes claimed a dominant one-two in qualifying for Sunday's French Grand Prix, with Lewis Hamilton's sizzling 1:28.319s ensuring that he took an emphatic upper hand over team mate Valtteri Bottas by 0.286s for pole position. It's the Silver Arrows' 63rd front row-lock out.

Some four tenths further back. Charles Leclerc was the best of the two Ferraris and picked up third place on the grid, which means that he starts tomorrow's race alongside Red Bull's Max Verstappen

However he was very nearly pipped to fourth place by the McLarens of Lando Norris and Carlos Sainz. And it was a nightmare session for Sebastian Vettel who was only seventh fastest in the final round. 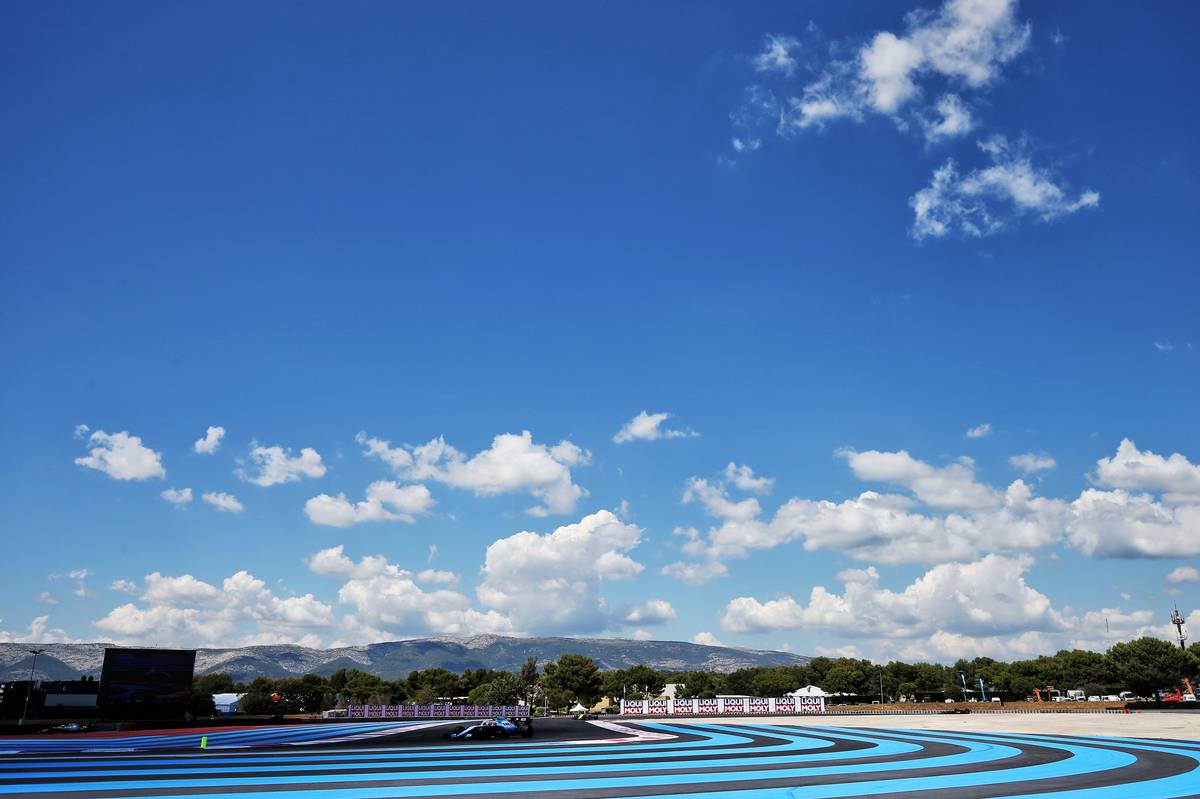 There was no shortage of sunshine in Le Castellet on Saturday, and the Circuit Paul Ricard was baking in the sunshine with track temperatures already hitting 55 Celsius as the drivers rolled out to get qualifying underway, Mercedes looking to have the clear upper hand over Ferrari and the rest of the field heading into the session.

Q1: Leclerc stays in touch with Bottas and Hamilton, Grosjean misses the cut

First on track was Daniil Kvyat, despite the Toro Rosso driver knowing he had already incurred a grid penalty for tomorrow's race due to exceeding his allowed quota of internal combustion engine components. He was followed by Racing Point's Sergio Perez and then by George Russell, Williams also likely to be hit by a penalty for the start of the race after being forced to make changes to its energy store and control electronics following a problematic final practice.

With everyone out on the soft compound, Perez recorded the first flying lap of the session with a time of 1:34.130s but this was soon bettered by Kvyat and then by Haas' Kevin Magnussen. Not so fleet of foot was Kimi Raikkonen, whose Alfa Romeo ended up running wide on his first run, as did Romain Grosjean in the second Haas as he sought to keep out of the way of faster cars.

Sebastian Vettel and Valtteri Bottas both had scrappy first runs, but Bottas improved next time around to go top with a time of 1:31.378s which put him 0.063s ahead of Vettel's Ferrari team mate Charles Leclerc. Meanwhile Lewis Hamilton opened his account two hundredths back in the second Mercedes, comfortably ahead of Vettel in fourth.

Best of the rest was McLaren's Carlos Sainz and Renault's Daniel Ricciardo, both looking on good form this weekend. Pierre Gasly could only manage seventh in the Red Bull, with the two Alfas of Raikkonen and Antonio Giovinazzi confirming that the team was in considerably better form this week than recent lacklustre outings. 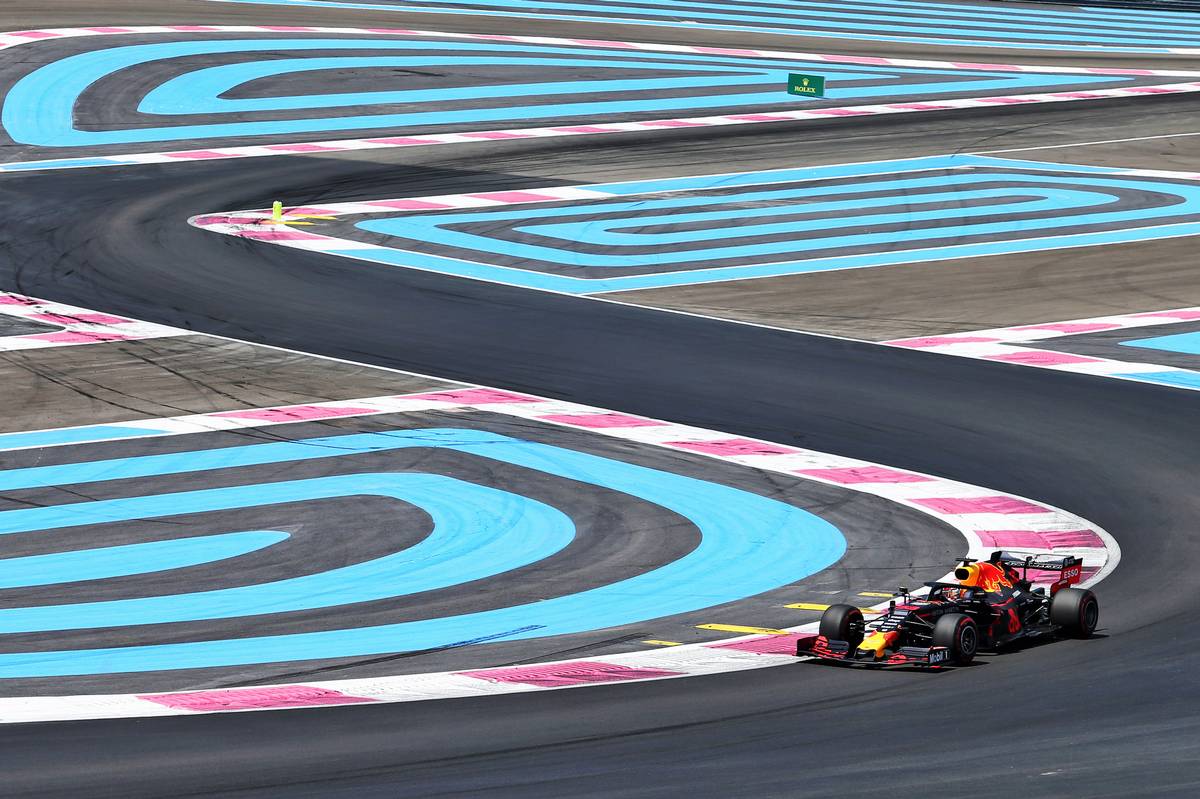 Max Verstappen's first run had been disappointing, two seconds off the leaders and down in 13th place. However he soon found more time in a clear second run and sprang up to fifth place, by which time Bottas had improved the top time to 1:30.550s. Hamilton had stayed with him to go second, now ahead of Leclerc and Vettel. That was job done as far as getting through to the second round was concerned, even though the two McLarens of Norris and Sainz soon improved to go fourth and fifth ahead of Vettel and Verstappen.

Struggling to avoid elimination were Racing Point's Perez and Lance Stroll, and the Williams cars of Russell and Robert Kubica, with Toro Rosso's Alexander Albon also at risk. However a late run by Perez saw the Mexican spring up to safety in the top ten, while Albon managed to eke out enough extra pace to scramble to 15th place and demote his team mate Kvyat into the elimination zone in his stead. However an error from Grosjean saw the Frenchman fail to take advantage of a rapidly improving track, and the Haas ended up in 17th place and out of qualifying after the chequered flag.

While the top three had remained unassailed in the final minutes, a flurry of late laps meant that Renault's Nico Hulkenberg and Daniel Ricciardo finished Q1 in fourth and fifth ahead of Perez and Raikkonen, who was placed under investigation by the race stewards for possibly obstructing Grosjean after briefly running off. The Finn was followed by Norris and Sainz, which meant that Vettel had been pushed down to tenth and Verstappen to 11th. Magnussen, Giovinazzi, Verstappen and Albon were the others to scrape through. 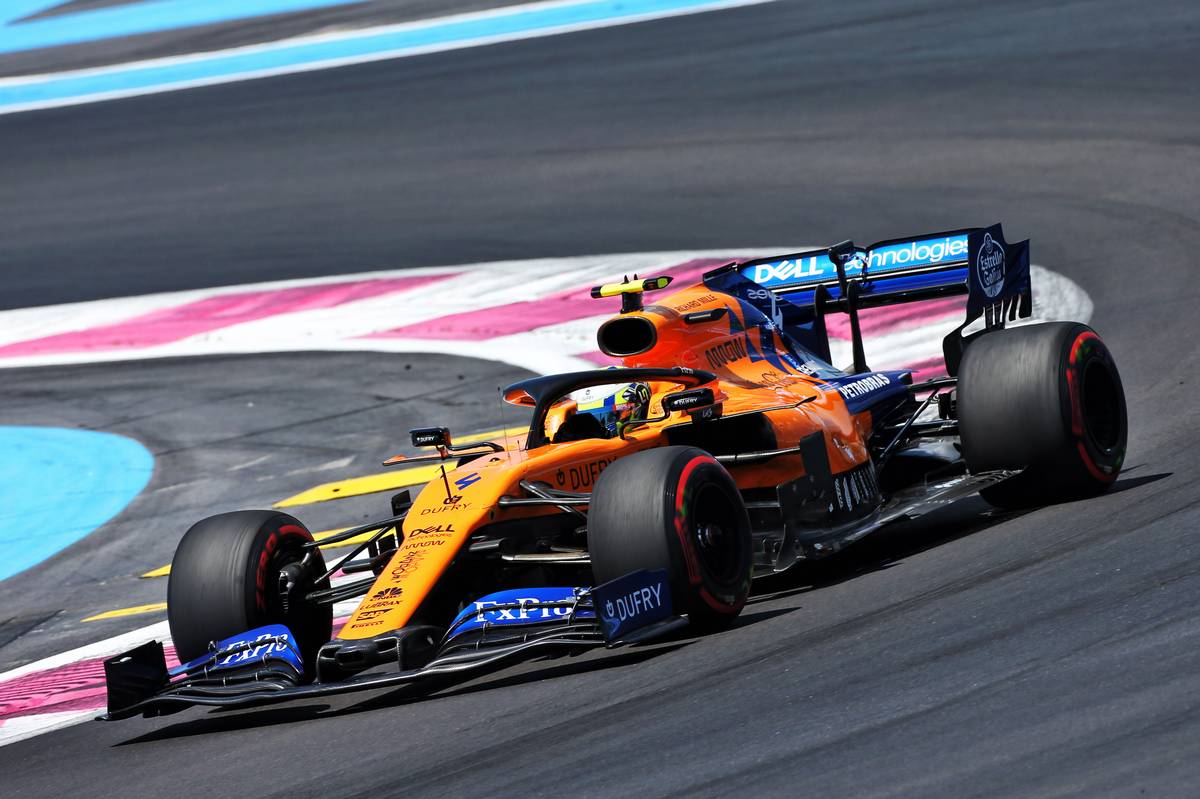 Q2: Front runners make it on mediums, Raikkonen and Hulkenberg miss out

Given their significant advantage in Q1, it was no surprise to see both Silver Arrows head straight out on medium tyres at the start of second round of qualifying, in a bid to be allowed to use the longer-lasting compound for the first stint of the race itself.

Hamilton's opening bid was an impressive 1:29.520s, half a second ahead of Bottas. There was almost another half a second back to Leclerc, Verstappen and Vettel who were all similarly attempting to follow the medium tyre gambit, with Gasly and Albon the fastest of the soft-shod runners.

Bottas edged ahead with his second run to raise the bar to 1:29.437s, but Hamilton didn't rise to the bait and instead pitted in order to preserve what was now set to be his initial set of race tyres.

Other drivers were also pitting, having decided that mediums tyres were the way to go as the soft compound failed to deliver the expected extra pace in the increasingly hot conditions. The switch was soon good enough to see the McLaren drivers into the relative safety of the top ten, together with Ricciardo. Conversely the only two cars on soft tyres to make it through to Q3 were Giovinazzi and Gasly. Unfortunately Albon was consigned to the elimination zone together with Raikkonen, Hulkenberg, Perez and Magnussen.

Meanwhile Bottas and Hamilton had gone the other way and went back out on sets of soft tyres - but it was only a precautionary measure in case anyone found a burst of extra pace and threatened their progression to the final top ten pole shoot-out. While that didn't happen, Vettel did find enough improvement on his early time to split the two Mercedes at the top of the time sheets with a final push on mediums as the round drew to a close. 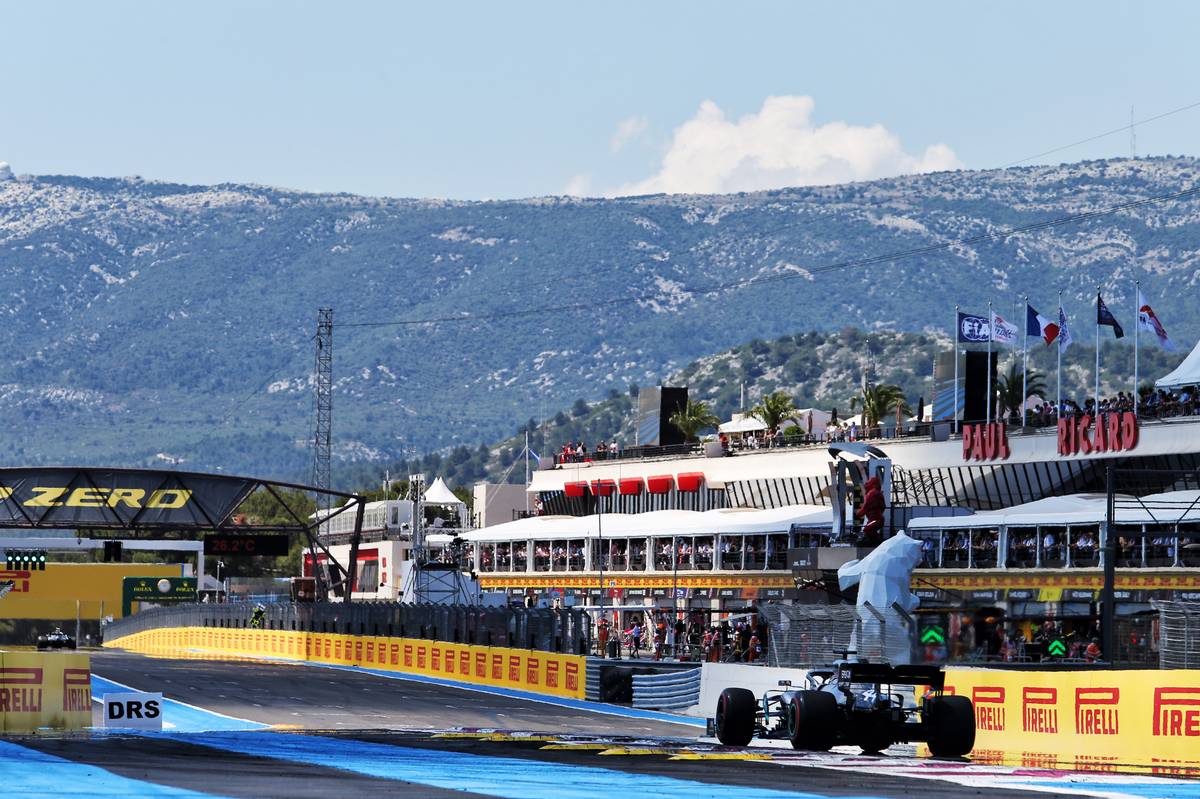 Despite the success of the mediums in Q2, everyone was back on the soft compound for Q3 - with the contrary exception of Gasly. Hamilton claimed first blood with a time of 1:28.448s, which was 0.157s faster than his team mate.

Leclerc was half a second back in third followed by Verstappen, Sainz, Norris, Ricciardo and Gasly, with Vettel aborting his first run after apparently missing an upshift and Giovinazzi also not setting a time, opting not to come out for a first run due to a shortfall in his remaining new tyre allocation.

Hamilton managed to find another tenth on his second run, while Bottas' follow-up effort was slightly lacking and failed to improve on his earlier best. There was bigger disappointment for Ferrari when Vettel's do-or-die final run yielded only seventh place, putting him just ahead of Ricciardo and almost a second and half slower than the Silver Arrows.

However the McLaren camp was delighted to see Norris improve his time and jump his team mate for fifth place, ending up only nine thousandths of a second behind Verstappen. 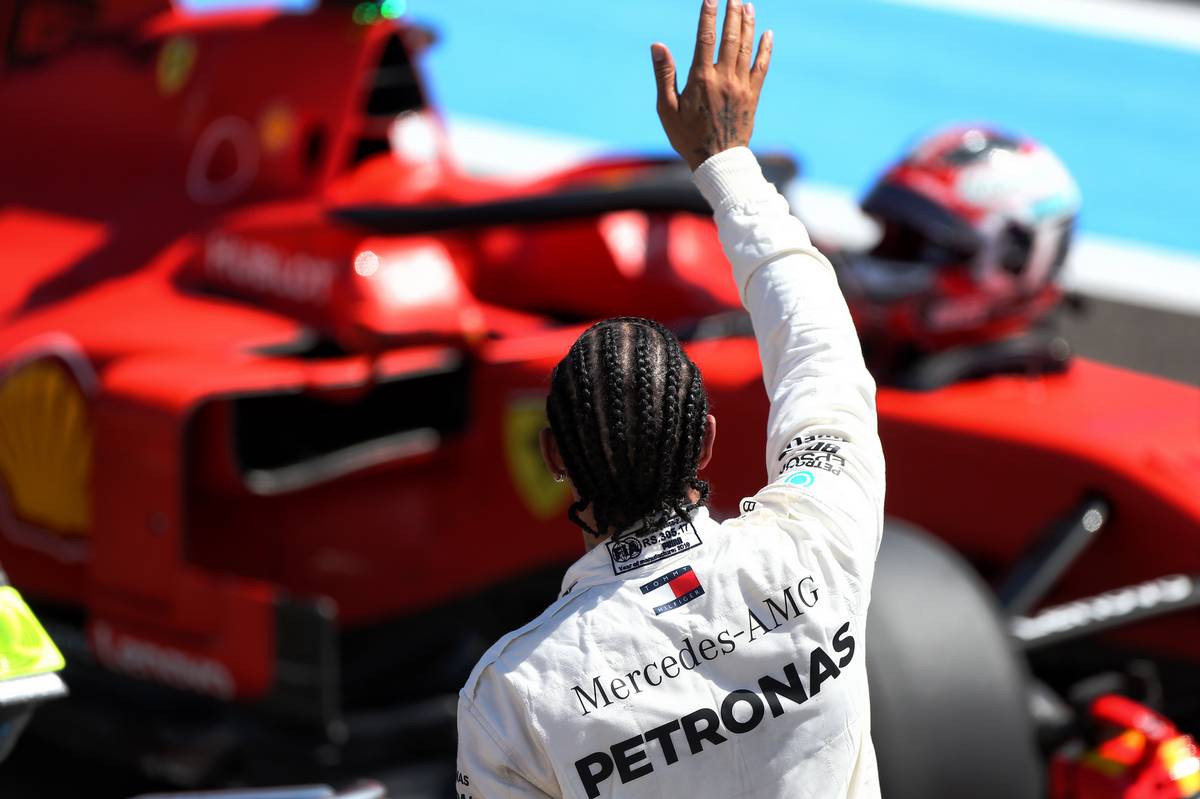