Sunday's German Grand Prix pivoted on a dramatic moment mid-race when Mercedes' Lewis Hamilton spun off the track in wet conditions on lap 29, and then suffered an agonisingly long pit stop for a new front wing.

Hamilton was in pit lane for 50 seconds, an eternity in F1 terms where stops are regularly completed in just two or three seconds.

"There was a lot of chaos when Lewis came in," Mercedes trackside engineering director Andrew Shovlin admitted in the team's regular Pure Pit Wall debriefing video. "It looked messy.

"We were in the pits ready for Valtteri," he explained. "He decided to stay out. At the same time, Lewis had gone off track, hit the wall, broke the front wing.

"He came in," Shovlin continued. "We could see that he was coming in, but it takes the guys a little while to get the different tyres out.

"Also we had this broken nose and we can’t lift the car on that to do the normal change with the jack. So, we had to get different kit out to do that.

"Then there was a change of driver on the tyre call, and we also changed the tyre spec from a soft to an intermediate tyre."

Hamilton had changed to the slicks just a lap before his spin, only for the rain to pick up again. "The conversation we were having with him was actually about the medium," Shovlin revealed.

"We thought it was going to get drier, that's what we were reading into the weather forecast and the medium was the only tyre we were comfortable taking to the end.

"Lewis was actually saying that the tyre is too hard, and that was why we put him on the soft tyre.

"We know now that we should've been having the conversation about going to the intermediate tyre, but at the time what we were discussing with Lewis was just medium or soft."

Having to change back to intermediates on the follow-up stop as well as replacing the front wing inevitably contributed to the confusion. 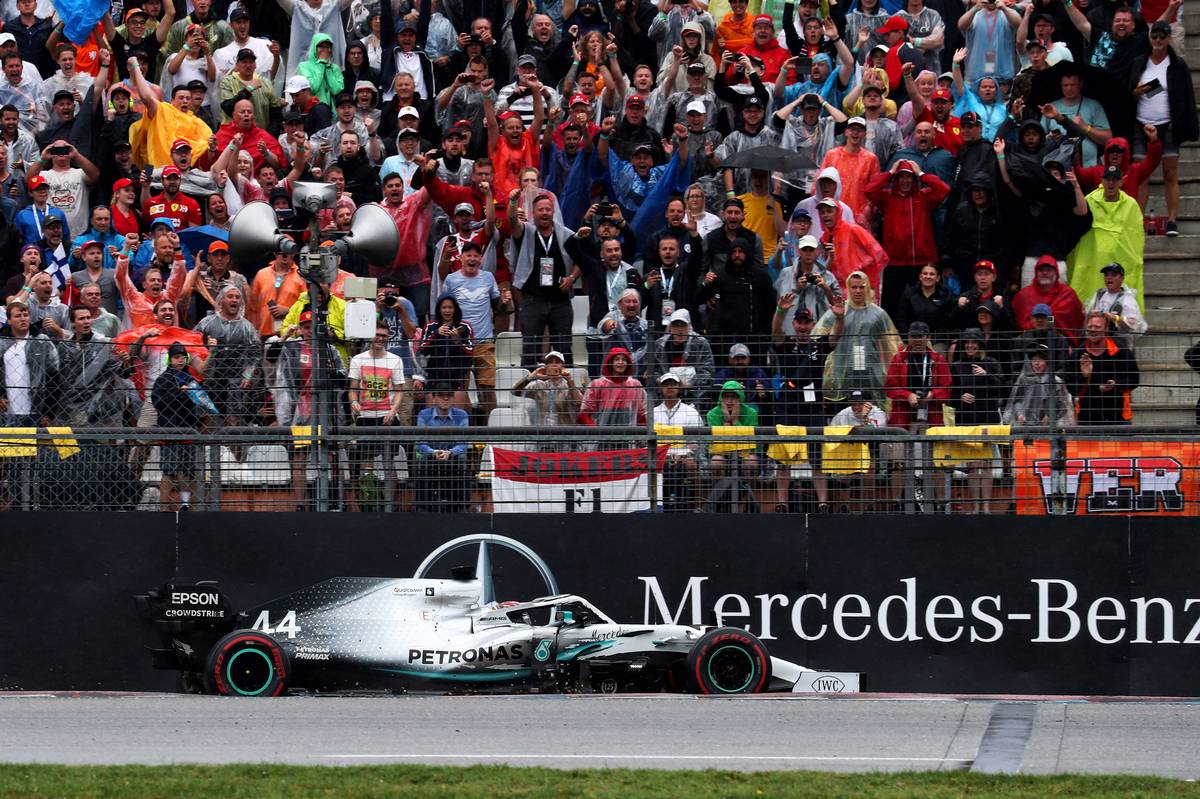 "Getting the communication through to the guys when everything is so chaotic is very difficult," Shovlin agreed. "It wasn’t pretty [but] the guys in the pits actually did a really good job reacting to that.

"We at least got the right tyres on the right car!

"Those situations are very difficult, and they are not rehearsed. They are not the ones we practice. But it does show us where we need to be stronger in the future."

Both Mercedes drivers lost places as a result of the confusion. Hamilton was also hit by a further five second penalty for not coming into pit lane the correct way.

A further spin meant that Hamilton finished the Grand Prix outside the top ten, but a subsequent post-race penalty saw him promoted two places into ninth place for which he picked up a couple of championship points.

That was better than his team mate Valtteri Bottas, who spun off the track in the first corner on lap 57 where Hamilton had also had a scare moments earlier.

"Both the cars spun in Turn 1 as you saw," Shovlin acknowledged. "There were two reasons.

"The balance was a little bit oversteery for the conditions. We obviously hadn't run in those cold, damp conditions during the weekend, we didn't get it quite right.

"But there was also the dry line and then a damp patch. With both of them, they just got a wheel on there, lost a lot of grip and it triggered it into the spin."

Villeneuve: Replacing Gasly with Kvyat 'not the way to go' for Red Bull