Mercedes' Lewis Hamilton took an emphatic victory in the Abu Dhabi Grand Prix, leading from lights to flag and never looking under serious threat all evening as he cruised his way to his 84th F1 career win.

Max Verstappen had plenty of complaints to make about the performance of his Red Bull but nonetheless held firm to see off a strong threat from Ferrari's Charles Leclerc, who is under review for a fuel discrepancy.

Valtteri Bottas recovered from a back row start to finish in fourth place ahead of Sebastian Vettel and Alexander Albon, in a race with only one retirement. 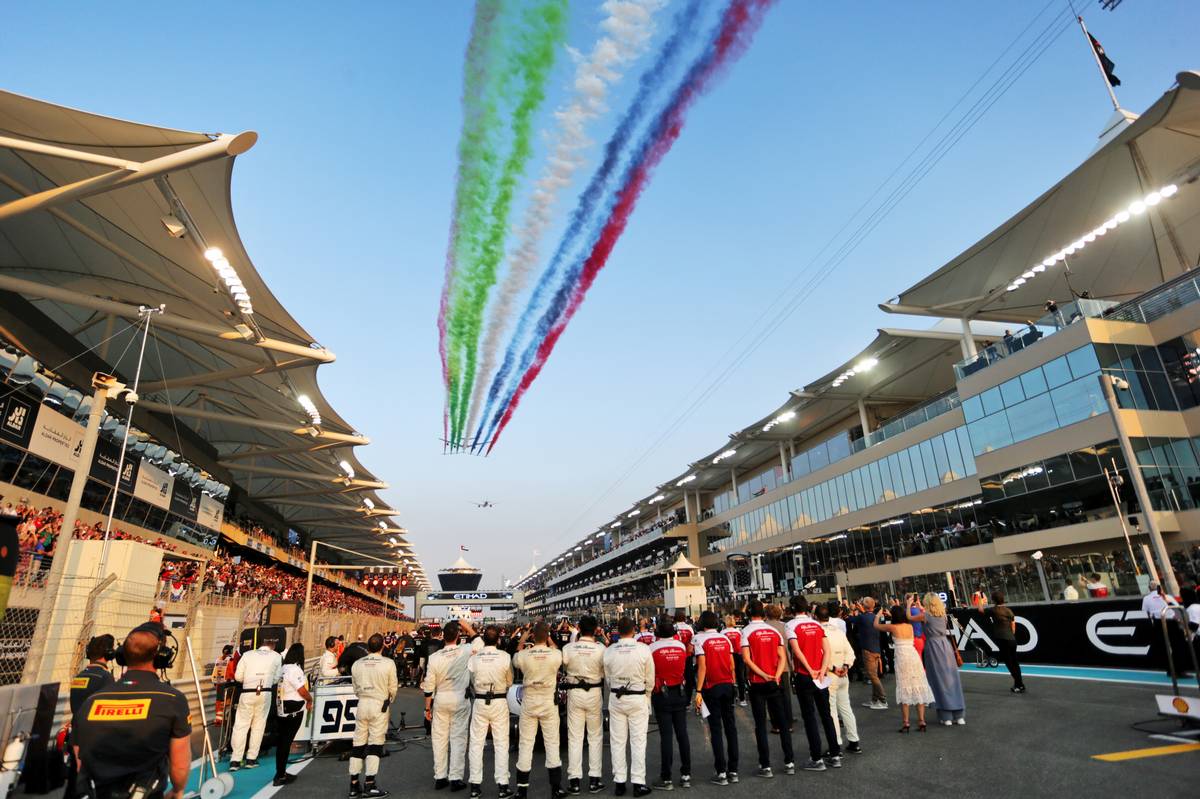 The sun was setting on the 2019 Formula 1 season as the cars took their places on the grid for one last time. Pole sitter Lewis Hamilton was alongside Red Bull's Max Verstappen on the front row at Yas Marina, ahead of an all-Ferrari line-up behind them comprised of Charles Leclerc and Sebastian Vettel. Someway back, engine penalties meant that Hamilton's Mercedes team mate Valtteri Bottas was starting from the back despite being second quickest in Saturday's qualifying session.

When the final race of the year got underway, Hamilton immediately leapt away into the lead, pulling out a 1.6s gap over the rest of the field in the opening lap alone. By contrast, Verstappen seemed to be struggling for pace and was unable to prevent Leclerc breezing past him at turn 8. Vettel also had a go on the Red Bull, but despite being the only one of the top four to have started on the faster soft compound he was unable to take the place; he had to settle for safeguarding his position by pulling away from Alexander Albon in fifth.

McLaren team mates Lando Norris and Carlos Sainz briefly clashed over sixth place, but both cars were good to continue having already contained the threat from the Renault cars of Daniel Ricciardo and Nico Hulkenberg behind them. Further back there had been contact between Pierre Gasly and the two Racing Point cars of Sergio Perez and Lance Stroll into turn 1, leaving the Toro Rosso with front wing damage. He lost time limping back to pit lane, and the repairs seemed to take an age before he was able to get back on track, by now already a lap down. 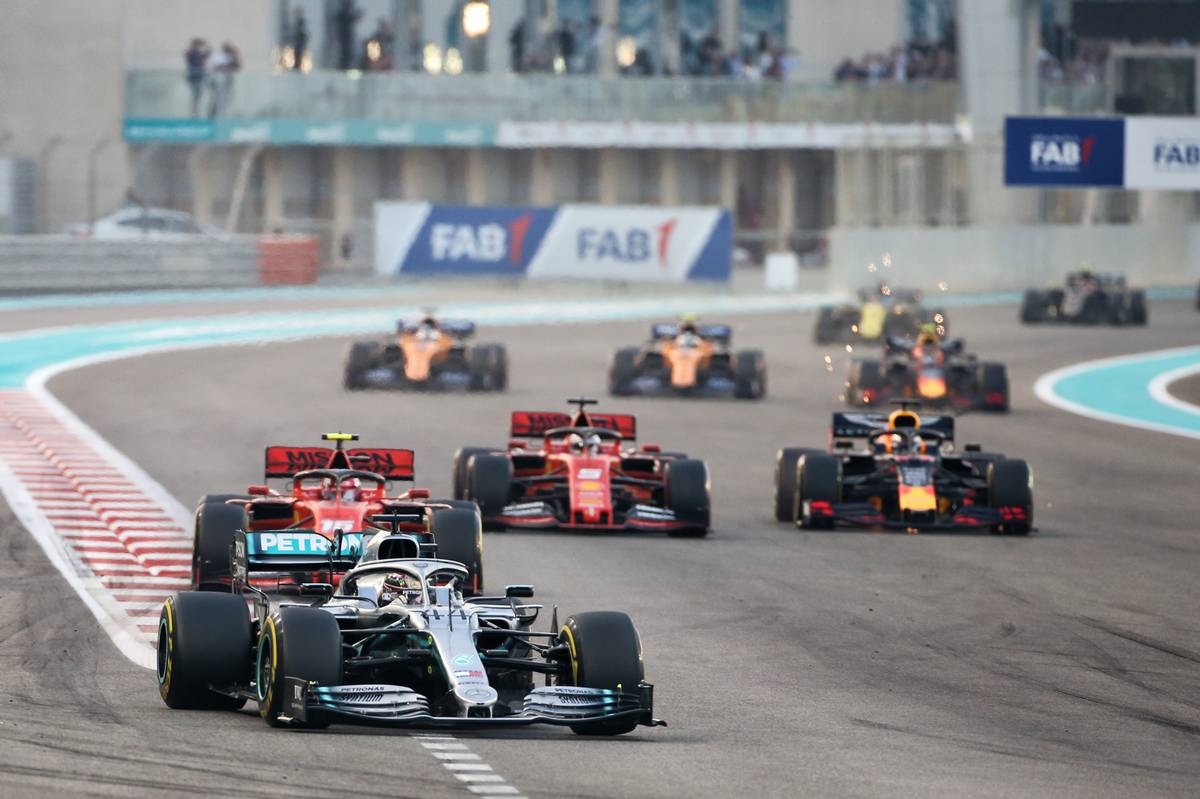 Despite DRS being temporarily disabled due to a technical issue, Bottas was up to 14th place by lap 4 as he set his sights on battling his way onto the podium despite his grid penalty. He then made up another place with a pass on Stroll through lap 5 on lap 5, and then dispatched Alfa Romeo's Antonio Giovinazzi and Haas' Kevin Magnussen in successive laps to put him on the cusp of the top ten.

Norris became the first of the front runners on soft tyres to pit at the end of lap 9, with Ricciardo in shortly after. Both selected the hard compound intending to make it to the end of the race, with Ricciardo rejoining in 15th place meaning he was still behind Norris. However he had managed to successfully pull off the undercut on Sainz when the Spaniard eventually pitted.

Ferrari called in both their cars on lap 13, but while things went smoothly for Leclerc who rejoined in fourth behind Albon, the double-stacking resulted in a much more troubled and significantly slower stop for Vettel. He had to scramble to make up the lost ground to ensure he stayed ahead of Albon when the Red Bull subsequently pitted on lap 14.

By lap 16, Hamilton and Verstappen continued to extend their lead and were still on their original set of mediums, with Leclerc now third ahead of Hulkenberg and Bottas up to fifth ahead of Vettel, Albon, Perez, Magnussen and Kimi Raikkonen who was also yet to make his stop. Bottas' progress had stalled and he was now under pressure from Vettel on fresher tyres, but the continuing lack of DRS made it difficult for the Ferrari to find a way past the Mercedes. 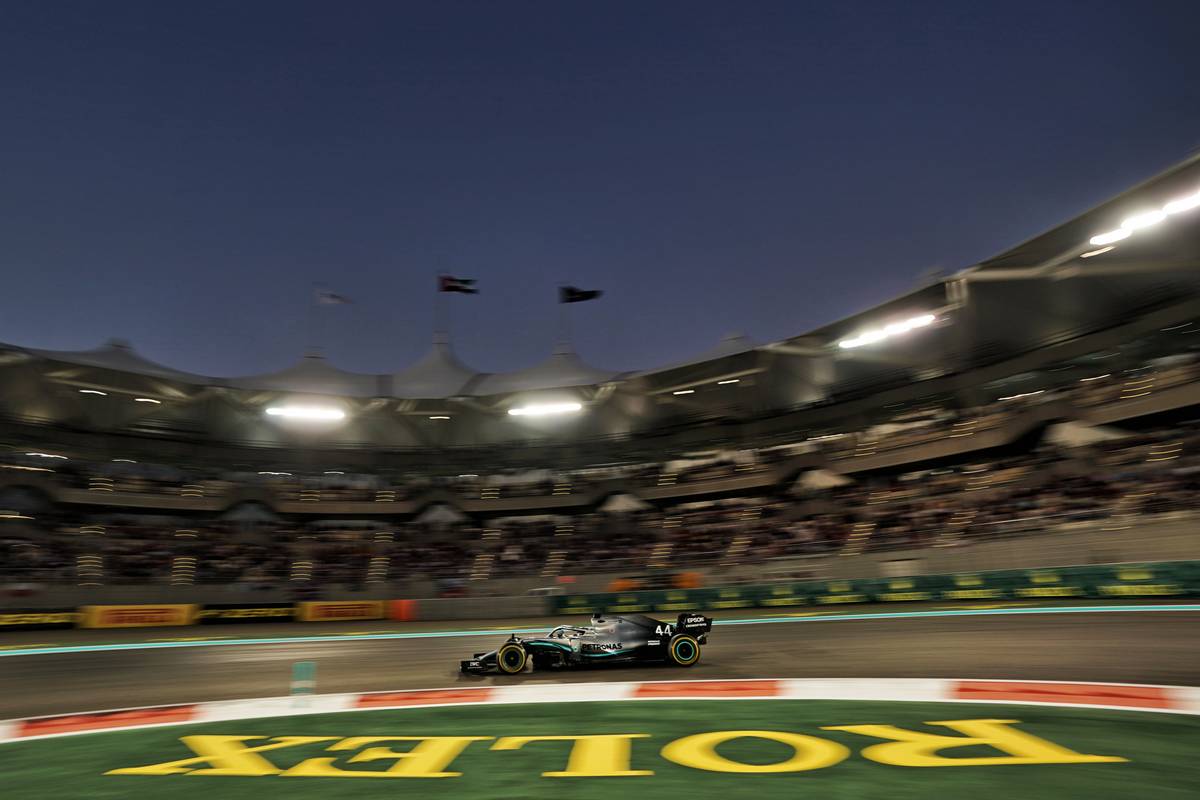 DRS was finally back up and running on lap 18, just as the last embers of daylight slid away from the skies and ceded lighting duties to the Yas Marina floodlights. Bottas immediately made good use of the system to pass Hulkenberg, who then briefly left the field of battle to pit for a set of medium tyres. He emerged behind the two McLarens, where he was soon putting the fresh rubber and a dab of DRS to good use to pass Sainz to put him back into 11th.

"The tyres are a bit more difficult now," reported Verstappen on lap 23, while Hamilton was growing concerned about the possibility of a safety car wiping out his ever-growing lead before he had a chance to make his one and only visit to the pits. Contact between Williams' Robert Kubica and Alfa Romeo's Antonio Giovinazzi had indeed scattered debris in turn 12 and briefly hinted at a possible caution of some kind, but the stewards reviewed the situation and saw no need to interrupt the proceedings for a clean-up - or to penalise either driver for the clash.

Verstappen finally pitted on lap 26 and lost second position to Leclerc as a result, but on the brighter side he was now on much fresher tyres than the Monegasque. Hamilton immediately responded next lap, a slightly sluggish stop by the Silver Arrows pit crew of little import given the size of his lead. That left Bottas to make his stop on lap 30, and this time the mechanics were warmed up and working at top speed to return the Finn to the fray in sixth place ahead of Perez, and soon successfully putting the screws on Albon for fifth.

Verstappen meanwhile was not a happy camper on his new set of hard tyres, telling the Red Bull pit wall that "Something is not correct!" and adding "I've got a massive handbrake effect as well ... How come this is suddenly a problem?" His race engineer told him that they were looking into it and that he had to "calm down" and refocus in the meantime, but he was soon back on the radio to complain that it was "still very poor". Despite Verstappen's increasingly plaintive pleas for help, it seemed that the Red Bull brain trust had no suggestions to help him. 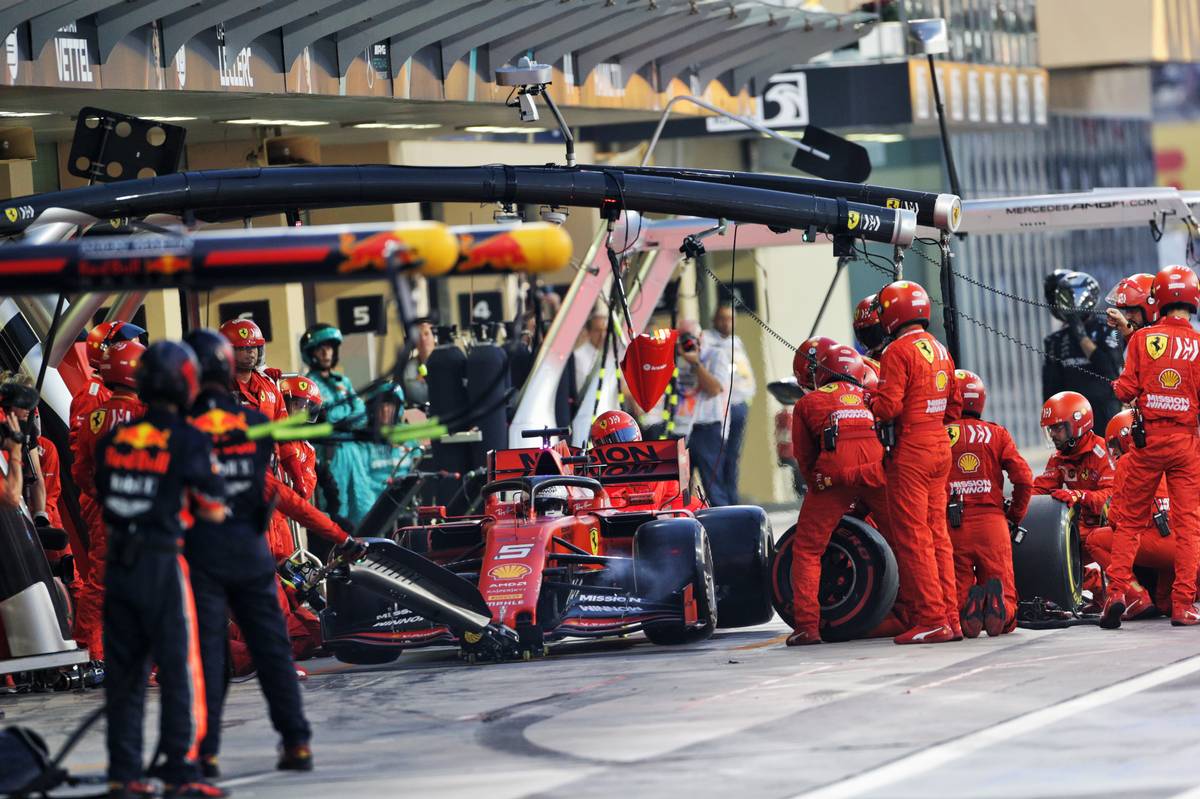 Even so, his raw pace was still looking good and on lap 32 he took advantage of a back marker getting in the way to make a successful lunge down the inside of Leclerc into turn 8. Leclerc responded immediately down the straight and launched a counterattack around the outside at turn 11 only to come off second best again. Despite this success, Verstappen was by no means appeased and was soon back on the team radio to complain about the RB15's throttle map. Meanwhile Leclerc was also in touch with his engineer demanding "Plan C, Plan C" as it was clear that his tyres weren't going to last long enough to keep him ahead of the likes of Bottas.

Leclerc's Plan C manifested as a second pit stop on lap 40 to switch to a set of softs for the final stint without losing third position. Vettel also came in for service a few seconds later but he opted for mediums, and the stop dropped him to sixth behind Bottas and Albon leaving him relying on the fresher rubber to help him recover the lost positions in the remaining 16 laps.

Hamilton was still in control of the race by 14s over Verstappen with Leclerc now 25s in arrears followed by Bottas, Albon, Vettel, Norris, Hulkenberg, Perez and Sainz who then made a precautionary second stop of the evening on lap 43 for new mediums which dropped him out of the top ten. His place in the points was taken by Daniil Kvyat, the Toro Rosso having just managed to complete a phenomenal 42 laps on its opening set of hard tyres. Sainz was soon on the move with a pass on Magnussen on lap 45. Seeing the direction the wind was blowing, Norris appealed to the team to follow Sainz' lead and made another stop of his own, but he was told by the McLaren pit wall that this wasn't an option for him and he would have to tough it out to the finish.

Hulkenberg was similarly struggling, losing places to Perez and Kvyat with seven laps to go. The difference in tyre wear was leading to increasingly desperate scraps elsewhere, with Vettel successfully passing Albon for fifth place on the penultimate lap of the season. Norris tried to hold on to seventh but finally succumbed to Perez on the final lap while Sainz clawed his way into the points with seconds to spare by passing the waning Hulkenberg which means he seals sixth place in the drivers standings. 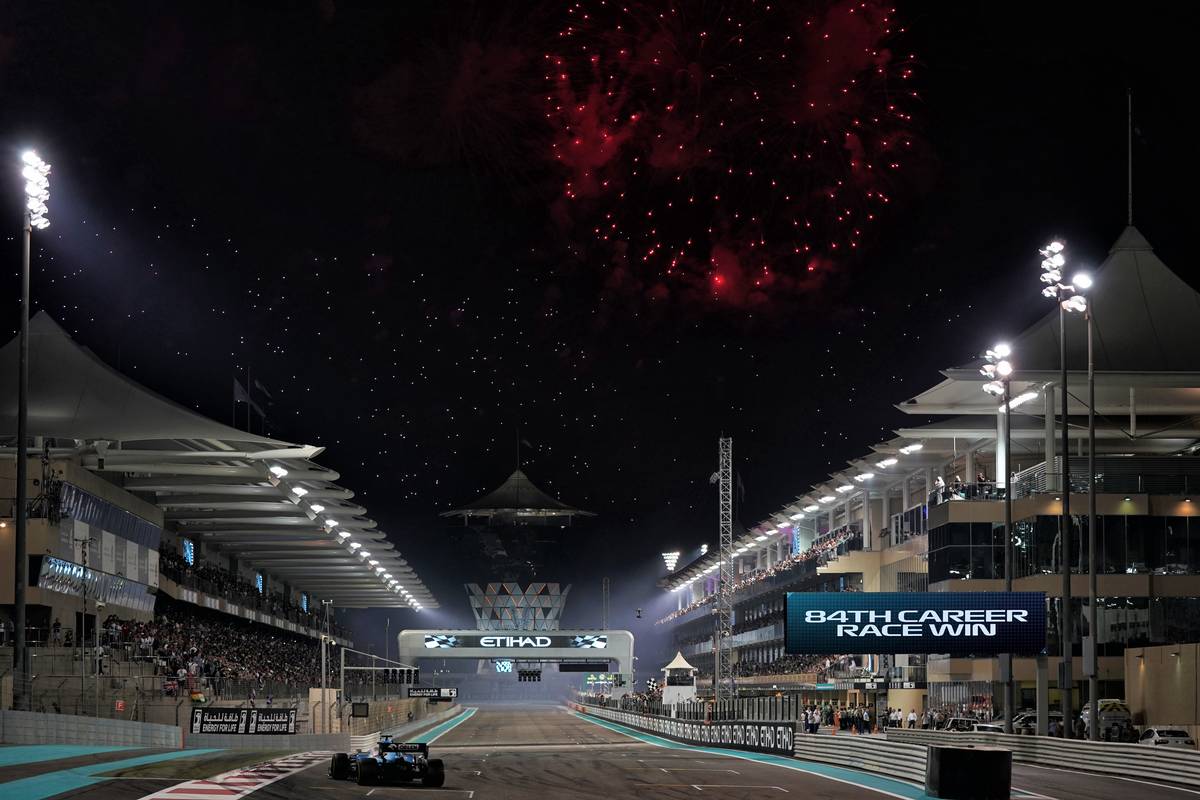 But there was no stopping Hamilton from clinching the chequered flag and celebrating with some vigorous donuts, having also clinched the bonus point for the fastest lap for good measure. Verstappen was second with Leclerc having held on to the final podium place subject to a post-race investigation for a fuel discrepancy detected just before the start.

Bottas had to settle for fourth after his back row start, followed by Vettel, Albon Perez, Norris, Kvyat and Sainz, with Ricciardo and Hulkenberg just missing out on the points. Kimi Raikkonen crossed the line in 13th ahead of the two Haas cars of Kevin Magnussen and Romain Grosjean, with Antonio Giovinazzi finishing ahead og George Russell, Pierre Gasly and Robert Kubica in his final race for Williams.

There was only one retirement in the race, with Lance Stroll pulling into the Racing Point garage with a technical issue with just seven laps remaining.