Formula E has announced that the opening round of its 2021 season, a double-header scheduled on January 16-17 at Santiago in Chile, has been postponed.

The all-electric series did not provide any details for why the event has been delayed, but it's likely the postponement was prompted by the current COVID-19 crisis, with Chile closing its borders to visitors originating from the UK where five FE teams - Mercedes, Envision Virgin Racing, Jaguar Racing, Mahindra Racing and NIO 333 - are based.

"On December 22, in consultation with the Santiago municipality, the decision was taken to postpone the Santiago E-Prix," Formula E stated on its website.

"The races will no longer take place as a double-header on January 16-17 and Formula E is working with the city to finalise dates on which to stage the races later in Q1 (first quarter) of 2021."

The FIA Formula E series' seventh season is set to unfold over 12 rounds this year, a schedule that includes three double-header weekends in Santiago, Diriyah and London.

Tuesday's news implies that the series will likely kick off its campaign at Diriyah in Saudi Arabia on February 26.

Ferrari in the process of setting up Haas base in Maranello 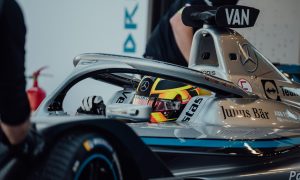