Sebastian Vettel's move to Aston Martin this year will open a new chapter in the German driver's career, but it will also provide the four-time world champion with the opportunity to finally experience the best power unit in F1.

Mercedes' V6 turbo engine has dominated the sport since the advent of the hybrid era in 2014, the manufacturer setting the bar at a level so far unmatched by its rivals, although Ferrari briefly surpassed Mercedes in 2019 albeit with the help of some fringe technical sorcery that was later outlawed by the FIA.

After a painful conclusion to his six-year spell with the Scuderia, Vettel will embark on a new and hopefully resurgent venture this season. And the 33-year-old is already raring to go.

"I can’t wait to start working with Aston Martin Cognizant Formula One™ Team," commented Vettel in the press release announcing Aston's partnership with US IT giant Cognizant.

"There’s so much for me to discover over the next few months and I’m incredibly determined to help make this team even more successful.

"Before we know it, we will be at the first race, seeing this famous name back where it belongs. I’m proud to be part of this journey."

And among Vettel's discoveries will be the Mercedes engine which he has never experienced.

"Of course, I’m mega-excited to see how it [Mercedes power] feels," he said, quoted by F1-Insider.

As he heads to Team Silverstone, Vettel will encounter a lot of new faces. But the 53-time Grand Prix winner will also bring along to Aston Martin two long-standing members of his inner team: personal trainer Antti Kontsas and his press officer Britta Roeske

"So far, that’s a lot of new faces for me there, of course, but I’m optimistic that it will work out," he told F1-Insider.

"You always have to be open to new things. I’ll meet a lot of new people, new ways of working, new approaches – and I wouldn’t be well advised to think that only my way is the right way."

However, his new team's environment likely won't see him shake a few old habits, like giving a female name to his car.

"I think I’ll do it," he admitted. "I already have an idea. In any case, it has to be a name that fits Aston Martin." 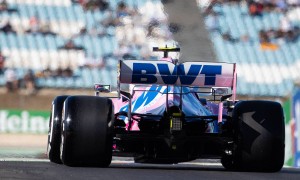