Red Bull's Max Verstappen kept a firm grip of the lead of Saturday's sprint race at the Red Bull Ring, confirming that he will start tomorrow's Austrian Grand Prix at the front of the field.

Charles Leclerc will once again line up beside him on the front row after a surprisingly vicious battle with his Ferrari team mate Carlos Sainz. George Russell also maintained fourth at the chequered flag.

The big winner was Sergio Perez who recovered all but one of the positions he lost in the stewards room after Friday's qualifying. But Sebastian Vettel retired with car damage, Zhou Guanyu lost out when his Alfa Romeo cut out before the formation lap, and Fernando Alonso's Alpine was unable to take the start.

As the cars made the way to the grid for the start of the 24-lap sprint race, the second of 2022 after Imola, the weather continued to smile benevolently upon the Red Bull Ring in Spielberg with clear skies and sunshine. It was 21C air temperature and 34C track temperature with zero chance of rain, the only blemish being heavy winds in turn 3 that were causing some headaches for the drivers. All the top ten starters were on the medium compound, with Max Verstappen on the front row alongside Charles Leclerc followed by Carlos Sainz and George Russell on row two.

As the cars pulled away on the formation lap, Fernando Alonso was left behind with the Alpine up on the jacks and the tyre blankets still on. The team returned to wheel him back into pit lane but the problem was obviously more than just a case of poor time keeping, but rather an issue starting the car which meant he was out of the race. Eighth place on the grid remained empty as the rest of the field returned to take up their respective places, and this time it was Zhou Guanyu who sent up distress signals telling the pit wall "everything just switched off", causing the rest of the field to be ushered off on a second formation lap. The Alfa Romeo did finally get going, but now had to start the race from the pit lane. 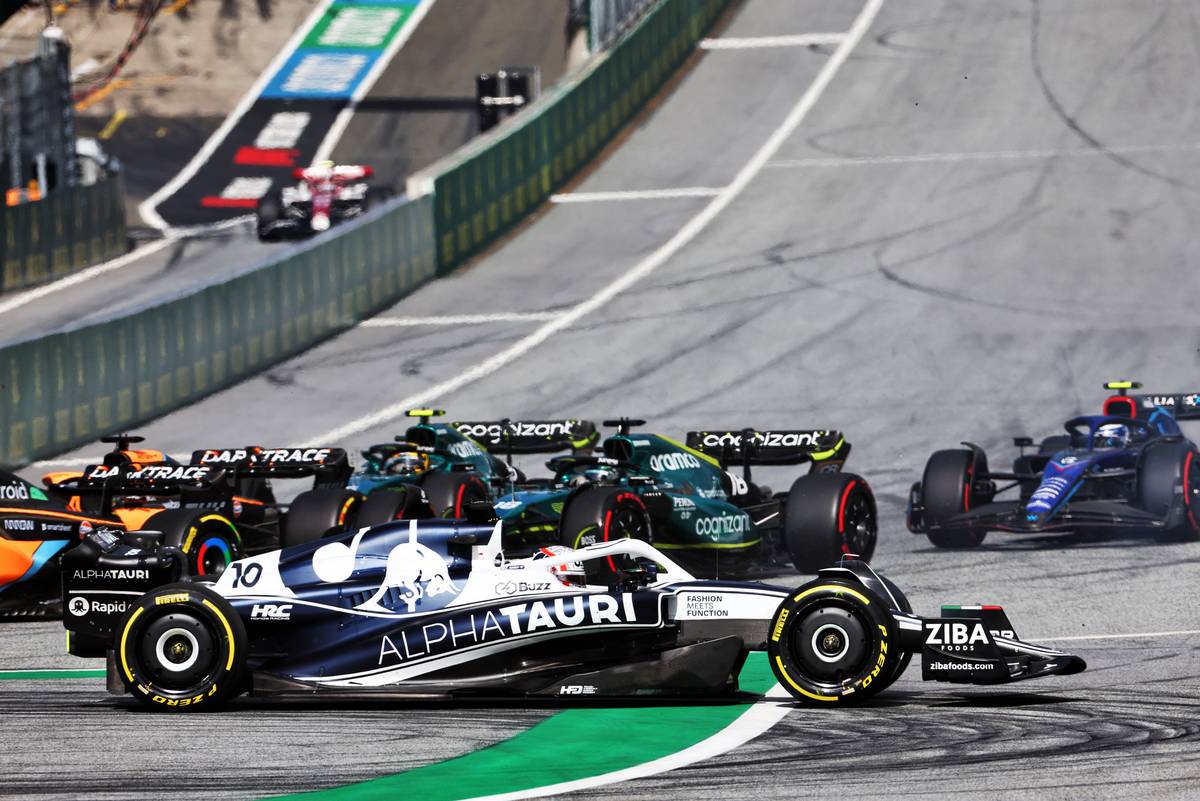 Third time lucky, and when the lights went out Verstappen successfully squeezed the Ferraris and maintained the lead into turn 1. A slower launch for Leclerc briefly dropped him down behind the faster-starting Sainz but the Monegasque soon won a fierce battle with his team mate to snatch second place back. Behind this scrap, Russell held on to fourth from Esteban Ocon, Kevin Magnussen and Mick Schumacher with Sergio Perez having benefitted from some midfield commotion to regain five of the nine positions the stewards had taken from him after the end of qualifying.

The midfield commotion had been sparked by Pierre Gasly wondering drifting left across the track and pinching Lewis Hamilton. The contact briefly lifted the AlphaTauri into the air and cost both men positions. Hamilton had survived unscathed and was soon moving back past Alex Albon at turn 1. Lando Norris also had DRS and tried to follow suit only to be forced off at turn 3 by the Williams before he could complete the pass, leaving him under pressure from his McLaren team mate Daniel Ricciardo. 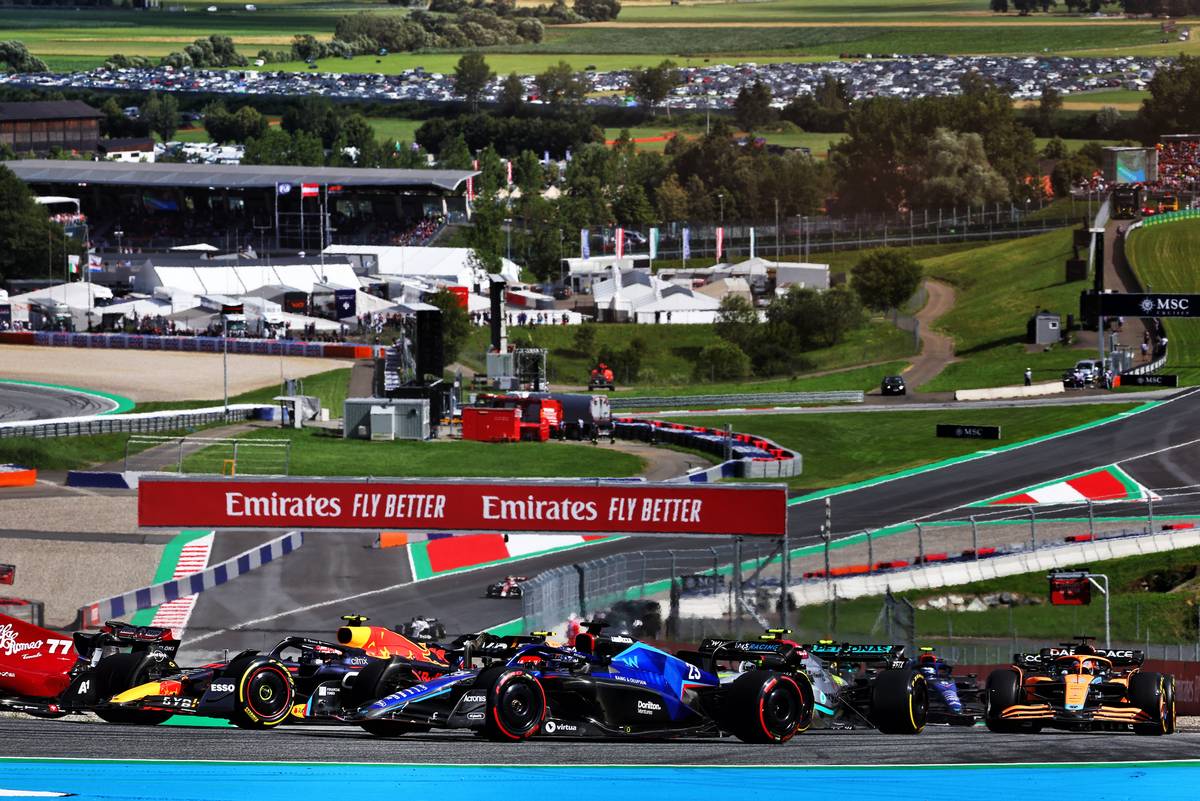 Eight laps into the race, Verstappen had pulled away from the Ferraris who were having a genuine sustained fight for second which was helping the Red Bull to escape. Russell was unable to match the pace of the top three but was safe from attack from Ocon, Magnussen and Schumacher, with Perez frustrated by the two surprisingly swift Haas cars. Hamilton was back up to ninth having picked off Bottas, with Norris and Ricciardo running in formation just outside the top ten.

Perez finally dived down the inside of Schumacher on lap 9, and a lap later he pulled off a beautiful move to make it into sixth place. Next on Perez's hit list was Ocon. who was duly dispatched on lap 12 to take fifth. Meanwhile Hamilton was being continually thwarted by the two Haas cars and remained stuck in ninth, showing a significant shortfall of straight line speed compared to Schumacher ahead. "The car in front of me has been off at least four times," he complained over the Mercedes team radio. 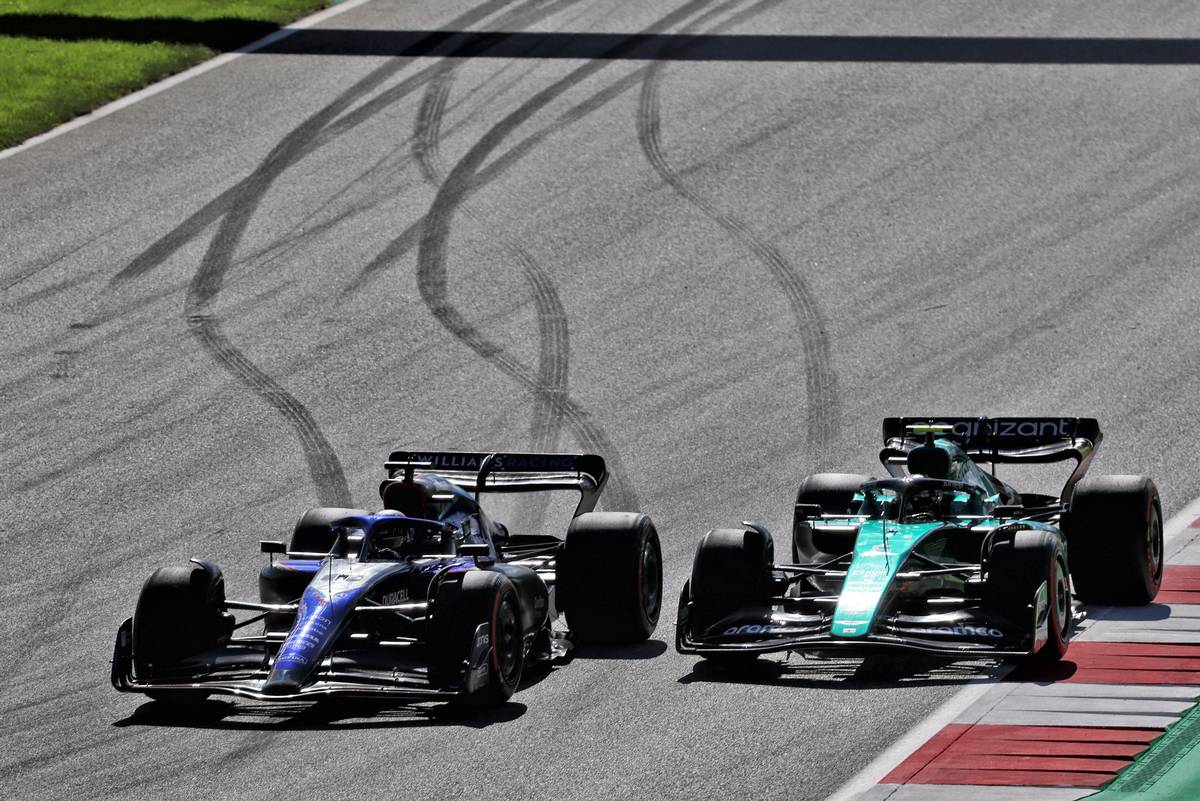 Meanwhile, having been handed a five second penalty for forcing Norris off track at the start of the race, Albon was in the wars again on lap 11 when he banged wheels with Sebastian Vettel. It sent the Aston Martin into the gravel at turn 6 and by the time he extracted himself, Vettel found himself dead last and ultimately retired just before the end of the race with car damage.

The situation at the front had stabilised, with Verstappen, Leclerc, Sainz and Russell now settling for the positions in which they had started the race, and Perez out of time to catch the Mercedes to improve on fifth. Ocon was ten seconds behind the Red Bull with the two Haas cars closing up on hims, and Hamilton still labouring to get past Schumacher - which he finally managed at turn 4, with two laps to go, snatching a disappointing eighth ahead of Schumacher and Bottas. 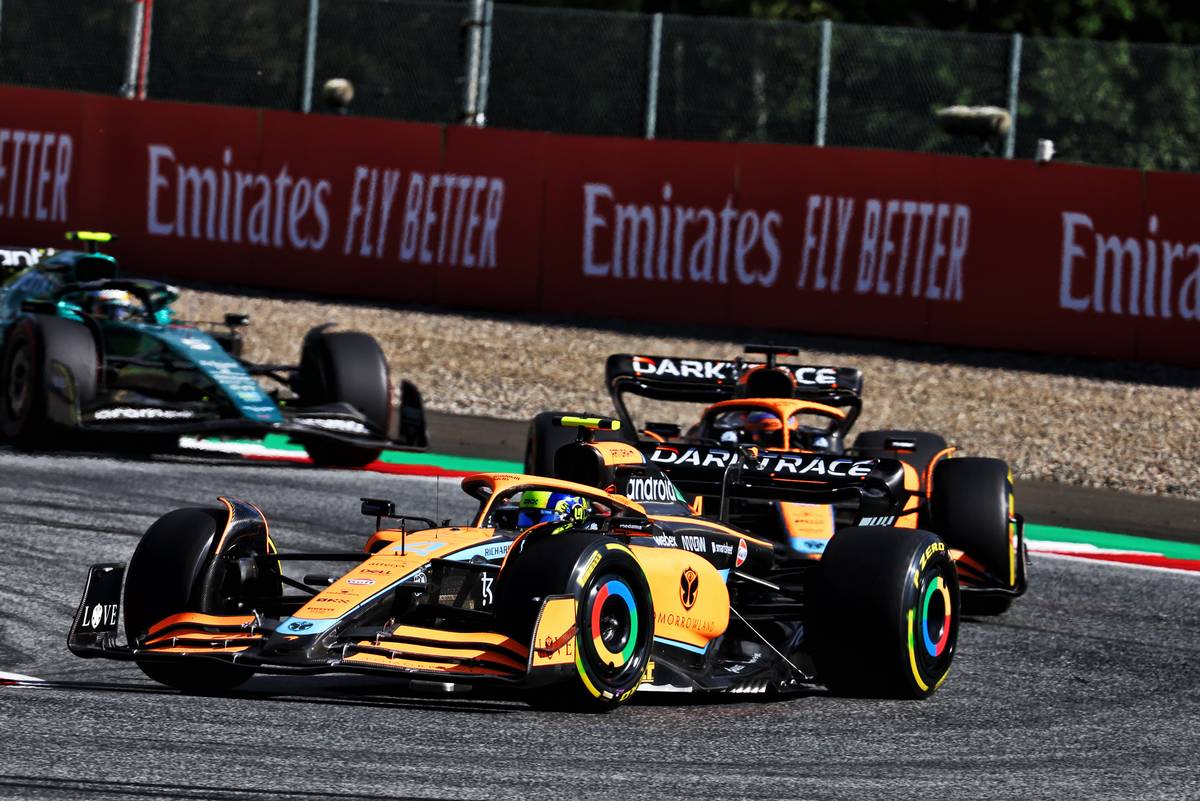 Norris and Ricciardo had been unable to break through and crossed the line in 11h and 12th respectively followed by Lance Stroll, the highest-placed of the four cars that had started on soft tyres. Zhou was 14th from Gasly, with Albon classified in 16th after his time penalty was applied leaving him ahead of Tsunoda and Latifi, with Vettel retiring and Alonso failing to take the start.

That will be the order that the field starts the Austrian Grand Prix in a little under 24 hours on Sunday afternoon.