Max Verstappen became the youngest winner in F1 history with victory on his Red Bull debut after the Mercedes drivers collided at the start of the Spanish Grand Prix.

While the opening lap saw the drama of Lewis Hamilton and Nico Rosberg colliding, the incident set the race up perfectly between Ferrari and Red Bull. Entering the final ten laps any one of four drivers could have won, but it was Verstappen who held off Kimi Raikkonen to take a stunning victory.

Verstappen was only promoted in place of Daniil Kvyat ahead of this weekend, and he delivered a drive of complete maturity to make a two-stop strategy work and hold off Raikkonen in a straight fight for the final 32 laps of the race. Winning at the age of just 18 years and 227 days saw Verstappen smash Sebastian Vettel's record by three years.

Daniel Ricciardo had led the first half of the race and was racing Vettel on a three-stop strategy, closing in on the Ferrari as both caught the leading pair. Ricciardo had the freshest tyres and took a lunge at Turn 1 with seven laps remaining, causing Vettel to jump out the way of the Red Bull and retaking third place on the exit. The fight allowed the leading pair to edge away further, with Raikkonen shadowing Verstappen but never making a clear move.

The enthralling strategic battle was for the race win courtesy of drama on the first lap, with the two Mercedes drivers colliding. Rosberg took the lead with a good move around the outside of Turn 1 on the opening lap, with Hamilton looking to fight back on the approach to Turn 4. Rosberg moved to the inside to defend and Hamilton swerved to the right which left him on the grass. The defending champion lost control on the grass and slid sideways into Rosberg at Turn 4, wiping both cars out.

The safety car was required to clear the two Mercedes cars away, with Ricciardo leading Verstappen and Carlos Sainz at the restart. Sainz was soon cleared by the two Ferraris, with Vettel leading the chase and closing in on Verstappen.

The leading quartet all stopped within four laps of each other at the end of the first stint to switch from soft tyres to mediums, but Red Bull retained the upper hand with track position. In the second stint, Ricciardo and Vettel both switched back to the softs while Verstappen ran six laps longer than his team-mate and Raikkonen a further lap, with both staying on the harder medium tyre.

Vettel pit for a third time to take on the medium tyre with 29 laps remaining, while Ricciardo ran for a further six laps and had the advantage of fresher tyres but was fourth on the road and had ground to make up. It soon became apparent Verstappen and Raikkonen would have to try and go to the end, and the tyres held on to allow the 18 year old to become the first Dutch F1 winner in history.

Ricciardo had tried to pass Vettel on two occasions in the closing stint but failed to pull it off and then suffered a puncture on the penultimate lap, pitting and rejoining just ahead of Valtteri Bottas who finished fifth. Carlos Sainz was an impressive sixth in his home race, though his achievement will be overshadowed by Verstappen's drive.

Sergio Perez came home seventh, just holding off Felipe Massa, while Jenson Button and Daniil Kvyat rounded out the top ten. Kvyat was fast on soft tyres late on and even passed Ricciardo on track to unlap himself but was comfortably adrift of Sainz.

Fernando Alonso should have made it two Spanish drivers in the top ten but he was forced to retire with a loss of power when chasing down Button. Esteban Gutierrez finished 11th after running in the top ten for much of the race, with the Mexican banging wheels with Haas team-mate Romain Grosjean at Turn 5. Grosjean had a disappointing race and struggled for pace after the first stint before retiring with 10 laps remaining.

Nico Hulkenberg was the other driver to retire, having to pull of the track with flames coming from the rear of his Force India.

The Mercedes collision saw neither driver score and Raikkonen moves second in the drivers' championship on 63 points, though still 37 adrift of Rosberg. Vettel also moves up to fourth, level on points with Ricciardo on 48 points but ahead courtesy of his second place in China.

While Mercedes will deal with the fallout of the Hamilton and Rosberg crash, Red Bull is left to reflect on a dream debut in the team for one of the most exciting young talents F1 has ever seen.

AS IT HAPPENED: Spanish Grand Prix 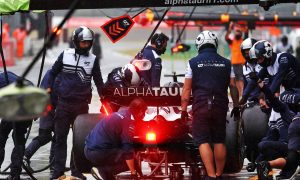 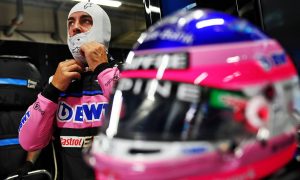