The Italian Grand Prix is set to remain at Monza until 2019 after confirmation of an impending new contract on Friday afternoon.

Bernie Ecclestone and race organisers held a press conference at the Autodromo Nazionale di Monza on Friday where it was confirmed the race will remain on the calendar for the next three years. Monza's future had been uncertain while negotiations with Ecclestone were ongoing, with this year's race having been the last on its current deal.

Imola had been touted as a possible alternative location for the race, but Automobile Club d'Italia (ACI) president Angelo Sticchi Damiani confirmed to F1i earlier this year that government legislation only allowed additional funding if the race was held at Monza.

Ecclestone says the contracts have yet to be formally signed but says a three-year deal is agreed.

"We're getting all the small details that are important in a contract together and we'll sign this," Ecclestone said. "So there's no problem with having a race here at all. It will be here. The contract is only going to be for three years but hopefully we're here for another hundred years."

The Italian Grand Prix has been an ever-present on the F1 calendar and has been held at Monza for every year except 1980, when it was held at Imola. 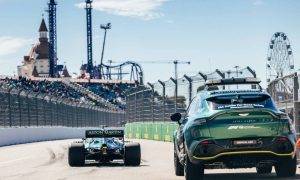