Hamilton made a poor start from pole position to drop to sixth on the opening lap and Rosberg was able to ease away from the two Ferraris at the front of the field. With the Mercedes pair starting on the soft compound tyre compared to supersofts for many around them, Hamilton was held up by Valtteri Bottas and dropped 15s behind his team-mate in the opening stint.

Sebastian Vettel and Kimi Raikkonen both opted to two-stop - running the opening two stints on the supersoft tyre before switching to the soft - while the Mercedes pair one-stopped by finishing the race on medium tyres, ensuring Hamilton had little in the way of an on-track fight once he had cleared Bottas.

Rosberg managed his pace to ensure Hamilton never closed at any great speed and eventually won by 15 seconds. Vettel came home third for Ferrari ahead of Raikkonen, with the pair separated by 6.5s at the line.

The result was a crucial one for Ferrari as it closed the gap to Red Bull in the constructors' championship to 11 points, with Daniel Ricciardo taking fifth place from Bottas late in the race.

Hamilton was slow away at the start and saw Rosberg and the Ferraris stream past, having to file in behind Bottas and Ricciardo at the opening chicane. The championship leader's start was not the worst, however, with Esteban Gutierrez bogging down from 10th place and dropping to the back of the field by the first corner.

While Hamilton dispatched Ricciardo around the outside of Curva Grande at the start of lap two, just behind him there was a collision between Jolyon Palmer and Felipe Nasr as the Sauber squeezed the Renault off the road on the exit of the first chicane. Nasr was penalised with a 10-second time penalty for the incident and both cars retired as a result, although Nasr did return to the track simply to serve his penalty.

Any hopes Hamilton had of recovering through the field were dashed as it took him until lap 10 to get the better of Bottas. The Williams was quick in a straight line and Hamilton had been waiting for the supersoft tyres to go off on the cars ahead of him but eventually made a move using DRS. By then, he was 12 seconds off the lead and his victory chances were all but over.

While Rosberg could manage his soft tyres for a spell, Ferrari opted for supersofts for its second stint which ensured Hamilton would jump both on his one-stop strategy without having to pass on track. The gap between the Mercedes pair extended out to 15 seconds and although Hamilton was within 10 at one stage, Rosberg had the race under control and cruised to his 21st career victory.

With the Ferraris no threat and circulating over five seconds apart, the closest race was between Ricciardo and Bottas as the Red Bull was on supersofts and the Williams on softs. Ricciardo had the pace and ability to look after his tyres, launching a move up the inside from a long way back at Turn 1 with six laps remaining and easing away to take fifth.

A lap later, Verstappen dived up the inside of Perez at the second chicane - Della Roggia - with the Force India taking to the escape road. The move ensured Force India scored just five points as Hulkenberg came home tenth, with Williams regaining fourth in the constructors' championship as a result of picking up ten points.

Alongside Palmer and Nasr, Pascal Wehrlein retired when he was told to stop his car on the exit of the first chicane, while Daniil Kvyat also failed to finish after being given a penalty for speeding in the pit lane. 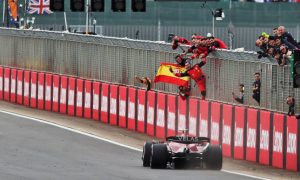 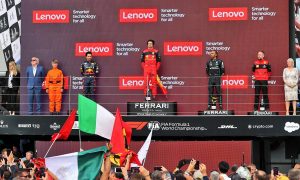