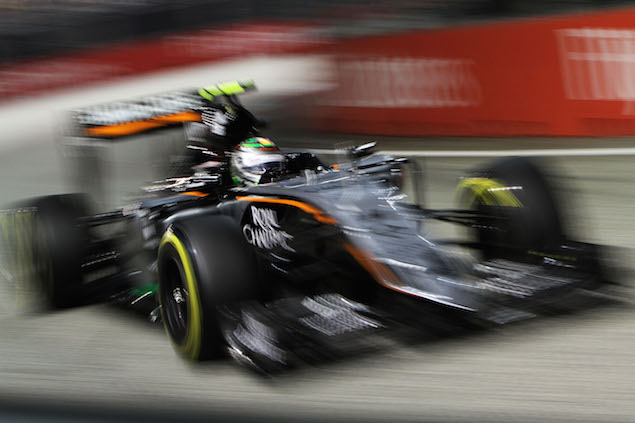 Sergio Perez: “It’s a good feeling to end such a demanding race with seventh place and six points. The start was very important because I knew I had to get ahead of Fernando [Alonso] and I also jumped ahead of Romain [Grosjean]. After that I managed to keep up a good rhythm and I had new tyres immediately after the first safety car so I concentrated on looking after them and building a gap to the cars behind. The second safety car didn’t help us because it gave the Toro Rossos a big advantage with their fresh tyres. We knew they were catching us quickly and it was tough to stay ahead because my tyres were getting old and it wasn’t easy to keep the car away from the walls. So the last 15 laps of the race were very demanding but fortunately we could hold on for seventh.”

Nico Hulkenberg: “That’s a really frustrating way to end my race. I was feeling confident with the car; I had made my first stop and I was in good shape. The accident with Felipe [Massa] was very unlucky and I don’t understand why I’ve been given a penalty before there has even been the chance to discuss the incident in the stewards’ room. I saw Felipe coming out of the pit exit as I went through turn one, but I was ahead in turn three, I was on the racing line and I took the corner as usual. Then I felt the contact with my left rear and my race was over. In my view it was my corner and I’m surprised Felipe backed out of it much too late, locking up just before he hit me.”

Vijay Mallya, Team Principal & Managing Director: “Another bittersweet race in which we weren't able to get the reward the pace of both drivers should have warranted. Checo was brilliant: he was smooth in attacking and didn't put a wheel wrong when defending. The ending of the race was a bit nerve-wracking, with Checo coming under intense pressure from Verstappen, but he was able to play on the strengths of his car and didn't allow for any overtaking opportunity to arise. Nico had excellent pace but he didn't get the chance to show it. He was ahead of Felipe coming into the corner, took the line he was expected to take and yet Felipe didn't back out until it was too late. We are surprised a penalty was given to Nico, especially considering that he was the one who ended up out of the race and with severe damage to the car. We’re even more surprised the drivers weren't called to the stewards' room to give their view on the events. In any case, tonight's result strengthens our fifth position in the championship. We managed to increase our advantage over the teams behind us and we will aim to continue in this fashion next weekend in Japan.”