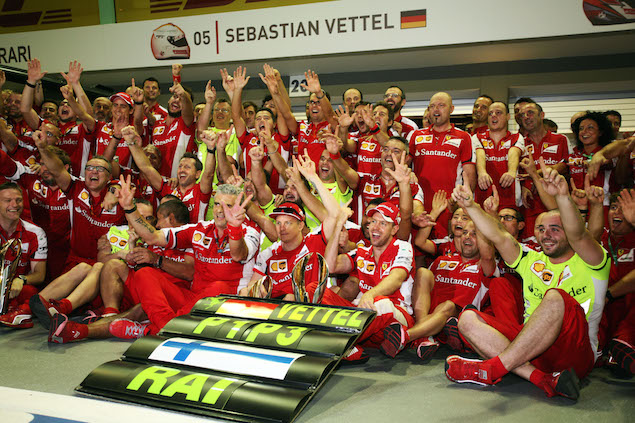 Sebastian Vettel: “It was an incredible race today, in fact all in all an incredible weekend and it is difficult for me now to sum it up. The race was intense and long, I had some pressure from Daniel behind me, we were the quickest two cars out there today, but I was able to control the pace and look after the tyres, which ran ok for the whole weeekend. The car felt fantastic, I could control the gap until the end. Today we are in paradise, but we know we’re still a long way to go. It has been a surprise that Mercedes hasn’t been on the pace this weekend, we don’t know why, but to be honest we don’t really care. I am very happy for the team today, there has been a lot of work going in since the day I joined in. For the next races we will keep pushing 100 percent, we’ll give our maximum, like always. As long as there is a chance we have to go for it, we have to do everything we can. Mercedes are the ones to beat, the best way to do it is looking after ourselves and doing the best we can.”

Kimi Raikkonen: “I have mixed feelings: I’m happy to be third, considering how difficult it was yesterday, struggling with the grip and the handling of the car, but I’m a bit disappointed for not having been able to fight for a better position. Today I knew it was not going to be easy: it was a tricky race, on new tires I was able to follow Daniel easily, but then I was starting to have the same problems as yesterday, and I did not have enough speed for trying to catch him. First and third is a great result for the whole team, but of course it could have been better. It’s hard to predict how is going to be in the next races , but I don’t think we should get carried away. Obviously some tracks fit you better that others: we’ll do our best as usual. Hopefully we’ll find out that we can be competitive again fighting at the front. We have done an amazing job as a team so far, we keep improving, building and learning a lot in all areas, we are going in the right direction.”

Maurizio Arrivabene, team principal: “This is a fantastic win! It’s fantastic for Seb, who yesterday put in an awesome qualifying lap, something which reminded me of the great champions of the past. But this result is also fantastic for the whole team, for all the guys here in the Singapore garage, and also for those who work back at Maranello. Kimi’s third place today clearly shows how important and effective was the development work we carried out on our car. Today we have both drivers on the podium and we’re happy with that. And yet, I was not sure that we could make it until we crossed the finish line. A race win is something you build step by step, from the start onwards: and on a track like this, full of unpredictables, and with two safety car periods, the real problem was keeping concentration. Now I don’t want to make predictions for the championship: there are still may points at stake, and obviously we’ll do all that’s in our power to stay in front. But always with great humility and a huge respect for other contenders.”

Sergio Marchionne, Ferrari chairman: “Congratulations to everyone involved in this fantastic victory. Sebastian Vettel drove like a real champion today and everyone on the team, both on the track and back home in Maranello, did an absolutely perfect job. I’m also delighted for Kimi Raikkonen. It is wonderful to see him back on the podium too. It has been too long since two Ferrari drivers were in the first three across the line.

“This was a major victory on a difficult circuit and I’d like to dedicate it to all our tifosi who have been so steadfast in their affection and support. On behalf of everyone in Ferrari, I promise them this race is not just a one-off but a huge step forward on our road back to staying at the top and hearing the Italian national anthem played a lot more often.”