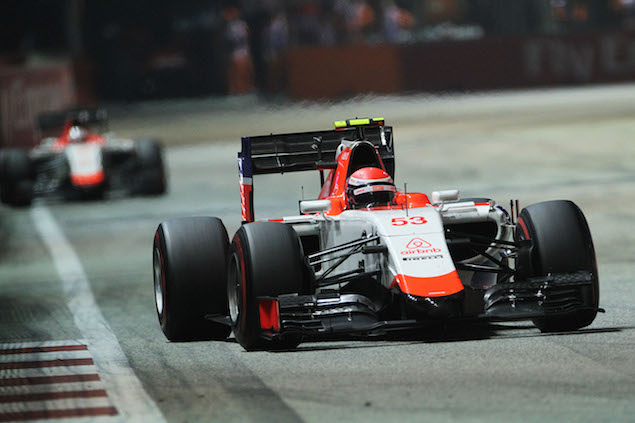 John Booth, Team Principal: “I’d like to start by congratulating the whole team on an incredible job here in Singapore this week, culminating in our second best combined race result and our ninth two-car finish of the season. This is not an easy environment for any team member to operate in, and that’s before we add a new driver into the mix. Our trackside operation this week has been incredibly slick and particularly creditworthy were the substantial repairs required on both cars in the field on Friday; cars which, today, enabled both drivers to take the chequered flag. As we saw, this was not the case with some teams further up the field. The drivers did an excellent job in what was a tough race, Alexander coping admirably with the pressure of his F1 debut. He delivered a solid and confident performance, whilst also having to contend with having no radio communications in the second half of the race, which was tricky because of the instructions we needed to give him during the second Safety Car period. Will also did a good job, but was battling rear tyre degradation for the final stint and did well to finish the race on that set. All in all, a very positive outcome at the first of the fly-away races.”

Alexander Rossi: “My Formula 1 debut has been a long time coming, but today has been pretty special. All the hard work to get here finally paid off and it was a fantastic feeling to be racing on the streets of Singapore in my first ever Grand Prix. It wasn’t the most straightforward of races; I didn’t get the best of starts, and as the procedure is quite new to me, it’s something I’ll need to work on. I recovered quite well though and managed to get a good run into Turn 5, where I was able to get past my team-mate. Everything was going well until around the midpoint of the race, when I lost radio communications. This was particularly challenging because of the second Safety Car period and I wasn’t able to receive instructions from the team about when to unlap myself. Despite that, I think we managed everything well and I’m very appreciative of all the effort put in by the team to make my Grand Prix debut a successful one.”

Will Stevens: “Overall, it hasn’t been a good weekend for me. Today I actually had my best race start of the season, but unfortunately I made a mistake on the first lap, which cost me position. The safety car helped out, and I tried my best whenever I was close enough, but there was too much tyre degradation on the rears towards the end. It’s a big shame, because I’ve really enjoyed racing on the streets here, but sometimes things just don’t go your way. Hopefully the next time out at Suzuka will be a more typical race for me.”