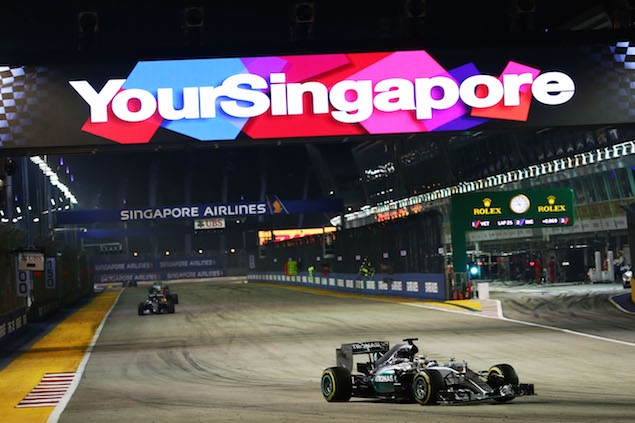 Nico Rosberg: “Singapore was a disappointing weekend for my team. We were far off the pace the whole weekend and Lewis' car had to retire. So I really hope that these were unique circumstances and our car didn't suit the track and conditions. The problem is that we don't really understand why Red Bull and Ferrari were so much quicker here. The start of the race was a bit chaotic. In the installation laps my engine went off a few times, so I couldn't do the same start procedure, which I practised 100 times. I had to adapt but it worked out okay, so I was able to keep the positions. P4 was the maximum today, so we have a lot of work to do for Suzuka to understand what went wrong.”

Lewis Hamilton: “The race was going very well. For me it felt like I was driving at my best in the race. I think I had the pace to win. I did everything. I was on the prime keeping up easily with the guys at the front on the option. My pace was really good when I started to lose power. I felt like the team was working as hard as they could and these kinds of things just happen. It's unfortunate for the team as I was feeling real good out there, so optimistic. But it was better to retire and save the engine. We will work really hard on figuring out what it was but I am not worried about losing this engine. Our reliability is really high as we had an amazing season so far. It's still a long way to go and I know I lost some points today, but I was fast and on form and I will make sure I bring that out to Suzuka to fight back!”

Toto Wolff, Head of Mercedes-Benz Motorsport: “I think that is what's termed a character-building weekend. Given our pace and the way the race unfolded, P4 was the maximum we could expect today with Nico. On Lewis' side, we tried everything we could to resolve the loss of power while he was out on track but there was nothing we could do and we retired the car when that became clear. He lost valuable points today. Ever since we put the car on track on Friday morning, we were on the back foot and it only improved a little today. There were times in the race when the pace looked okay but the guys in front were managing their tyres, too, so we must be realistic about our level of performance at this circuit. Now we need to analyse everything precisely, understand the wrong turn that we took this weekend to learn the right lessons - and then close this chapter. One bad weekend doesn't overshadow our achievements so far this year but we know that there is no room for complacency after a weekend like this. We will aim to hit back strongly next weekend in Suzuka.”

Paddy Lowe, Executive Director (Technical): “We clearly did not put ourselves in the strongest position during qualifying yesterday, starting from the third row, and it proved to be a long and painful race. It was a case of damage limitation for Nico who salvaged P4 today and didn't put a foot wrong. For Lewis, he suffered a technical problem that meant he was not getting full power, and we couldn't solve that while he was out on track. It was difficult to understand the pace during the race because the leading cars were controlling strongly their pace to make a two-stop strategy work. All attempts to find something different with the strategy that could have given us an opportunity were thwarted by the two Safety Car periods, which fell into a perfect two-stop window. We will do our analysis to understand the problems we faced this weekend, and then aim to bounce back strongly in Japan.”