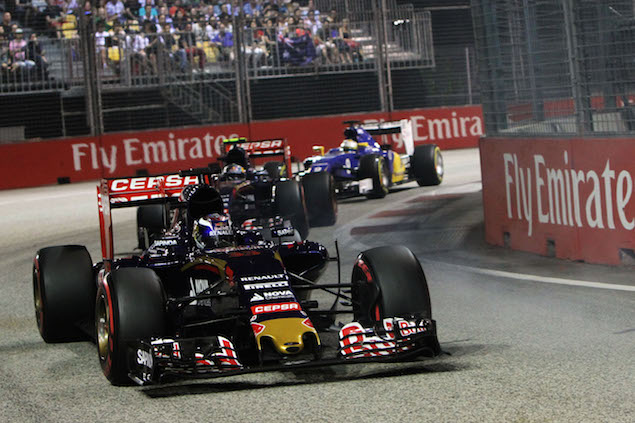 Max Verstappen: “It was an amazing race, I enjoyed it a lot! After stalling at the start I thought it was over, as I was pushed to the pit-lane and then re-joined the race one lap behind… But I just kept on pushing and to finish P8 is just fantastic! My pace was great and once again I really enjoyed all the overtaking! I don’t think there was any reason for me to give up my position after going from being one lap behind to being back in the points, I think I deserved that P8.”

Carlos Sainz: “It was certainly an eventful race! I had a good start, some very good pace at the beginning and the strategy was looking great. Suddenly, during the restart of the race after the first Safety Car, my gearbox went into neutral and I found myself at the back of the field. Then I started to overtake and have a lot of fun, climbing back up to P9, behind Max, who was pushing Perez. After seeing him try to overtake him for 10 laps, I just thought maybe I could try during one lap, and if I hadn’t been able to I would’ve given the position back to Max. I just wanted my chance, but he decided not to give it to me. It’s something we need to talk about as a team, but overall I have to say that I’m very happy to have finished in the points again! Let’s keep on pushing, the next race in Japan is only seven days away!”

Franz Tost (Team Principal): “The beginning of the race was quite a big shock, as Max stalled the engine and could not start the race from his well-deserved P8 on the grid. We have to find out what happened, because the anti-stall should have prevented this from happening. We were lucky with the Safety Car, and Max was able to catch-up after being a lap down. He drove a fantastically, with his lap times within the top five throughout the whole race. Towards the end he was fighting with Perez for P7, but unfortunately he wasn’t able to overtake him. Nevertheless, his eight position, under the circumstances of his race, is a success. Carlos struggled a bit at the beginning because after yesterday’s crash in qualifying, he was forced to start from P14. After the Safety Car, he had a short technical issue, going into neutral, which we also need to investigate to understand why it happened. He lost a lot of positions because of this. At the end of the race, we thought that Carlos would catch Max faster, because he had new Option tyres on, while Max had fitted used Options. Therefore, we calculated that Carlos could’ve had a better chance to attack Perez, but he didn’t close the gap to Max well enough to really demonstrate that he could do this, so there was no reason to end up swapping their positions. I must say that the performance from the car and the drivers was really fantastic and the new upgrades worked well. I’d like to congratulate the Aero department for their great job back at the factory, because here at the track we’ve confirmed that all their calculations were actually valid. The Vehicle Performance group has also worked very well, because we really have a competitive car, which makes me confident we can also do a good job next week in Suzuka – I look forward to it!”

Cedrik Staudohar (Renault Sport F1 track support leader): “Overall it was a very good race and weekend, although we could have achieved a better result without the stall on the grid from Max. The engines worked perfectly all weekend and the crew did a great job trackside to ensure we had no issues. Let's continue in this form to ensure more good results for the team in the forthcoming races.”