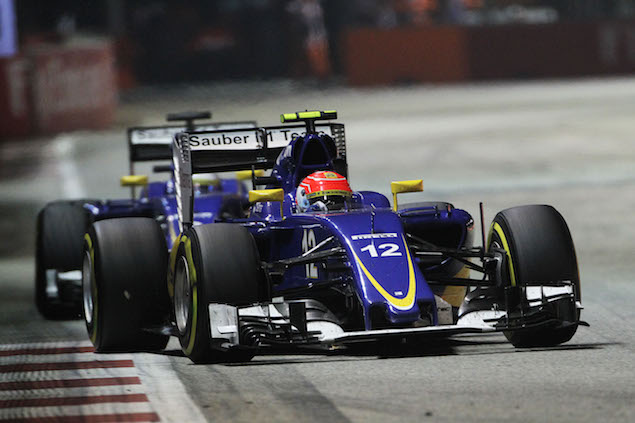 Marcus Ericsson: “I was satisfied with my start, as well as my first lap. I managed to get Jenson (Button) with a good move. After that, I was pushing Felipe (Nasr) quite hard, but it is difficult to overtake on this track. However, after the first pit stop we unfortunately missed switching off the pit stop buttons on the steering wheel. I was then out on track with the brake balance for the pit stop procedure, which caused a massive lock up at the rear. That was unlucky. After that, I had quite a satisfying pace. Overall it is nice that Felipe scored one point, but for me it is a bit disappointing.”

Felipe Nasr: “It was a very challenging race for us today. We had planned a two-stopp-strategy, and we knew it would be difficult to make it into the points. It was going well as I was up in the top ten after the first safety car phase. Unfortunately, when the second safety car came in I lost front tyre temperatures. When the re-start happened my pace was not good enough. I lost a lot of ground and had to wait to let the tyres recover. However, in the end I am very happy for the team and also for myself to have scored one point. We did not have an easy weekend. It is good to have finished the race with some satisfaction.”

Monisha Kaltenborn, Team Principal: “Considering the results, it was a positive end to a race weekend during which we have made mistakes. Besides of that, we also had bad luck during the second safety car phase. The drivers did their best until the very end. The whole team showed a good performance in the heat of the Singapore night, and this point is well-deserved.”