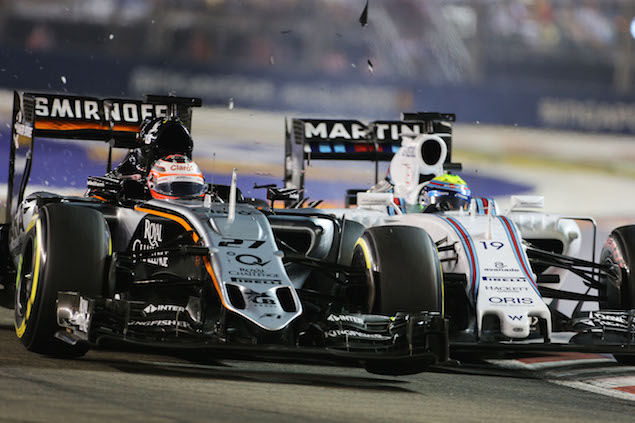 Rob Smedley, Head of Performance Engineering: “It was an excellent race for Valtteri today. He showed great pace and the gap from qualifying disappeared, so we were fighting with Kvyat and Rosberg throughout the race. We made good strategic calls, when Kvyat pitted we stayed out knowing a safety car could come at any time, and we got ahead of him. Felipe getting tangled up with Hulkenberg, who subsequently received a penalty, was unfortunate and put us on the back foot with that car. His retirement was a gearbox problem, the car was jumping out of gear so we need to investigate that. I'm happy with the day but it's tinged with disappointment because we've lost some points with Felipe's car.”

Valtteri Bottas: “It was a good race for me. The start was good, the pace was a little bit better than we expected. I could put a bit of pressure on the guys in front and undercut some people. The pit crew did an amazing job today under pressure. We did what we had to, got our heads down and took our opportunities. This was the maximum result today so I’m pleased.”

Felipe Massa: “It was a very unlucky race for me. My problems started with the collision I had with Hulkenberg after my first stop. I was braking for the corner and he turned his car in on mine, leaving me with nowhere to go, so we hit. This caused a slow puncture on my front-right tyre and the extra pitstop put me back many positions. I then had a gearbox problem. I was changing gears from 2nd to 3rd and was getting neutral. It seemed to resolve itself but it happened again and I had to retire the car. It was one of those races where things just weren't going my way. We need to concentrate on recovering some of our lost points at the next race.”

AS IT HAPPENED: Singapore Grand Prix