In his latest technical review, F1i’s Nicolas Carpentiers provides you with exclusive images and explanations about the novelties spotted over the Azerbaijan Grand Prix weekend, starting with a closer look at the headrest that denied Lewis Hamilton a shot at winning the race in Baku.

Lewis Hamilton was leading the race when he received a call to pit so his mechanics could fix the headrest of his Mercedes W08 after the device had started to come loose at the rear. This meant the triple world champion had to hold it while doing 300kph on the main straight with only one hand on the steering wheel.

The team has looked into what went wrong: “The pins that attach the headrest did not click into the socket, Niki Lauda told newspaper Osterreich. This was worsened by the heavy load caused by the air at high speed. We will do a redesign so that this does not happen again.”

The headrest is attached to the monocoque with two clips at the front (which the driver can release with a buckle, see yellow arrow on the image below) and a pair of rivets at the back (see white arrows). 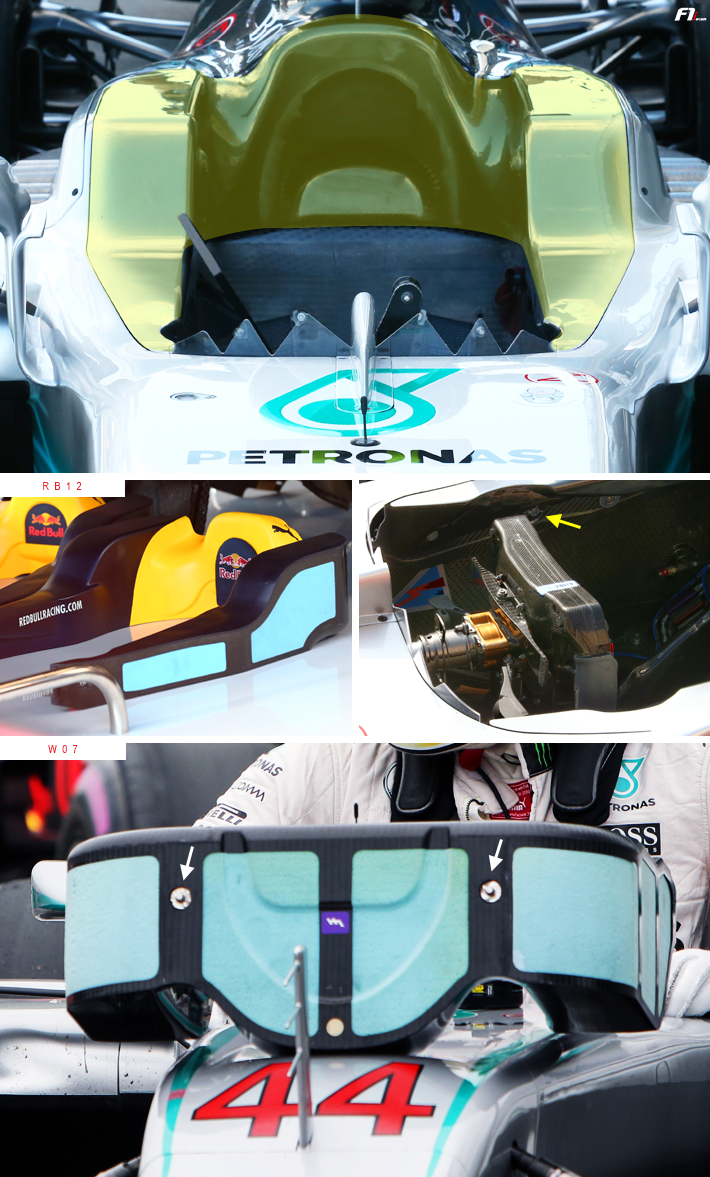 It’s not the first time that the head protection device unexpectedly comes loose on a Formula 1 car. One will remember that Kevin Magnussen’s headrest flew off his car, which is not supposed to happen, when the then Renault driver crashed at the top of Eau Rouge during last year’s Belgian Grand Prix.

Article 14.6 of the technical regulations mandate “three areas of padding for the driver’s head which are so arranged […] that they can be removed from the car as one part”. The headrest’s dimensions, material and protection area are also defined in the rulebook.

The FIA has called for the use of the CONFORM shock absorption foam manufactured by Aearo Technologies. With the degree of absorption varying depending on the ambient temperature, F1’s governing body informs teams about the foam they need to incorporate in the headrest: the blue spec when it’s above 30˚C – see image of the 2016-spec Mercedes W07 above –; the pink option when it’s cooler.