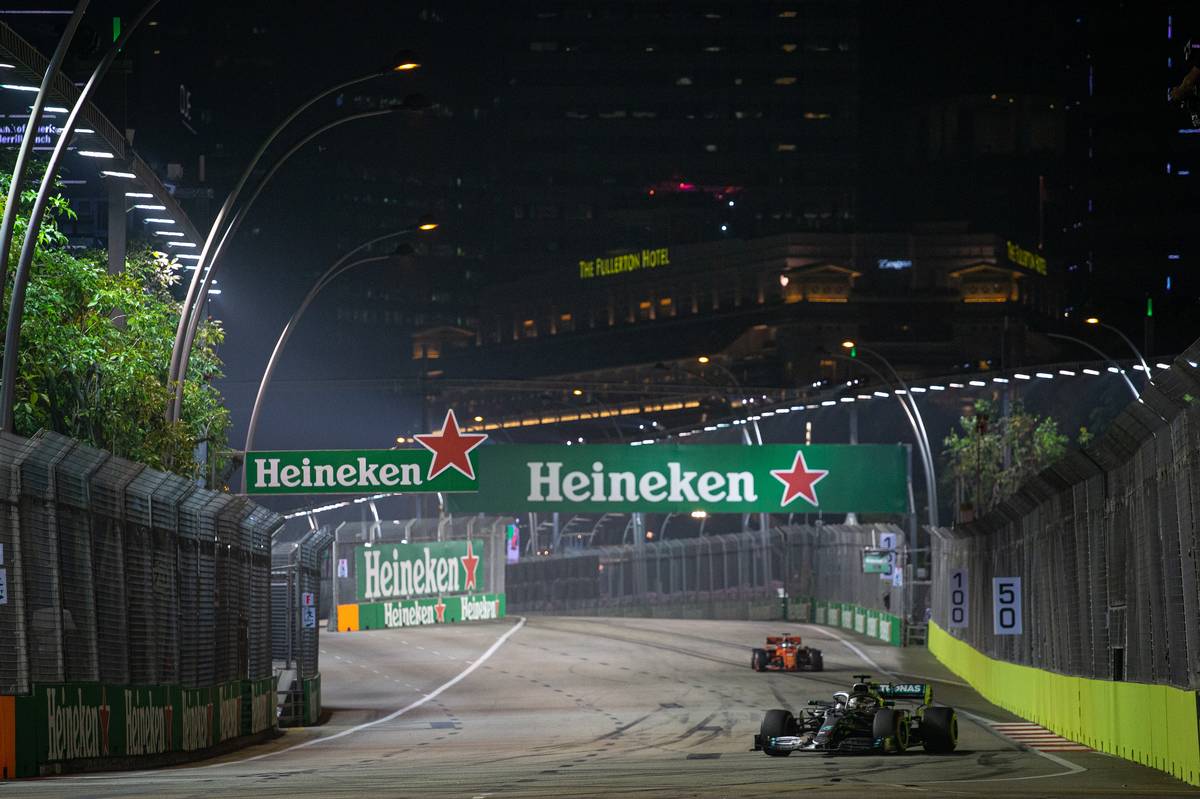 Valtteri Bottas
"I was hoping for some action today, but there wasn't really a whole lot, so the race felt a bit like a long Sunday drive, just without air conditioning. We tried to create some opportunities by offsetting our tyres to the cars in front and maybe get a chance to attack at the end of the race, but it didn't work out. The car felt quick today, but you need a pace delta of almost two seconds to overtake in Singapore, so we couldn't really attack the cars ahead. We have rules of engagement for our pit stops as we don't want to use them to swap position between our cars. The car ahead always gets the priority; so if the car behind stops early and undercuts, we will make sure that the other car still ends up in front. We can't be happy with our results this weekend, so we will analyse and review everything diligently as there's a lot that we can learn from qualifying and the race. We're going to Sochi next, a track that I'm usually strong at, but there are also very long straights, so we expect Ferrari to be quick again. It won't be easy, but I'm looking forward to the chance to fight again next week."

Lewis Hamilton
"It's not been the weekend we wanted at all. I was all over Charles in the first stint and I think we had the pace to win the race today. We discussed the possibility of the undercut in the strategy meeting this morning and I wanted to take the risk but then Ferrari decided to box, so we did the opposite and I stayed out. I pushed hard and the tyres were feeling good, but after a few laps they started to drop off real quick. We made mistakes tonight, but in this team, we win and we lose together. We don't point the finger at people, that's always been our philosophy and that won't change because of one race. We're fighting a Ferrari team who are super hungry and pushing very hard. It's on each one of us to do a better job. I believe we're the best team, but we've got to push on. We'll debrief tonight, put our heads back in the scrum, and then come back fighting at the next race."

Toto Wolff, head of Mercedes-Benz motorsport
"It's been a disappointing weekend for us and a lot of the issues in the race today were created by our qualifying yesterday. But we also didn't do a good enough job today and we can't be satisfied with P4 and P5. The undercut was more powerful than everyone expected and it would have been the right strategy call for us. Once we had missed the chance for the undercut, we were hoping to create some opportunity later in the race by offsetting our tyres, but that plan didn't work. I think we had a car capable for pole yesterday and we had an opportunity to win today, but we made too many mistakes. We're aware that we didn't deliver to the standards that we set ourselves this weekend, so we will review it and see where we can improve for Russia. These tough days are the days that make us stronger. Sochi with its long straights will be a tricky race for us, so we need to make sure we get the best out of our package and get things right."

Andrew Shovlin, trackside engineering director
"We missed an open goal today by not taking the undercut on lap 19. We had talked about it but didn't really react quickly enough to how fast Charles' tyres were dropping. We decided to call Valtteri to do the opposite to Verstappen on the lap that mattered but obviously we should have made that call with Lewis, and made it late enough that they would not be able to react. That was our opportunity to win and it's upsetting when you let something like that slip through your fingers. We ended up boxing Valtteri first to avoid losing a place to Albon, which was the reason we asked him to maintain a gap, otherwise it would have forced Lewis in. With Lewis we tried to stay out to maximise the tyre offset to the leading pack and see if we could get a Safety Car. We had lost the position to Vettel, but we consciously gave up the position to Verstappen to maximise this gamble. The sequence of Safety Cars at the end didn't help our cause but it probably didn't make much difference. It feels like a long time since we won a race and there's no single reason for it, there are lots of areas that we need to improve and we'll be working hard on these areas. We expect Sochi to be another tough fight, we're not taking anything for granted but we're happy that we only have to wait a few days before getting back out on track."