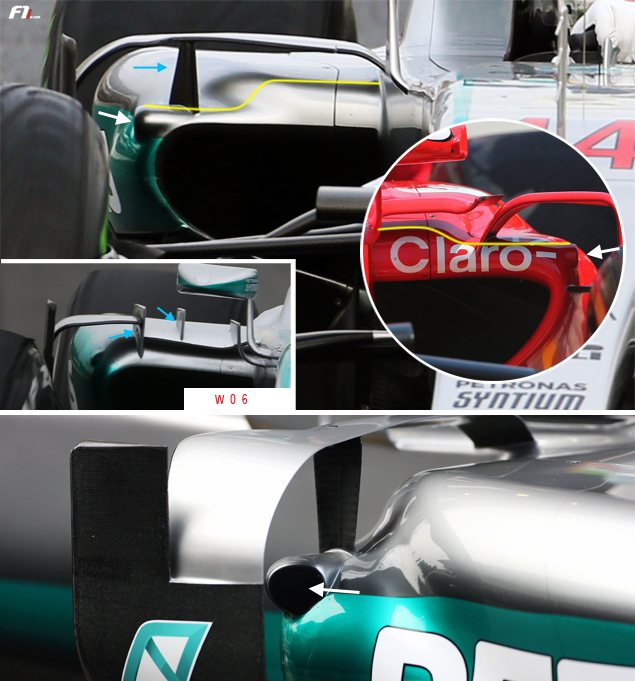 Revamping the rollhoop inlet and repositioning the coolers have freed up more space in the Mercedes W07’s sidepods. If the associated air inlets roughly keep the same dimensions, Mercedes has trimmed down the lower part of the sidepods in order to accelerate the air flowing along the flanks of the car and above its diffuser.

This is an indicator that engineers at Brackley have improved engine cooling thanks to innovative under-the-skin solutions, and this despite the V6 releasing more heat due to the expected increase in horsepower.

Upon the unveiling of the car, executive director (technical) Paddy Lowe declared: “While the car may look very similar to its predecessor from the outside – as is inherent within stable regulations – underneath there are quite a lot of mini revolutions that make up an overall evolution for the new season.”

The outer edges of the sidepods have been planed in order to occupy a smaller volume (which in turn helps reduce drag), just like Ferrari did on its 2015-spec SF15-T at the Spanish Grand Prix.

Just like last year’s Ferrari SF15-T, the outer edges of the sidepods have been planed in order to occupy a smaller volume, which in turn helps reduce drag

As a result, the carbon struts have become visible on the outer edges, while the arching sidepod vane draws some inspiration from the 2015 Ferrari setup with a wider gap underneath the vane. Its function is to bring more energy to the air that flows on the upper surface of the sidepod while protecting the diffuser from the dirty wake coming off the rotating wheels thanks to what aerodynamicists call the downwash effect.

One shall also notice that the sidepod winglet now sits underneath the vane instead of being astride. All these novelties have had other consequences, such as Mercedes modifying the rearview mirrors installation and the associated vertical vanes, which are now closer to the cockpit.

Mercedes has introduced Tuesday morning radical bargeboards, mounted on eight floor vanes that will work much harder the airflow around the sidepods and under the floor. According to Executive Director (Techical) Paddy Lowe, Mercedes code-named it “Floor W”: “We code name things internally, so that they are completely unrelated to what they are, told Lowe, as reported by Motorsport. It means that when people talk about them, nobody really understands what it means, unless they are closely involved.” 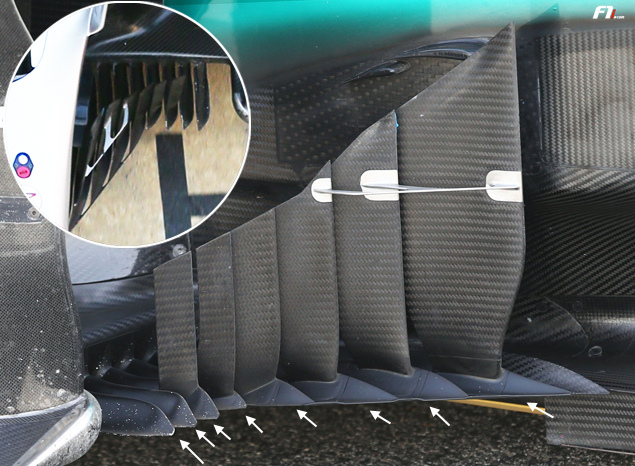