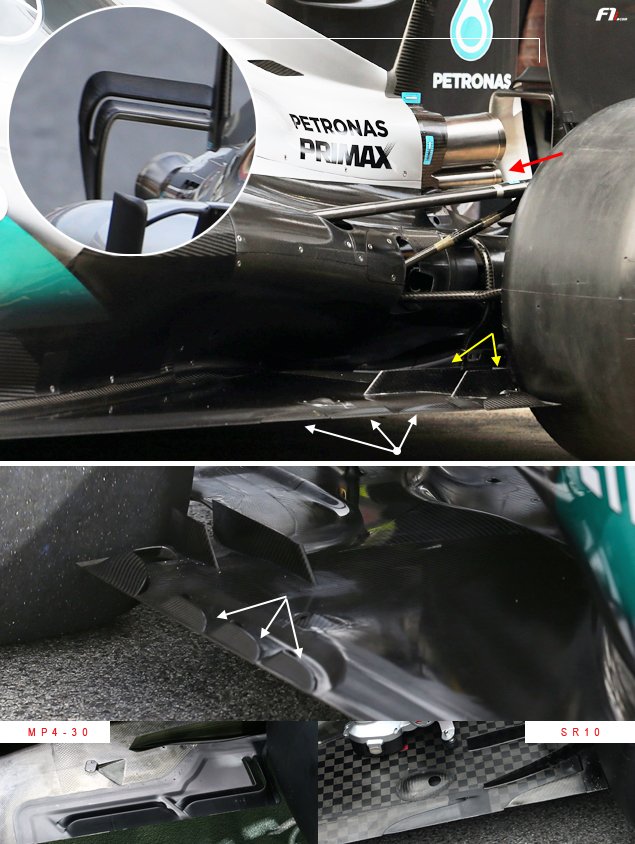 PUTTING THE PEDAL TO THE SLOTTED FLOOR

The rear end of the W07 includes several carryovers from its predecessor: the hooped piece of bodywork (located at the end of the engine cover in the wishbones area); the rear wing and its central pillar, which kept its reversed Y-shaped design thanks to the two wastegate tailpipes sitting underneath the main exhaust pipe (and not alongside like it is the case on the new Ferrari SF16-H). The ‘monkey seat’ is still there but it now is a two-element setup whose mounting point on the rear crash structure has been moved backwards.

The W07 also features several new slots in its floor as a way to fend off tyre squirt. But instead of multiplying the slots like Ferrari or McLaren have done, Mercedes has added three medium-size openings to complement the more conventional L-shaped dent positioned right in front of the rear wheels. These apertures work in conjunction with the elongated vertical vanes attached to the car’s floor.

As always, we will need to wait for more under-the-skin images of the W07 to fully appreciate the scope of improvements brought by Mercedes on its latest F1 challenger, which has been tasked with extending the German constructor’s hegemony in the latest turbo era.